Vancouver     Coming down the hill towards the water, trees on each side were bursting in pinks and reds providing fresh color to a typically cool and damp, gray day in beautiful Vancouver.  I have been in this city a number of times in the last year since I first visited with David Levi and John Kay of the Columbia Foundation about organizing a training program for organizers with their support.

It is always hard building something brand spanking new, and this project has had to flatten some rough spots to find a smooth ride, but it will be worth it, because we all need the organizational capacity being produced between the mountains and the sea up here.  The Columbia Foundation is a different kind of thing.  It’s not a foundation in the sense of something that funds proposals with money endowed by the rich.  It’s an operating entity that utilizes resources produced by social venture funds and business investments connected and controlled by the labor movement and then allocated over to Columbia in a smaller share to create programs and capacity to build the entire movement.

Ken Georgetti, the president of the Canadian Labour Congress, the central federation of unions in Canada, is the president of the board along with the leaders of other large unions and regional federations in the country.  The training program I am organizing, the Community Leadership Centre, is a component of the overall Columbia Institute along with another program called SHARE, which is formulating “capital strategies” to support the movement as well.  These are visionary programs that the Canadian Labour Congress and its leadership have supported, recognizing that the weakening labor movement around the world does not have to happen here, and that the time to increase capacity is while unions still have reasonable density and important strengths and resources, and not after they begin to decline.

So, they asked me a year ago for options, which I gladly provided, and then they called my bluff and asked me to actually organize the program, pull it to its feet, and get it running, and that’s what has me here now working with Viki Jackson, the freshly minted executive director of the Columbia Institute, to pull the last details and pieces together before the first cycle begins in just three weeks.  The Centre is recruiting men and women for a two-year apprenticeship where they will be trained in community organizing by ACORN in the United States, then placed in community and labor campaigns throughout Canada and the U.S. to develop campaign management and skills, and finally placed with organizations to develop projects and campaigns combining community and labor organizations in new formations to increase operating and popular capacity that does not exist today.  Some of the Centre associates are being sent by their sponsoring organizations, and some we are recruiting into slots supported by resources from various organizations and sources.

So coming up to the first training cycle all the preparations and months of meetings, discussions, and conversations finally have to come to real decisions and real people ready to roll.  We are optimistic but seem to still be shaping this thing with wet clay:  finalizing sponsors, putting names in slots, arranging placements, copying the early readings, arranging for extra presentations, and a dozen other things that will be left to the last minutes, lost between the raindrops.  More calls today to finalize acceptances.  Talking to the sponsors in the Canadian divisions of the UFCW and SEIU, along with the CLC, the Columbia Foundation, and the AFL-CIO as well.

These are the times organizers live for — I know I do! — The opportunity to build an institution out of people and hope, hard needs and real dreams shaping futures and creating changes that create meaning and really matter for working families and their communities.  Fighting for the chance to succeed against the expectations and odds of failure, I always wonder why it continues to be so hard.  No answer ever comes to that question, but as long the results are worth it, it ends up not mattering in the end anyway. 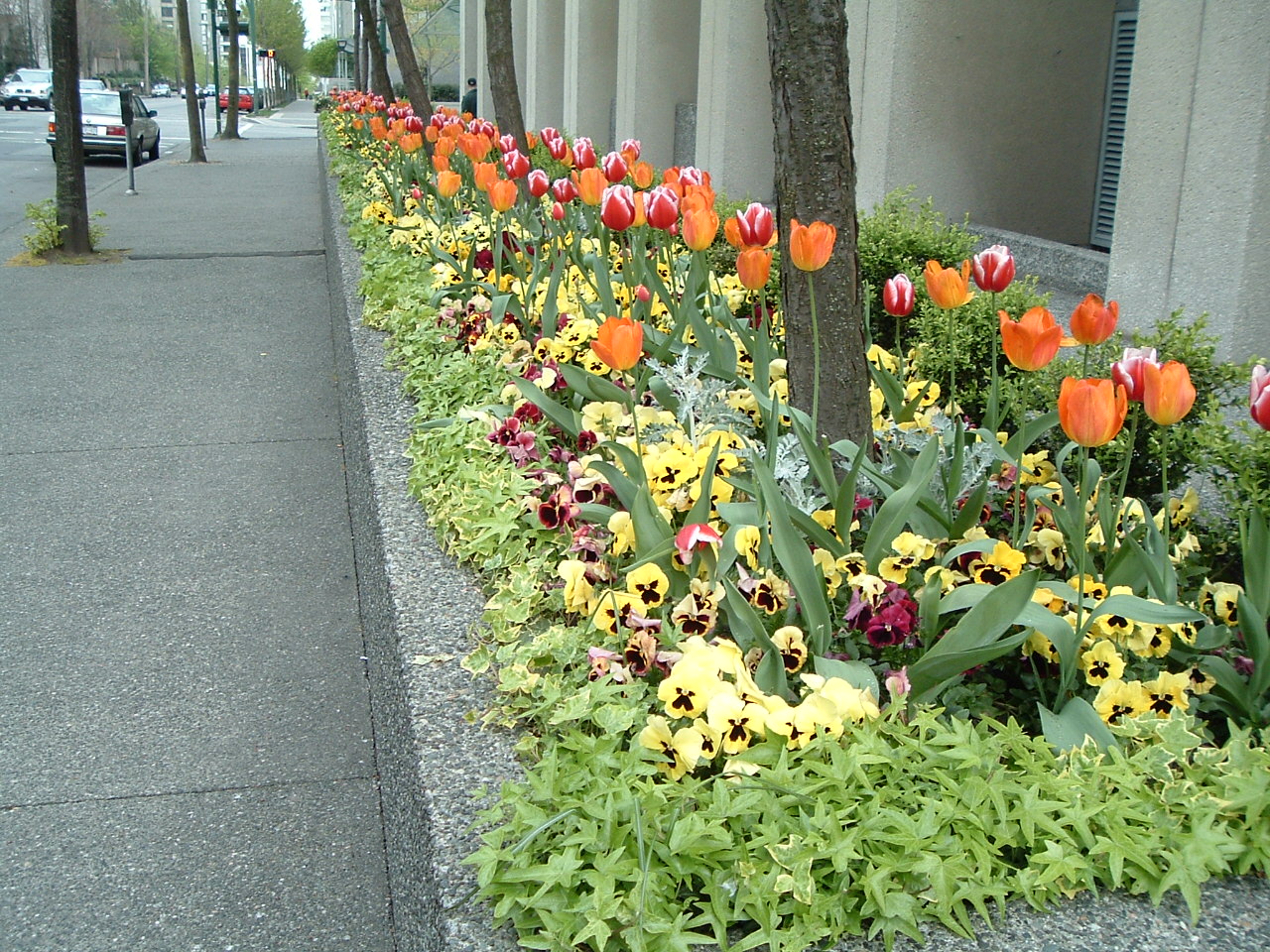 Spring flowers across from the office in Vancouver!