Johannesburg:  Imagine how difficult this is to get right – we are in a foreign country, everyone uses a triple-grip power handshake of sorts, the South African Communist Party is in a tri-part alliance with the ruling party and labor, yet they have embraced neo-liberalism and the Washington consensus including privatization and the whole package, and we have huge unemployment, incredible disparity between rich and poor, and a loss of more than 1 million jobs since the end of apartheid.  So there has to be a left to the left even here, right?  And, indeed there is and quite a robust one at that in a country that has developed a custom and culture of struggle.

At the leading edge of the opposite analysis is Trevor Ngome, an outstandingly articulate and charismatic advocate, who acts as the national organizer of the Anti-Privatization Forum, a collection or coalition of a variety of groups, some of which are community based in particular areas, others of which are issue based around water or electricity privatization, and others are what they call “crisis” committee, which rise up to fight against the sudden shifts brought by something like a water shutoff policy in a particular area or a “retrenchment” which is a downsizing – more than a layoff.  Reading various pieces as we assembled papers coming into South Africa and in our first briefing from Patrick Bond, a professor at Witwatersrand university, and author of a number of popular texts of social analysis and criticism on the left, Trevor’s name was the frequent constant.  He seemed to pop up everywhere and anywhere there was a problem or contradiction.  It was not surprising that after his election as a city councilor from a Jo-burg district his continual critique of the ANC got him thrown out of the party.  He was well spoken, smooth as silk, and stunning in his APF t-shirt and dreadlocks.

Equally persuasive was the chair of the APF, John Appolis, not as well-known but a labor activist with an equally thoughtful critique, who had been expelled from COSATU for his arguments against labor’s involvement in the Alliance.  John to me was one of the most impressive of the many talented people we met in South Africa.  He was now working as an organizer for a small (2000 members) independent union called the General Industrial Workers Union, which was doing very interesting and essential work with modest success in trying to organize informal sector workers.

The last of the APF triumvirate was Dale Lindsay, a South African raised in Zimbabwe whose slight southern access turned out to be a giveaway for a PhD earned over eight years at the University of North Carolina.  He was the communications director of the APF and he had been expelled from the South African Communist Party for his criticism of the Alliance in the post-apartheid decade.

It was easy to be mesmerized by these three men who, finding themselves all expelled from the struggles where they had spent years, had now found a home away from home in this new formation where they could find a voice and a platform for their positions.  APF was in fact run on a shoestring out of another Braamfontein district office so close to COSATU house that it was nearly in the shadow of the building itself.  A little support from Oxfam and a lot of publicity and good placement at the front of any and all emerging social movements had created an organization, even if they lacked the full capacity to keep all of the pieces fully in the air.  Their office still felt and looked like a movement, not another NGO, when one looked at the walls plastered with newspaper clippings on their work.  They were in the middle of the mess.  They had the rap, the look, and history to make the move.

This trio was very impressive, regardless of how little was behind them, they had mapped out a long and hard road.  They dazzled – one hated to imagine any real arguments among the three of them – mountains would move and planets would be realigned!

Whether the Alliance was right or wrong was impossible for us to know at this point in our journey, and we were humble to the task of understanding the full weight of both sides of the debate, but without a doubt APF was testament to the new space in South African political culture and the openness which had been forged to such a fine point that it protected such a sharp counterthrust, whose quality assured no small measure of accountability from the ruling alliance. 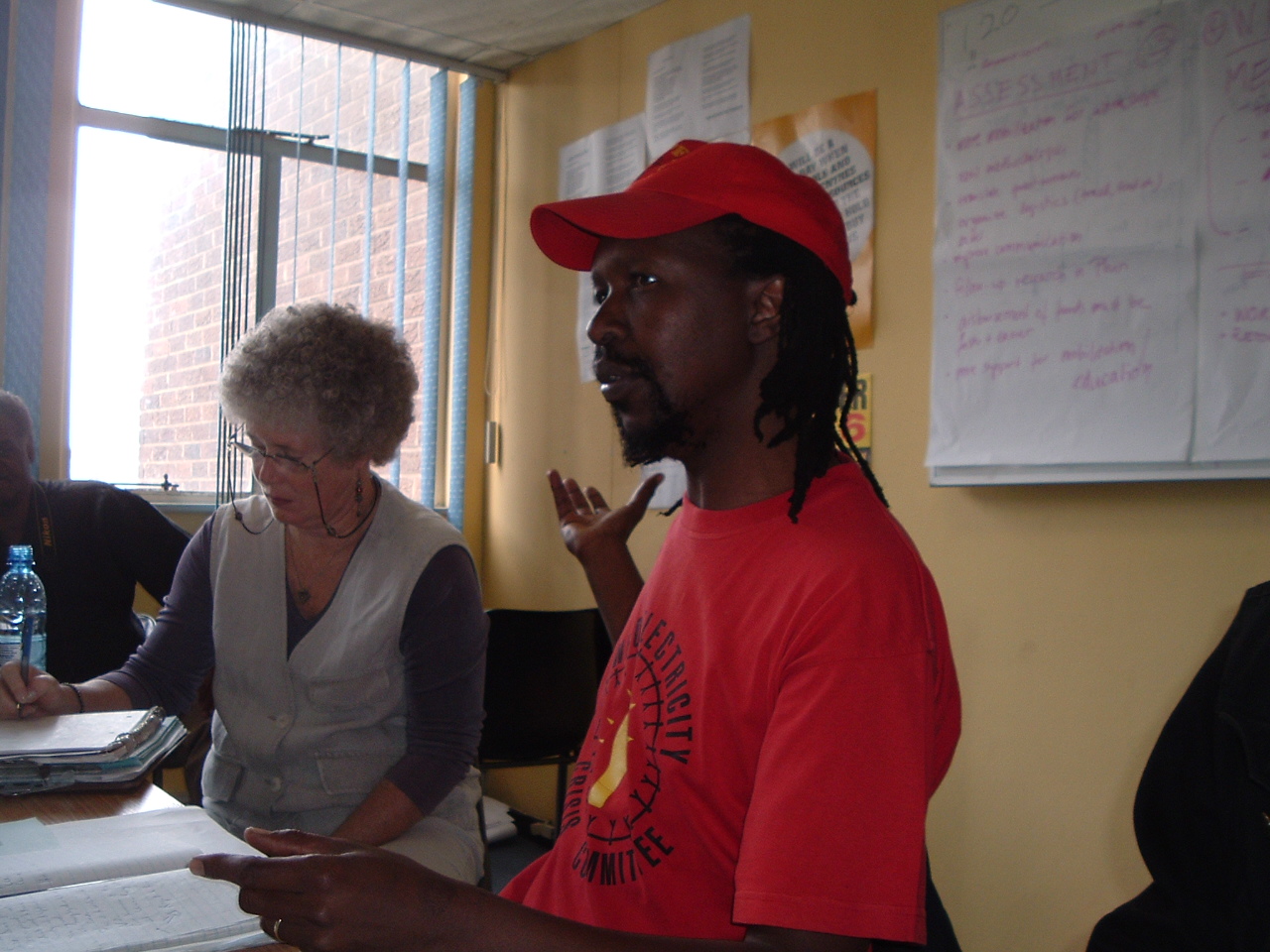 Trevor Ngome, National Organizer for APF, seated next to John Appolis, National Chairman for APF, while Barbara Bowen, coodinator of the Organizers’ Forum, takes it all in.