Chicago:  Ballots have been in the mail for the last several weeks to 49000 home childcare workers in Illinois in one of the largest union representation elections ever conducted in the United States.  Our sister local and one of the pillars of the ACORN family of organizations, SEIU Local 880, is on the ballot and Head Organizer Keith Kelleher and his key lieutenants (Myra, Maggie, Brynne, Matt, Alex, Anthony — you know what a great job you have done!) were the architects of this breakthrough after ten years of hard work — member by member — in building the organization.   On April 7th the American Arbitration Association will count out the ballots, hopefully bringing this amazing saga to a new plateau.

In the world of child care there are three distinct options:  center based, home based, and family based.   In the wake of welfare reform and devolution there was an explosion of home based childcare to the point where we estimate there are 500000 licensed or license-exempt workers nationally now.  SEIU 880 started first in Illinois and ACORN began not long after with similar organizing efforts in Los Angeles, Sacramento, Boston, and Baltimore.  SEIU 880 built its effort up to the point where there were thousands of dues paying members over the years and finally the election of Governor Blagovich gave low wage workers and SEIU 880 — first home health care and now home child care — a politician willing to listen to the needs of poorer workers in new service sector job classifications.  The Governor signed an executive order allowing unions to file for an election and bring representation to these workers.

There was some drama.  SEIU 880 immediately filed with more than 20000 signed authorizations from across the state, but then in the chaos of institutional labor for some unknown reason AFSCME sought suddenly to get on the ballot at the last minute.  Millions of dollars later spent by AFSCME and SEIU as Illinois and the fate of these beleaguered workers became a pawn in a game that did not matter to them; the AFL-CIO ruled that only Local 880 could be on the ballot and that is the way it stands.

ACORN through out Community Labor Organizing Center had almost 50 organizers on the drive at the end as the 35 contracted were swelled by another 15 from Chicago ACORN in the final weeks.  Our experience around the country made our staff a ready reserve to jump in to help get the cards to file and carry over to victory.  Yesterday on the eve of the vote count there was a perfect calm after the storm of recent weeks.  Nothing new could get into the mail, so practically speaking the job was done.  I got to visit for a while with all of the ACORN organizers and Ross Fitzgerald, ACORN’s Home Childcare Director, and thank them for the amazing job they had done.  They could not help point out at the ACORN-Team had led the way in production throughout the drive.  This was a proud group of organizers and it was interesting to hear their questions — they had the hunger and wanted to know after having organized these workers in Ohio, Minnesota, Pennsylvania, Massachusetts, and now Illinois where was the next stop, what was the plan, what would it take to get the job done for all 500000 home care workers.

Illinois and 880 have led the way, but I had to admit that they had asked the right question and a hard question.  It has to be about organizing the whole industry to deliver to workers at this level.

We have forgotten this principle of “majority unionism” too often, and we are paying for the lessons too dearly.  Maybe this will be something we can finally get right. 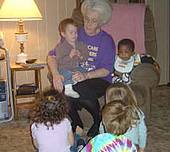 Home Childcare Providers are organizing in Local 880 to build a strong voice for quality childcare in Illinois. 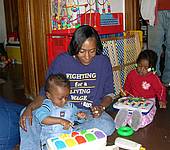