Delhi     There are abbreviations for everything it seems in the language of Delhi. The development of a new transparency in government affairs which ushers in access to information from various layers of government is called the Right to Information Act, but everyone and all the newspapers simply refer to it as RTI.

This becomes a powerful tool like open records or freedom of information acts or FOIA requests in the United States and several of the state governments. It is touted as a model piece of legislation, so it will be interesting to see if it works in practice along the lines of its design.

The staff of the FDI Watch campaign being developed by ACORN and WARN in India was excited because we would be able to find out exactly what the dealings between various levels of government has been with Wal-Mart and what — if anything is beyond the pale and below the surface. If there’s been hanky-panky, we want to find out where and how much?

We met all day with the help of Ashutosh Saxena and his staff. R. Ramasubramanian, who is in a masters’ program at Nehru University in New Delhi was a big help. I met Himani Sethi, who would be coming on the staff full-time as soon as she is finished with her maternity leave. Our friend from Chennai, Prithvi Prithiviraj with CARE Trust, spend the two days with us as well hammering out the plan. We made a detailed work plan over the next 6 months so we knew what it would take to win.

As modern as technology has become, it is still hard to beat the enforced concentration of a face-to-face meeting where everyone rolls up their sleeves and starts trying to figure out what it takes to move on the world’s largest countries and the largest companies I the world. We spent the time and sketched out monthly actions and tasks, listed them in detail, and left ready to go! 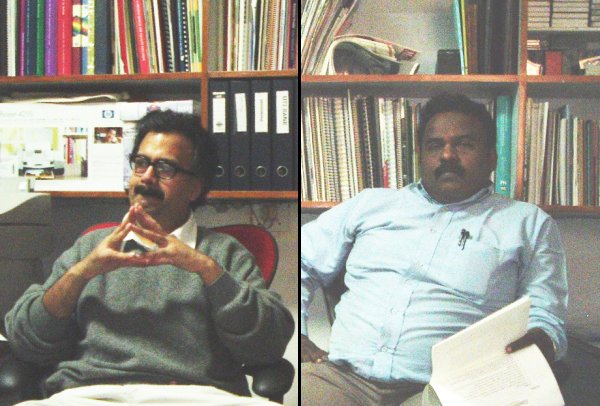 Ashutosh and Prithvi in the SARDI office helping make the organizing and campaign plan to stop FDI in India.