New Orleans     One could become cynical, but in New Orleans this just all goes under the category of “bought lessons” and hard realities. Eleven weeks out from the hurricane as so little happens and the housing stock continues to sink into the now grey and lifeless ground with the rains soon to follow and worse to come, one sometimes believes that nothing is happening, because in fact there are powerful interests who want nothing to happen, because they benefit from the mess. There are starting to be too many examples of vested interests getting their way with public policy on programs that they have long advocated and are now using Katrina to exploit their strength against the weak leadership and chaos all around the city.

One debate on the front pages of both the local paper and even the august New York Times has to do with the plans promoted by the Urban Land Institute. Elsewhere ULI may have some credibility, but here it is impossible for this crowd not to be seen as a stalking horse for Joe Canizaro, the premier area developer, the former president of ULI, the Bush pioneer, and the de facto head of Mayor Ray’s rebuilding committee. Joe has already been quoted since the storm with such excellent proposals as building houses in City Park! He has also stirred up some bad feelings on the rebuilding committee since he and his developer buddies have lunch before the meeting and hash out the business before the meetings. Joe was also the architect of the infamous meeting after the storm of business leaders in Dallas where Mayor Ray took notes on what needed to be done now.

The heart of the ULI plan is an argument to stagger the rebuilding effort from the easiest to the hardest areas in order to concentrate and focus resources. This would mean in their plan a 3-stage effort with recovery efforts focused first on the historic footprint of the city (where there was no flooding along the river and so forth), and then on the next stages. The third stage in their proposal would likely have some entire communities in the 9th ward, New Orleans East, and even Lakeview, become park and wetlands. This part of the program was similar to the controversial advocacy right after the storm by a Tulane geographer. The difference being that he wanted the residents of the areas to be surveyed concerning their interests and whether they planned to return first, while the ULI folks do not want any resident input, since they want to manhandle entire communities into this program. The ULI folks in fact want to discourage people from rebuilding and returning to their homes.

This is an unbelievably arrogant and anti-democratic plan. That is not to say that all of the participants are evil, just that they are the developers and politicians and other folks from outside of New Orleans, who want to react to the stereotypes of the City, rather than the facts, and want a autocratic and bureaucratic decision, rather than a democratic one, since who knows what people themselves might come to decide about their homes and neighborhoods, I suppose. They also believe that all of the finances of the city should be given to someone else for now, and a number of other wild ideas.

Planning without people! Seems to be the modus operandi here — why is this seen as a popular and front page idea?

Maybe because it works? My brother, daughter, and I all went to a public high school in New Orleans called Benjamin Franklin High School. This was a magnet school before there were such things. One tested to get into the school, and almost everyone who graduated went to college, so it was a shining light. It was also the first high school in New Orleans to be integrated, because there was nothing separate that was equal. We got a letter in the mail from some “alumni” group trying to raise money for the school. Seems it was now going to reopen as a “federal charter school” run by the University of New Orleans, which had been trying to take over schools from the school district for years. The board was going to be the chancellor of UNO, the head of its education department, some lawyer buddies, and one parent. The website said they were not sure what teachers would return, since a lot of them might not want to lose all of their seniority and benefits because the school was going to go non-union.

Somehow they had gotten Governor Kathleen Blanco to waive the requirements of a vote by the board, the parents, and the students which was required to create charters until Katrina.

Now they can steal the best high school in the city without a vote or a never mind.

I guess others think that they can steal homes and communities the same way. 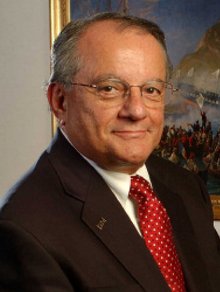 Joe Canizaro is a developer, a Bush pioneer, a former president of Urban Land Institute (ULI), and the de facto head of Mayor Ray’s rebuilding committee