Chicago             The Organizers’ Forum board facing the impossibility of getting hotel rooms in New Orleans (we tried!) decamped to Chicago for our board meeting continuing the post-Katrina dislocations.  We took advantage of our visit to invite some organizers from the windy city to brave the snow and come visit with us and catch everyone up to date.  What a treat this turned out to be!
If one of the things I was reminded of in Hartford was the lack of time in my schedule for any review or reflection, Chicago reminded me that in the crunch of time, calls, schedules, and technological interventions and interruptions of cell phones, email, blackberries, treos, and the rest, sometime it helps to be part of a “captive” audience so that you can listen to some things carefully.  Hearing our Chicago-based colleagues talk about their current work and campaigns was just such an experience — and a welcome one!
We started with a detailed presentation by Mike Kruglick of the Gameliel Foundation’s national staff who is working extensively with their metropolitan operation.  Among other things he detailed the campaign that they have done with others to take advantage of hiring preferences in the Transportation Act.  This campaign clearly looked like a winner, requiring a couple of moving pieces to be lined up, including local ordinances, but then providing up to 30% local hiring!  I can see why ACORN jumped on this in St. Louis and why Laura Barrett had been lobbying me.  We ought to do this everywhere!
Jomarie Argriesti, Organizing Director for UNITE/HERE Local 1, laid out the risks and opportunity faced in hotel organizing in 2006.  The union is rolling all the marbles and hoping that by bringing together contract expirations in some key cities (Chicago, New York, Honolulu, Monterrey, Los Angeles, San Francisco, and a couple of others), they will be able to create enough leverage, particularly with the Hilton and Starwood chains, to get neutrality or recognition agreements to increase their density.  She sees it as a “make or break” time for the union.  One has to admire the fact that they are going for it!
Keith Kelleher, Head Organizer, SEIU 880, told the story I know well of their great victory in winning the election and contract covering almost 50,000 home child care workers in Illinois in 2005.  Joseph Geevarghese of SEIU’s Hospital Accountability Project that has been focusing on the Advocate chain in the city gave a detailed report on the four years of this effort and the results in moving increased accountability, charity care, and other reforms at the hospital.  70,000 hospital workers are in the market and such an effort once again reminds organizers of SEIU’s discipline in hunkering down to develop winning programs.
It was a pleasure to introduce Madeline Talbott and remark on her 30 years with ACORN and the brilliant job she has done in building ACORN as a powerhouse in Chicago.  This was an operation I knew so I should have been able to sneak a look at email and this, that, and the other. But, the greater pleasure turned out to be listening closely to her dramatic, soft-sell.  First, Madeline mentioned on this freezing day in Chicago that last week, she and her staff had read the advance weather report and realized that Wednesday was going to be near zero.  For Chicago ACORN this turns out to be a 2-minute drill every year to gear up their program to push the Chicago City Council to increase the distribution for low income heating and utility assistance from the windfall amounts they are receiving in utility based taxes.  Immediately, Chicago ACORN was all over the council trying to push the levels from the $5 million they have won in the past up to $20 million now.  Secondly, Madeline noted that with elections within the next year or so in Chicago, in this highly politicized city, it meant that the leverage ACORN had took a seasonal leap.  So, operating the levers behind the scenes, Madeline and the troops of Chicago ACORN, were not surprised to see alderman climbing over themselves to support the improvements in utility relief and some of their other programs.
Then as a throwaway, Madeline, explained their “grow your own teacher” program and the benefits that accrue on every level in the community, for the kids, and even on test scores from synchronizing hiring with educational and community interests.   Not an easy effort, but a compelling one from the information Madeline shared.  In 20 minutes she was up and then down in her seat again, and one was left wondering what needed to be done to move the program outside of Chicago.  Everyone finally got it!
Similarly, listening to Bruce Orenstein of Chicago Video Project, and Luisa Dantas, who been one of the producers for the recent Wal-Mart movie, all of the board was engaged in debating how to use media more effectively.  Forced to think, we made progress.
Struggling for time and battling our limited attention spans, reminds us all that we sometimes are missing the things we have right in front of us, while we are concentrating our sights miles down the road.  I hope I remember that after I fight my way out of the snow of Chicago and back to the dusty, darkness of New Orleans.
December 9, 2005 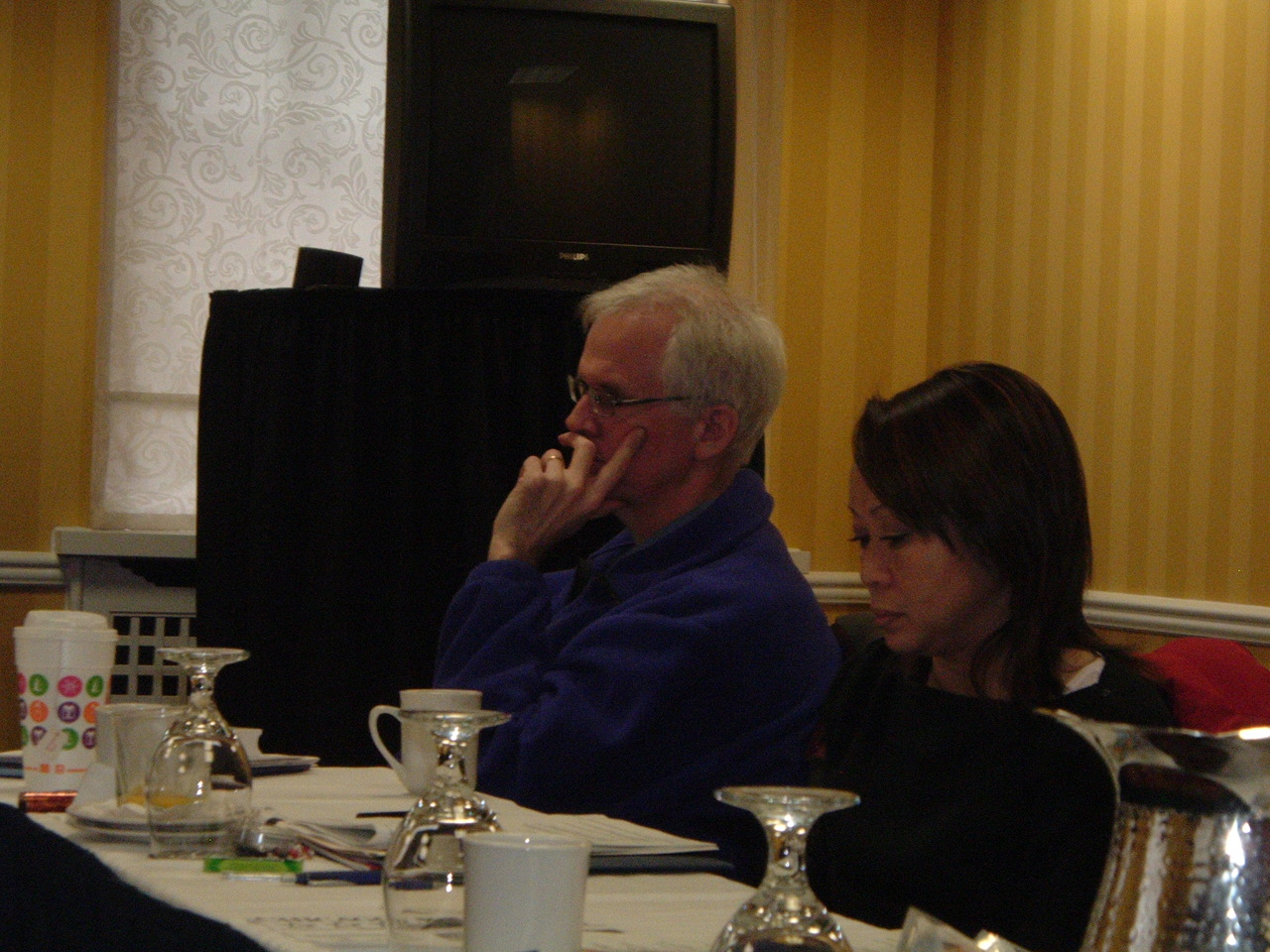 Keith Kelleher, Head Organizer of SEIU 880, with Tho Do, Secretary/Treasurer of UNITE/HERE Local #2 in San Francisco, at the Organizer’s Forum
Kruglick, MAC, of the Gameliel Foundation in Chicago
Jomarie Argriesti, Organizing Director of UNITE/HERE Local #1
Madeline Talbott, Head Organizer of Chicago ACORN presenting at the Organizers Forum
Madeline Talbott presenting with Greg Galuzzo
Bruce Orenstein of the Chicago Video Project 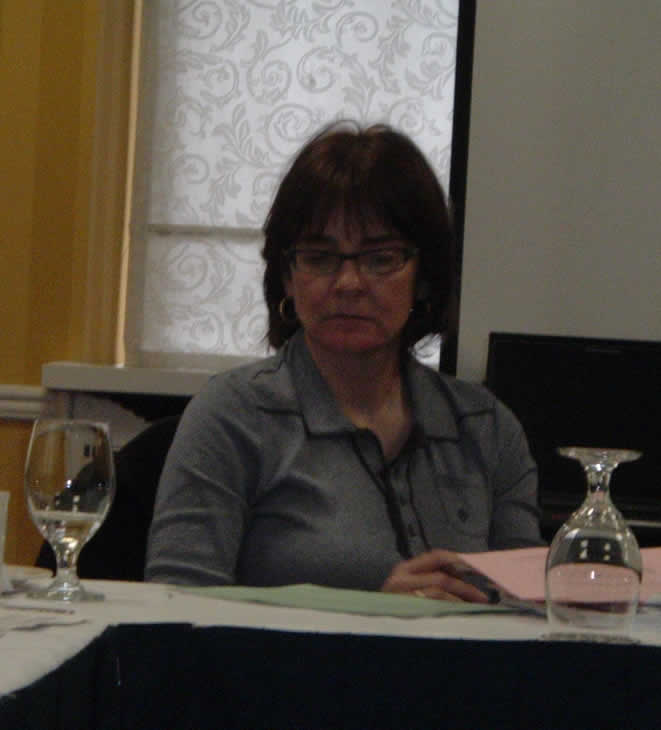 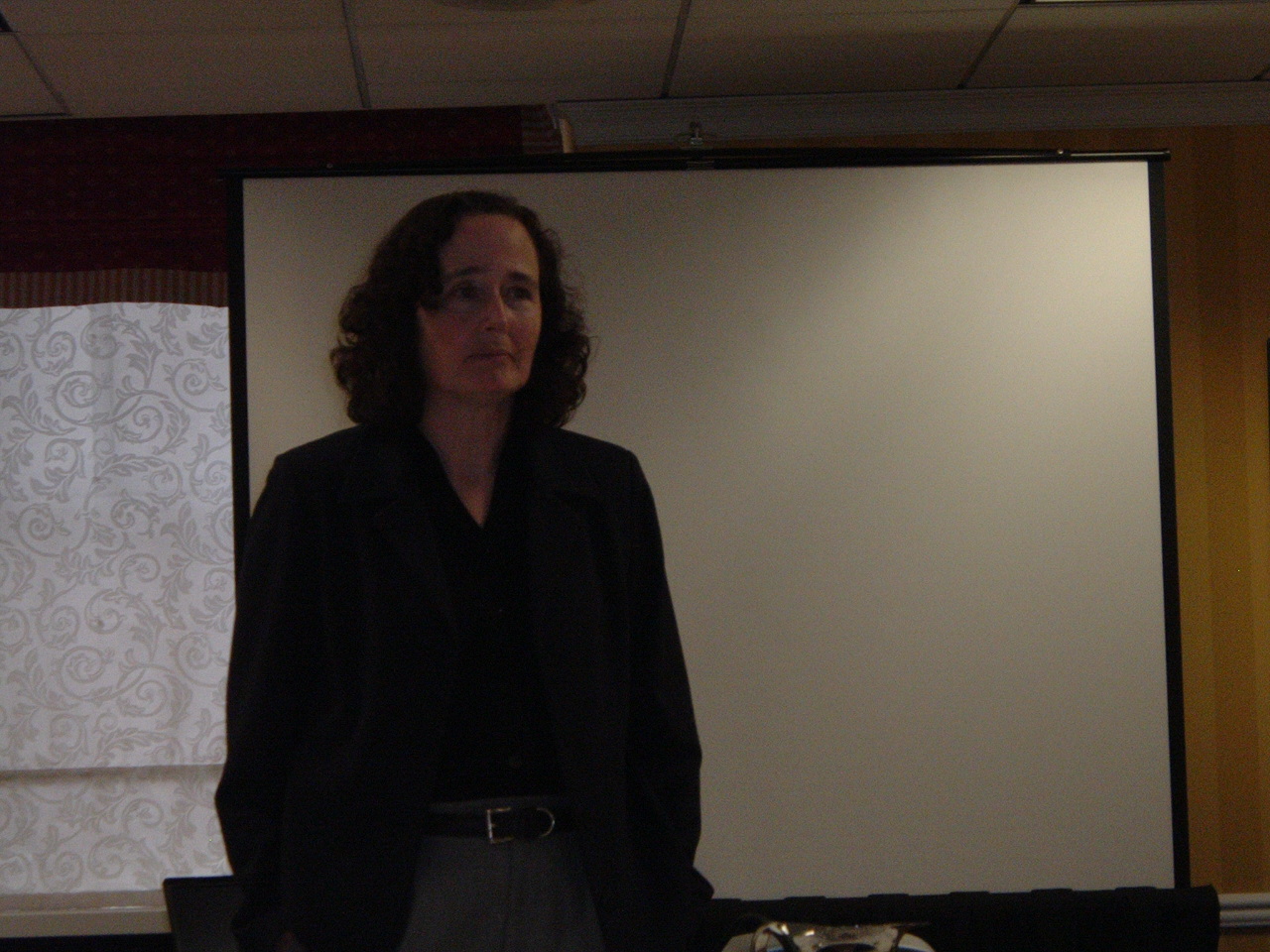 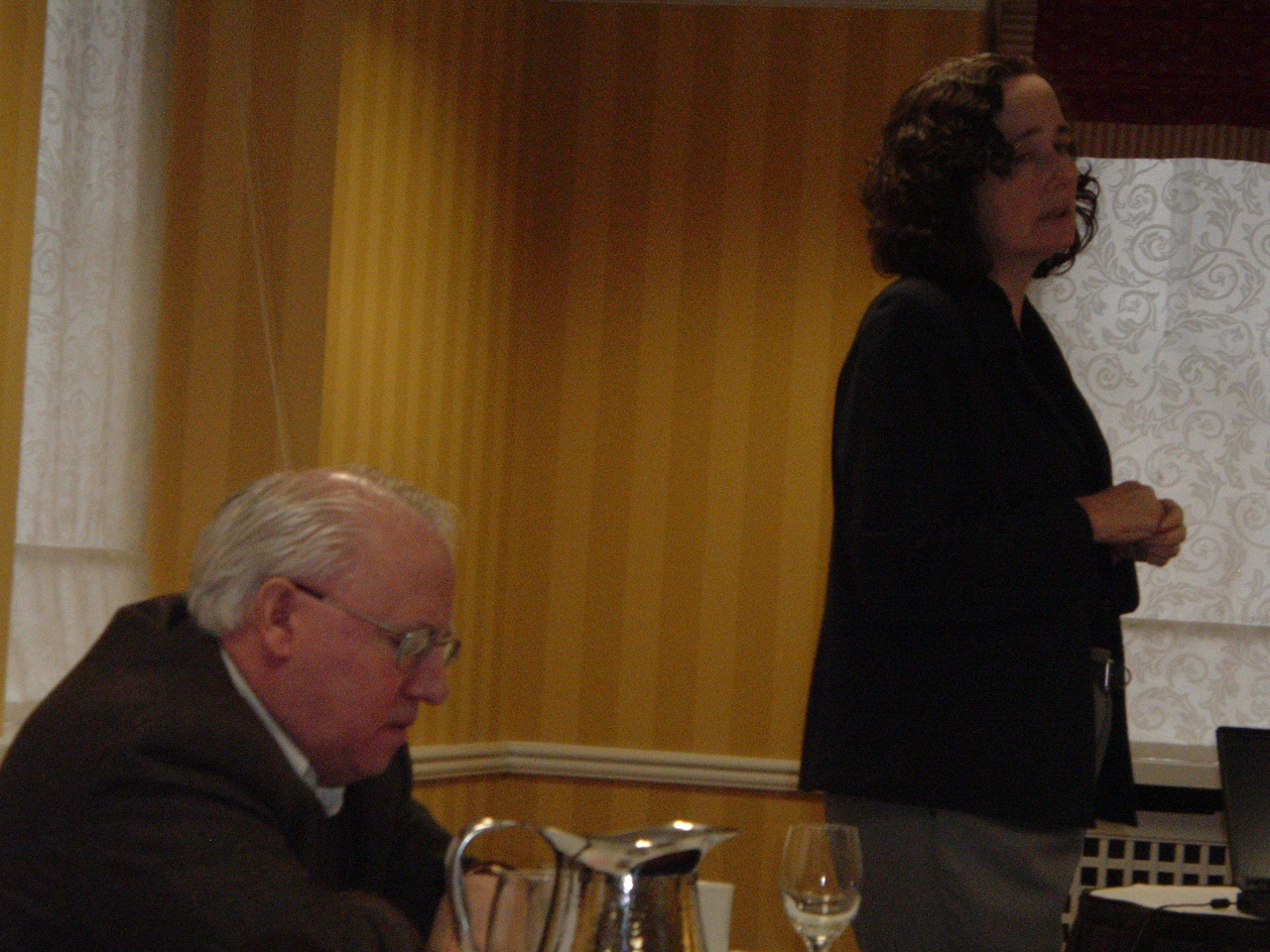 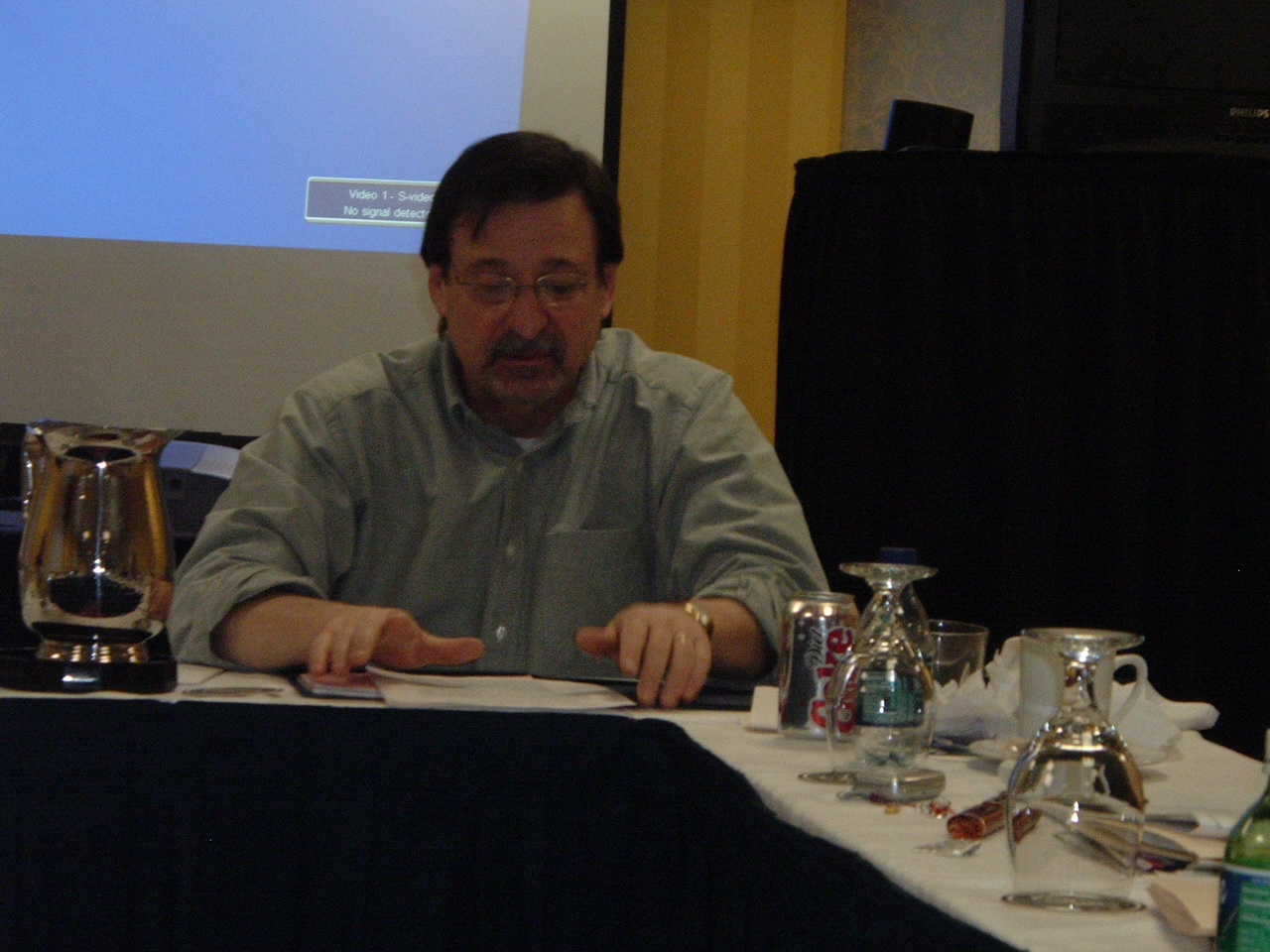