San Luis Potosi      News of a bill passing at least part of the Congress seemed like we had a chance still for New Orleans to survive.

The world of New Orleans work stretches down to the central Mexican highlands.  A man on the street asks where I’m from and when New Orleans is the answer, he asks for confirmation that there is plenty of work at good wages for everyone, and I agree.   We have won the living wage in New Orleans finally; we just don’t have places to live.

My phone rings at breakfast around the demand for blue tarps on the slate and tiles of New Orleans roofs rather than FEMA pretending the roofs are the same as the rest of the country.  The next set of rollouts is around the demands around mortgage companies to stop charging expensive penalties on early buyout!

My phone rings in the afternoon about the few jobs left for our Local 100 workers at the Regional Transit Authority.  It looks like FEMA will pay for the busses to roll for free for another six months, but pulling the workforce back to the jobs will be slow.  Very slow!  The RTA was headquartered in New Orleans East, but not now.  A skeleton crew was working out of the Carrolton bus barn.

I shared the amigo’s street side comment, and the RTA official only said, tell everybody from Mexico to come up here so that something can get done before we lose it all.  It was off the record, but it was clear, there’s no happiness in Mudville, yet. 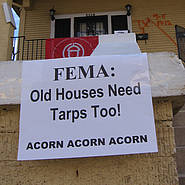