Ankara      Not easy figuring out the way unions are put together in Turkey, but after several meetings, it seems possible to sketch out the basic process.  We talked an organizer for the printing and packaging union at some length, then met with the executive committee for a unionized and recently formed cooperative printing operations, and finished off the day with a group of both general worker construction unions and public sector unions in the same general fields.  Most of these groups were with the largest confederation Turk-Is, whose main building is just around the corner form our hotel as it would happen

These are the key ingredients:

* To organize a workplace a union has to meet two tests successfully:

o 50% plus one of the workers have to physically present themselves to the Labor Ministry and register as members of the union and pay the equivalent of $20 USD, and
o the organizing union has to be certified as representing at least 10% of the overall sector.
* Companies do bargain with the unions at that point, but the right to strike has some limitations in breakdowns in bargaining.  There does seem to be compulsory arbitration.
* There are not separate “trade-based” unions in construction (like plumbers or electricians) but instead most of these are general construction unions.
* Dues are relatively high and the government sets a maximum of about $30 USD per month.  There is check-off and easy collection, but only from members, not from all workers represented.
* Most wages are paid monthly.  Minimum wages are sectoral and most seemed to run along the same lines as Mexico at about half the US rate.
* Unions with the public sector represent about 13% of the workforce, similar to the US.  The percentage has been declining.
* Leadership believes that division in the labor movement with 7 different federations between public and general worker groups is a problem hurting organizing and bargaining.
* About 50% of the public workforce is women but only about 20% of the public sector union membership is women.
* Public sector unions are not allowed to be in politics, though general worker unions are.  There is no worker based party.
* Privatization is a huge issue and unions are not doing well at connecting to community based organizations in civil society to build alliances which might help win.

Unions seemed uniformly to believe that things are getting harder and harder for them.  They both conceded that they needed to do more organizing, while also agreeing that they were not resourcing and implementing much of an organizing program.

They also were clear that they faced fierce employer opposition without much political support whatsoever.

If we were looking for good news from labor, we were going to have to look some other place than Turkey. 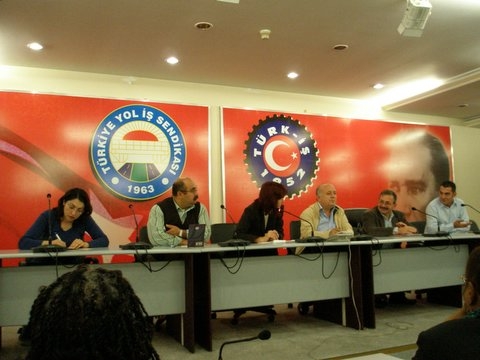 Meeting with union leaders at the construction workers union building and board room.