Istanbul      DISK was the third labor federation (of 6 or 7 in Turkey) that we visited a short metro stop away from Tiksim, then a walk, and then a climb, but all that is welcome to beautiful Istanbul.  We ended up getting to meet with the General Secretary of the entire federation, who was also the former head of the Textile workers affiliate, the largest of what made up the federation.

The current president and his education director were almost too solicitous, and it was clearly an honor for our delegation to meet the big boss of the federation, but it did not take long for us to figure out why.  We somehow represented a “thawing” out of the relationships in world labor with this militant, left-wing federation.  Listening to the education director’s recitation it became clear that he name each and every one of the representatives for the US labor movement that had visited their federation and all of these visits were exploratory and all dated back only in a few years.  Somehow our motley delegation of working organizers from community organizations and unions that had come together as part of the Organizers” Forum (www.organizersforum.org) from the US and Canada, represented another step back into political respectability for this federation.

They had gone from 700,000 members before 1980 to zero members after the coup.  The DISK president was social and good natured with a winning smile, and it was hard to image the self-discipline and peace that had allowed him to reconcile 4 years of jail with a death sentence to the place where he sat now visiting with us.  We later learned that the international affairs rep that did the translating (and a fine job at the meeting) was actually his daughter to boot!  It was not until 1992 that they had gotten through all of the court suits (which they won) to recover some of their property and buildings, even though they could not recover their members and contracts, to the point where they could finally start over.  They had come about a 1/3 of the way back in their rebuilding program with the strongest piece the repair work in textile.

They had finally heard from UNITE-HERE.  They were looking at a big organizing drive on 1000 workers at a Hugo Boss plant.  They were knowledgeable on the details of a drive and the tricks of the trade when we got to really talk to their organizers, but this was textile, so it was hard not to think they were moving from the frying pan into the fire.
One of our delegation asked the obvious, which was how they could keep from losing the textile industry in their country, the way that we had lost it in our own countries.  The answer was long and detailed and came down to international solidarity.

I could not believe in their strategy, but I had to admire their optimism in the face of adversity.  Here were union leaders who had been shunned when they were branded red and jailed without enough international labor solidarity to stand up for them and their members.  They were smart, creative, and aggressive, yet they were still hoping a quarter of a century later that somehow this time it would be different.

This is a sad story, and I did not have the heart to do more than hint to them that international solidarity was hard to calculate given the weakness that we all faced in our social movements.  As a movement, we have a lot of shame on our steps for not being willing to defend workers and their organizations, come hell or high water.

They have seen a world without either justice or solidarity, and it simply has not changed enough to make a difference today. 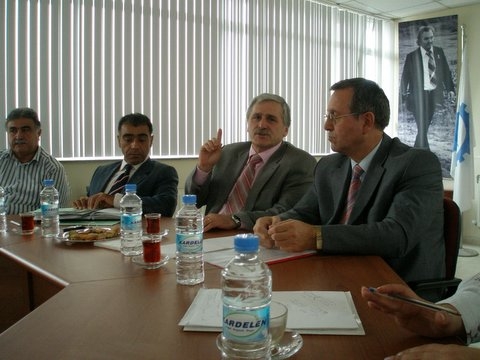 The head of DISK makes a point.
Former leader of the textile workers marching with his bare feet to prove that there is nothing they won’t do for justice. 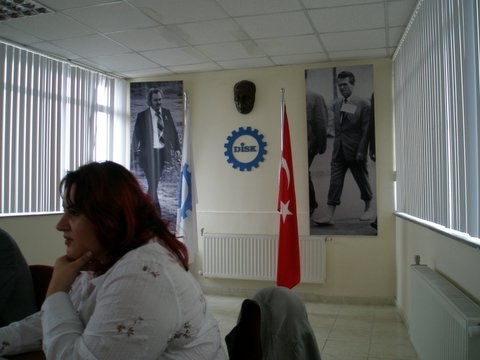