Amman        I spent a couple of interesting hours meeting and briefing the Solidarity Center staff in Amman one morning.  It is interesting to imagine having responsibilities for countries that range from Palestine to Jordan to Iraq to Bahrain to Tunisa and others in this troubled area on one agenda or another.

As always, I learned more than I taught.

The most interesting conversation was about dues.  In Jordan the dues turned out to be somewhere around .70 JD or Jordanian dinar.  This would be perhaps the equivalent to a US dollar per month.  The relationship with the state was such that many unions were supported by a combination of government dollars and programs more than they were by membership dues.

We stumbled on to this understanding while trying to do basic “organizing math” with the assembled staff.  I gave them the example of the Textile union organizing staff in Istanbul that had 20-25 organizers.  I asked them how many new members did they believe should have been recruited by this organizing program?

The answers were all over the map.  They were all low though.  Very low!  One person suggested a total of 200 new members being recruited as a first guess.

Once they got their heads wrapped around the problem they understood the challenge a little better.  If an organizer in Jordan cost 800 USD on salary, office, expenses and so forth, then they began to figure out how many members it would take to begin to even pay that person much less allow the union to grow.  Perhaps it helped them to have a simple formula to begin to understand how to look at growing unions in this part of the world but the staff was quickly clear that this was not a language that people were used to talking in the Middle East.  Nor much of anywhere else, I would guess.

Part of it comes from the nature of the beast.  The Solidarity Center operations are not funded by membership dues from union members for the most part but by grant dollars.  Historically much of this funding was from US AID (Agency for International Development) and the admission under George Meany — Lane Kirkland that they had CIA money has left a long shadow in many countries around the AFL-CIO program.  These programs in the Middle East are funded more by NED — National Endowment for Democracy — and other Bush initiatives in the region.  The Bush focus is moving the money in block grants to countries which will impair and endanger the Solidarity operations even further, since renewal could be contingent on local country relationships.  In short the staff is less a union based and building staff over time that folks involved in high level government grantsmanship.

That is math all right, just not organizing math in the strictest sense.  It is about contingent operations and renewal cycles, rather than the sustainability that comes from dues and real programs.

This is a mindset challenge that will be hard for the experienced union folks to fix, and in many of these Solidarity Center operations the experienced union hands are hard to find.  These are frequently just another type of NGO job on the international scene as divorced from dues and grievances as from here to the moon. 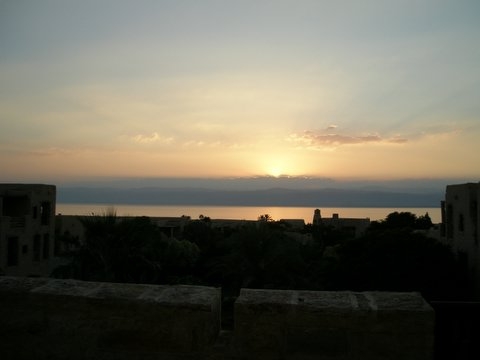 The dead sea on Jordan’s border.