Oslo        Norway was a short course.  Three meetings in less than 24 hours:  NORAD, the Norwegian Development organization with a view of the water, LO, the giant labor federation with its huge building overlooking the former bazaar, and finally Norwegian Church Aid, a huge NGO hidden discretely around the corner from the heart of the city.

There were children about in all of the offices.  An annual harvest day dating back for years when kids were needed to help bring in the crops before the frost of fall, an example here of what now seems quaint that used to be essential.

The labor federation representative I met with told me he didn’t think it was a holiday, but he gave me a handout on the benefits that every citizen has in Norway, and I could quickly see why he might have been confused, since the labor movement seems to have parlayed their 70% density into a social support system that is breathtaking.  44 weeks off for parental leave at 100% salary or a full year at 80% salary.  A family allowance for ALL children under 18, regardless, another allowance for all children between 1 and 3 in day care, 10 sick days just to take care of children, 52 weeks of paid sick time (oh, and make that 30 days if you are a single parent!), and let’s not even look at pensions, disability and the like.  Ok, you want to know about vacation don’t you, just so you know how workers live in heaven?  5 paid weeks for “ordinary workers” and six weeks for workers over 60 “covered by agreements,” which is to say, union workers!  Hey, but they don’t have snow days, and I bet they need them!

Gaim Kebreab is the Senior Advisor on Economic, Political, and Social Rights for Norwegian Church Aid, and he has pulled together several of his colleagues involved in various parts of this huge NGO.  Their normal partners are church federations of different kinds, but as he frankly conceded, such partners can be critically important and very powerful because of “their constituencies” as he called them, but “they are very, very slow to act.”  On the other hand their smaller, advocacy projects were “mobile” but often too marginal to matter.  He quickly understood that ACORN might be the missing link in the middle.  He also understood that there had to be a way to convert the success of “service projects,” that I quickly conceded were not our strength or interest into pressure and change and the fact that it took an organization to do so.  Brother Gaim may not have bought the whole package on this cool, first fall day in Oslo, but he sure got it all the way.

He made another point of prediction perhaps more to his colleagues than to me.  I rapidly concede in all of these meetings that we work in cities around the world and though we totally respect and admire all the work in the country side and rural areas, we are not able to or skilled enough to have developed a way to build organizations with any hope of sustainability in smaller settings.  He mentioned that though Norwegian Church Aid was not there yet, nor were most of the developmentally oriented NGOs, they were all “going to have to move towards the cities” because it was “really not up to them to decide where people should live” and they were finally going to have to deal with the issues where “people themselves had chosen to live.”

We offered to help them get there faster.  He parried that he was glad we would already be there.

This would be a powerful, profound, and wonderful partner for us if we can figure out a way to put it all together! 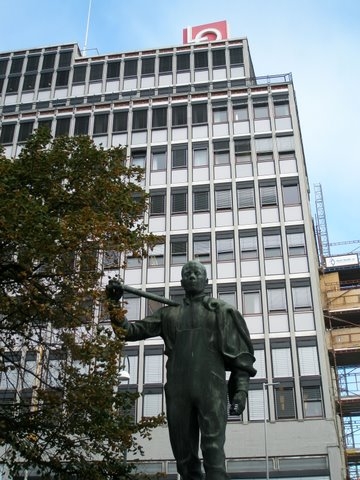