London         I was very lucky on this trip. I got to meet representatives from the central labor federations in all four of the countries I visited, and if you added Russia to the list, where we met another two federations, I was able to get a very good hearing from labor unions. There is no question that the unions in the Scandinavian countries are among the strongest in the world. All of them command levels of density (over 70%) that would be the envy of workers and organizers anywhere. Their offices were well-appointed in central locations in sometimes grand buildings speaking to their success and status. They had achieved the level of strength that even when governments moved from left to right, they were largely unaffected on core issues and positions.

Yet in my meetings with labor federations I pretty much routinely struck out. I was talking an unknown language about organizing unions in a context where there was not really adequate translation. There was one area where I got my butt whipped from one end of Scandinavia to the other: advocating the organizing of unions of informal workers. Perhaps not completely and totally, since there was some interest and perhaps every once and a while a flicker or blink that made me think there might be some thinking about it all later, but I was getting shut out cold. And, frankly, there was more interest in organizing informal workers than in supporting our India FDI Watch campaign to hold Wal-Mart and other big box retailers at bay. I kept going to the meetings and making the case, but I just couldn’t make a sale, or at least not to the federations themselves.

I came closest in one meeting in Stockholm to getting some traction. In another meeting with my last federation in Copenhagen I found a fellow traveler of sorts who understood the issues at stake and the inadequacy of the labor vehicles that could deal with organizing at the scale I was proposing. He was critical of some of his contemporaries and neighbors, but it was the voice of frustration more than anything else. His federation and several others had supported SEWA (Self Employed Women’s Association) in India and that was the case study example of informal worker success with their hybrid self-organized programs and small enterprise projects. The argument in India and elsewhere about whether or not they are even a union continued to get voices on both sides of the question on my trip. In some meetings I enjoyed they laughed at their recent affiliation with the International Trade Union Federation and in others my friends were as adamantly in citing the same affiliation as an example of their success. Unions in India, hardly the gold standard of organized labor’s strength, continue to scoff at SEWA. But, hey, at least there was recognition of the huge need to organize informal workers. There was a glimmer of hope in Denmark in talking about a union being supported in the Philippines among informal workers, and I need to find out what can be done there.

I pushed for organizing drives among the 100,000 cartoneros (or recyclers) in Buenos Aires and the 400,000 ragpickers in Delhi alone that do the same job. I touted the prospects for a huge campaign in Ecuador among the 950,000 bananeros and workers in cut flowers. I had a number of people intrigued about the notion of “majority unionism,” but still no one willing to take up the standard.

Why? I need to figure that out.

Partly, these federations are operating as international NGOs for their federal governments and regranting monies for them. Some were committed to working through GUFs (the global union federations) and others through the existing labor formations, and I quickly conceded that many of those federations needed more capacity. In the same way that in Russia our friends claimed there was no word for “organizing,” this may be the case among the brothers and sisters in the labor movements in Scandinavian that have mastered collective bargaining and social policy and may no longer have the skills or imagination to understand how one would organize mass movements of workers into collective formations particularly in non-traditional ways. They worked through partners, so in some ways, if the partner was not doing these kinds of campaigns or organizing, then it was all interesting, but a non-starter.

Perhaps it is a situation where if there is a plan and work on the ground, then resources will follow? Perhaps these federations with all of their resources need to see it on the ground to fully understand it? There are some sleepless nights ahead trying to puzzle this one out. 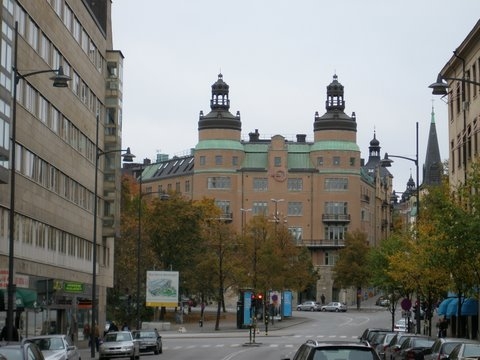 The offices of the national labor federation of Sweden