Seoul         Korea has had an excellent set of labor legislation, providing good protections. They were too good perhaps in the view of the International Monetary Fund (IMF), which made gutting some of them a condition for bailout loans during the financial crisis here. It turns out that part of the impetus behind my invitation to speak around the country to various groups and public forums is partially to commemorate the disasters of the IMF, ten years later, and to look at the conditions now and what can be done about them.

Unemployment during the period prior to the crisis was remarkably low. It is an issue now, partly because of its rarity and the fact that unemployment is almost a cultural marker of sorts.

The other term frequently discussed has to do with “irregular” workers. This is an unusual concept when one first hears it, but unfortunately it seems to be another name for something too common around the world. Irregular workers are a broad category referring to everything from contingent to casual to temporary to informal workers. Critically though in Korea, just as in the US and so many other countries, these are workers without formal protections and social benefits and security. Part of the IMF requirements in shredding the labor rights and protections of workers in Korea has created this new irregular category, and it is huge. Estimates from the government hold that irregular workers, unknown virtually a decade ago, now constitute almost 8,000,000 workers or almost 40% of the Korean workforce.

Elections are coming in Korea. Elections for President are scheduled for December 19th and parliamentary elections are in mid-2008. Not surprisingly in the jostling for position both parties and politicians want to say that they are doing something about this huge phenomenon. After a bitter struggle an act was passed providing some protection to irregular workers. The IMF got involved it appears. There was a stalemate, and finally the compromise ended up protecting the substance of the Act, but delaying its implementation until July 2007, rather than January 2007.

The bare bones of the Act establishes that after two years on the job an irregular worker has to be made regular, or formalized as they say in other countries, and given benefits and so forth. Business pushed back. There were frequent reports of mass firings of irregular workers right before the Act took hold as companies tried to off load potential permanent commitments to workers that they were holding on tender hooks.

Talking with representatives of various unions that are part of the KCTU (Korean Confederation of Trade Unions) as well as Korean Contingent Workers Center (KCWC) and a group from my hosts, PSAU — People’s Solidarity Against Unemployment, was fascinating on a number of levels. First, I found out quickly that the bill had so many loopholes that it was turning into a disaster for irregular workers and leading to mass sackings in many workplaces. Essentially, the bill had drawn a big, fat circle on the back of irregular workers that encouraged employers to toss them out before they had two-years on the job in order to keep from making them regular and thereby giving them full wages and benefits. What a mess!

My brothers and sisters in the meeting were very interested in the organizing drives we had done among home health care workers, home day care workers, and garbage workers. They were had a million questions about both ACORN and “Living Wage Campaigns.” They thought the idea of community organizations also caring about the work lives of their members was a breakthrough and that the Living Wage Campaigns might be very important tools in Korea.

But, I also learned that unions are not taking any of this lightly because it has hurt their density. Among formal workers KCTU has over 22% density, but among irregular workers, my friends estimated perhaps only 3% at most. KCTU has responded by getting affiliates to pass what sounded like an “assessment” that had created an organizing fund of $10,000 won per member which would mean a fund with about $5 M for this purpose. More confusing perhaps was that most of the fund seems to be spent on duplicating the old AFL-CIO Organizing Institute program of recruiting organizers, rather than pushing new organizing programs.

They did mention that they had had some good organizing success with day laborers on construction sites, so I need to find out more about that, and I will do so.

Our translator, Hyewon Chong, who was from the Korean Metal Workers’ Union, also wrote me about an interesting and unique initiative within her own union.

“In our union, for example, we actually have affirmative action for irregular workers so that irregular workers themselves can be in top leadership positions ( so a Vice President , Central Executive Committee members and Central Committee members, shopfloor reps for our union convention etc must include ) because it is crucial that unions don’t fall into just the servicing of existing members but the demands of all workers.”

They may have invited me to lecture about our experience, but it looks like I also will learn a lot here! 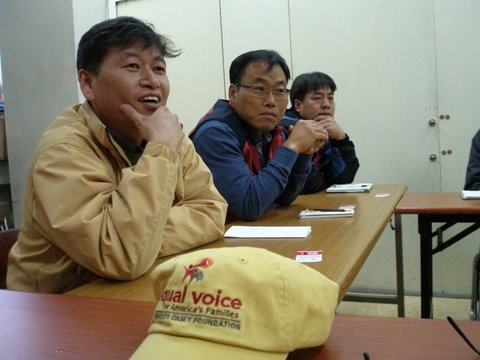 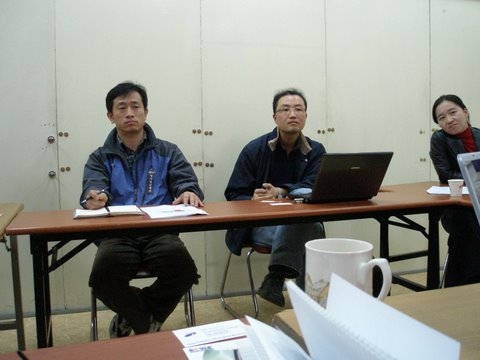