Seoul and Incheon City     We took the metro out to Incheon City, moving from the 10 million person Seoul to the 2.7 million person industrial town of Incheon. In the wake of the unemployment created by the IMF currency crises 10 years ago, there was unemployment particularly in the manufacturing sector that had been the engine of growth here.

Our friend, Mr. Yang, the chair of the Incheon Center for Unemployed-Relief Civil Movement (in English), had also recently been elected as president of the People’s Solidarity Against Unemployment (PSAU), a national network of groups around Korea, that is our host in these meetings, presentations and lectures. We had more than 30 people in attendance culminating a 2-month training program for organizers of the unemployed in the area. We were supposed to make some brief remarks and then have questions and answers, but the translation was an issue so we ended up having to read our remarks in English and then have someone else read them in Korean. I’m sure it worked out fine, but for an old, ad-libber, it was an experience realizing that no matter what I added, subtracted, or corrected, and it was still going to go out live in Korean following the manner of the translation. Gulp!

When I say we, the second presenter arrived from Paris where she had been delayed by strikes at Air France. Jessica Holc was one of 5 full-time staff for an organization called Solidarities Nouvelles face au Chomage. Puzzling through her presentation for the first hour in French and Korean, while I read her English pamphlet gave me a grasp of the organization. Essentially they were organized in 1985 following the initiative of Jean-Baptiste de Foucald to both demonstrate action in regard to unemployment through solidarity and to deal with the issue of the exclusion of the unemployed. Basically in 2006 they organized 97 solidarity groups with 1200 voluntary members that accompanied more than 2000 unemployed people in their search for jobs. In welfare rights 40 years ago we used to call these “grievance actions.” They link people to people in this case to try to achieve jobs. The organization also raised enough money from 3000+ donors to support short-time jobs for more than 70 people bridging their “comebacks” from not working. I will understand more in days to come. This seemed very intricate and personal work in dealing with the unemployed. They also were involved in a lot of advocacy and policy representation on the issues of unemployment.

Mr. Yang reported at length during the Q&A after my “reading” on his visits to Los Angeles and New York earlier in 2007. He was quite impressed and reported chapter and verse, including the number of staff in the Brooklyn office (84), the number of membership actions per week (2), and other details. He at one point asked what had happened to his request for 20 organizers to begin ACORN Korea, and when I reminded him that he and others had not been able to make a dent on the price tag for the work, we moved on to other topics. All of them were focused on enthusiasm about bringing ACORN to Korea, but there is a lot of work that would have to be done to make this reality and Korea is an expensive, developed country, so the work would have to resourced. Nonetheless, it was exciting being there with everyone in Incheon and listening to their enthusiasm, questions, and commitment to the work. 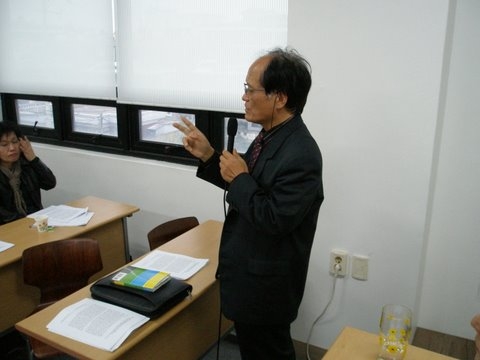 Mr. Yang
Jessica Holc from France
the organizers of the training program 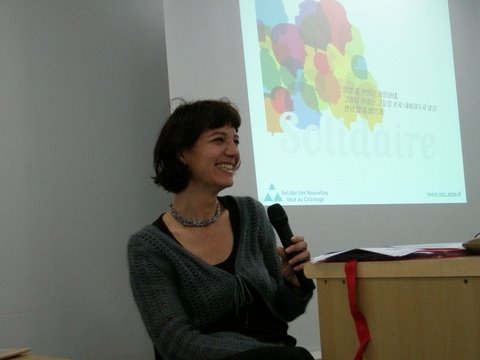 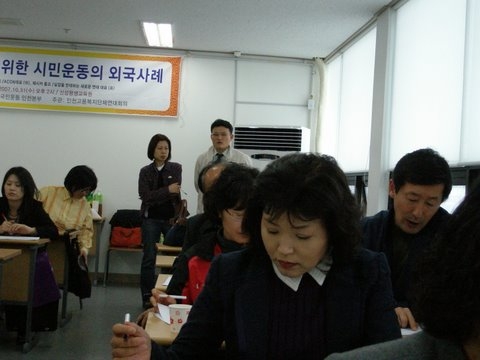