Changwon We were meeting in a large auditorium in the new Labor Department building in Changwon. The administrator noted in his closing remarks that we were essentially inaugurating the “hall” as the first big event to be held there. More that 50 people sat attentively from the opening bell before 2 PM until 6:45 PM when the applause at the secretary’s remarks closed the session finally.

Let me give you a sense of all of this in a little more detail. Usually we were told, as we were in Incheon, that we would be asked to give some informal remarks, there would be translation, and then some questions and answers. The big presentation was scheduled on Friday afternoon — all of Friday afternoon — at the international symposium looking at the 10 years of experience since the IMF triggered crises in Korea.

When I was in India last week an email came through to me in those hurly burly days of meetings indicating the schedule of sorts and asking for background and notes for a presentation. The office in New Orleans and the ever diligent Nicole forwarded my hosts in Korea a general bio and a general description of ACORN and our work from the website because they wanted to translate some pieces in preparation.

I started to get the sense that there was trouble on this score when I arrived in Seoul late Saturday night and a message asked about my “presentation.” I passed it off as simply that they might not have read whatever Nicole had sent them. The next afternoon Professor Stark gave me a buzz to arrange a meeting with the hosts early Monday. He asked again about the “presentation” and had I sent it. Na Hyodoo in arranging to meet me Sunday afternoon said that he had been asked to remind me about my “presentation.” It began to be clear that I had better take a better look at the email from Na and Nicole and see what in the world they were talking about?

Mercy! It turned out to be a list of questions about ACORN, our work, our role in organizing informal or irregular workers, our relationship with SEIU, and generally how in the world something in the community could also be involved in issues with labor — all of which was unknown in Korea. Under closer inspection it became clear that they were looking for something in writing that hit all of these points with some force, even if not with elegance, and they were decidedly and unambiguously clear that they would “not accept a power point!” What hath God wrought?!? Worse, and now I felt bad for whomever had drawn this short straw, they were insistent on needing this PDQ, because they had to have it all translated into Korean. Before Friday, I presumed. Yo! So, I started writing before visiting with Na for several hours and then told him I had to run to finish my “homework,” and without reading a line twice finished a 5,000 word paper for them at 11:55 Sunday night and emailed it to Nicole and Na to send to my hosts as soon as possible.

Good thing! 48 hours later in Incheon I was forced to read the excerpts of the paper for the first time while Ms Jeong from People’s Solidarity Against Unemployment (PSAU) was suddenly drafted to read similar paragraphs in Korean. That was an experience already recounted.

In Changwon I picked up a copy of the booklets near the registration desk to find to my surprise in this bound booklet they had a full copy of both the English and Korean version of the “presentation.” The main event may have been Friday, but it was turning out that in Incheon and Changwon, these groups of first 35 and then 55 drawn from groups, unions, universities, and elsewhere saw all of this as a very big thing indeed. We were a Broadway play working out the kinds on the road before we came into the big city of Seoul!

Thankfully in Changwon a sociologist from a neighboring college who had spent 5 years at UCLA in the mid-1980’s was able to do a superb job of translating my remarks, so I was not forced to have to read the paper! More gratifying was to hear the panel of respondents and some of the questions that were excellent and to the point: how did we do door knocking? How did we “create” an employer for irregular and informal workers? How did we collect dues? How did we exert leverage with government and companies? How did we supervise organizers directly and did we use incentives to do so? When one of the same organizers I had met with earlier from KCTU described that he and his team would have to think about some new methodologies and would try using “home visits,” it seemed like we had traction. When the leader of the Women’s Workers Association said she would have to think about what she was learning about the ACORN model and the French model in thinking about their work, it started to hit home that perhaps it was really indeed worth taking this every bit as serious as we were being forced to take all of these meetings and events, because clearly in Korea our audience was taking what we were saying very, very seriously!

I wondered whether to correct a misunderstanding in one of the translations when I answered a question about whether or not I was pessimistic about the “project” of change around the world and our collective capacity, and I had answered that in Korea we were planning to address the capacity question by trying to put together a project that would bring ten organizers from Korea to train in New Orleans and come back and see what could be done. It turned out in a slip of the tongue the comment had been translated not that way but as ten US organizers from ACORN coming to Korea for 2 months to train in Korea rather than vice-versa. It was also translated not as a possibility and a project, but as a dead certain reality!

The translators caucused and decided that it was best to leave it be. If the money did not develop it would not happen anyway, so maybe it was best to simply let sleeping dogs lie and see what would develop. Huh? Well, as I kept saying, in for a penny then in for a pound, what did I know?

We finished off the meeting, as all of these meetings are finished hurrying across the street to a local restaurant. They asked if I liked seafood. I said I did. Suddenly within minutes we were sitting in the middle of an oysters feast. A huge mound of raw oysters was piled in the middle of a platter of carrots, cucumbers, and peppers. This was quickly followed by steaming platters of fried oysters from the area. While trying to make our way through this oyster extravaganza we were served soup, and darned if it wasn’t full of oysters and clams! We had suddenly found ourselves in Changwon in oyster heaven! We were practicing a form of oyster gluttony! I probably ate what would have been $50 worth of oysters in New Orleans and did so by the dozen. Professor Stark estimated that the cost was hardly $5 USD.

Korea — what a country! 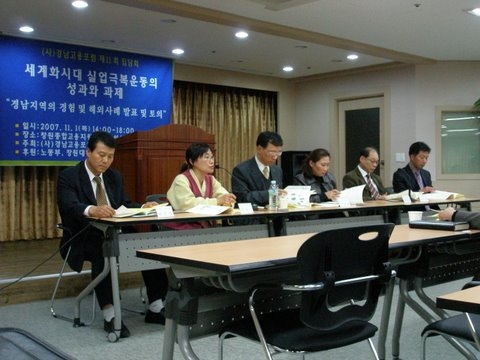 From left, labor official, Ms. Jeong (PSAU head), moderator who is professor of labor studies, local unemployed organizer, head of labor office, and professor of social welfare locally
Left: head of Women Workers Association, right: Ms. Jeong our host from PSAU on right
KCTU organizer saying that he was listening to ACORN and was going to try some of our strategies and methods including home visits 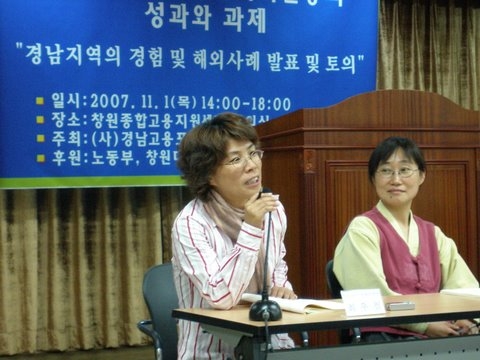 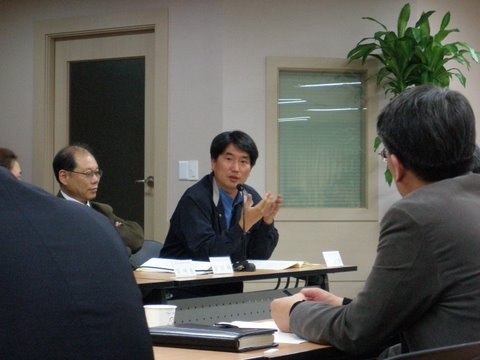