Seoul          We needed to be there shortly after noon so that we could try and meet the translators and go over the signals and iron out the rough edges before the presentations. In this look at the 10 years since the IMF crisis in Korea and the economic dislocations it forced on the country and its workers, the organizers of the symposium which included PSAU, KCTU, and the newspaper that had been a leading voice in that period had not only invited a speaker from France and the US, but also organized an opening panel where a local professor was presenting a study of different types of unemployment organizations and their effectiveness.

The organizers had found a location for the event in the basement auditorium of the St. Francis Anglican Church in the very heart of downtown Seoul. There is no city in the world that reminds me of Seoul more than New York City with their similar miles and miles of high rise buildings, so I was surprised to find the Anglican Hall directly across the wide avenue from the Press Club where I had spoken a year before to community organizers from around the country. This would be a different crowd. Many were part of unemployment organizations and a fair number of them were employed by social employment organizations of various types, similar to the sewing operation we had visited in Changwon.

And, crowed it would be! The organizers were hoping for 70 people but kept having to pull up tables and chairs into the hall as the numbers broke 100 people by the not long after 1 PM.

The first panel compared three unemployed organizations based on field work done over the last summer (caveat: it was all in Korean so what I have here is my best patchwork of some translation of the written summary and some questions). The author was trying to test them against their capacity, their level of autonomy in action and decision making, their financial stability, and their ability to form several functions. All three of the organizations were founded within a year or two of the IMF crisis. One was in Incheon, another in Changwon, and I think the last was in Seoul. The audience was attentive, but this had to be hard for some people since it was a glaring look at organizations they knew well and probably organizers known to many of them as well, perhaps even in the room. The study was academic so even criticism was hidden behind the silk screen of simple comparison.

Interestingly to me, all three of the organizations were small, ranging from hardly over 100 to not much past 200 members. Another interesting point I will share pointed out by the presenter and the responders was the fact that women were the more attentive base for these anti-unemployment enterprises. They were willing to do whatever it took to try and get back to work. Possibly the social enterprises were better at the job opportunities available in more classically female occupations? Perhaps the men felt stigmatized and felt more in denial? Regardless, women became the base.

What is to say about our presentations? The crowd was polite of course. There were questions. Remember this was the 3rd time in 3 days we had essentially given the same speech. This was not our version of the candidates well sanded, errorless stump speech though since translation continued to be difficult. In Changwon I had been particularly lucky because my translator was a sociologist trained at UCLA so he was familiar with the material and could fill in the gaps for the audience. This was more difficult at the Anglican Hall. My translator was a young woman who taught English to sales and other executives at Samsung’s campus 80 kilometers away as just the type of irregular worker (contingent worker) that we were talking about here, since she did 10 weeks stints but had to wait to be called and was paid well when she worked, but without benefits and had to wait to be called. This was new material to her, and her first stint doing interpretation.

The crowd loved problems with the translation and handled them with fantastically good humor and roaring laughter. At one point I had four tranlators trying to figure out how best to express to the audience what I was trying to say. Jessica Holc, my French associate, claims that she made a “film” on her new digital of this episode that she is going to send me and that my Korean comrades want to put on You Tube because they thought it so hilarious. I guess you would have had to have been there. Let’s just say, no matter what you hope, this is not the UN where it flows simultaneously from your mouth through a filter of the translator and seamlessly into the brains of the audience.

It is a humbling lesson in speaking and writing more precisely. Not simply because the devil is in these details, but more exactly because a miss by an inch can throw you off course by miles.

My Katie (as she called herself) Jeong asked me a question about the final paragraph of my piece before we started. I had tried to make the point that unions had historically build a community base before organizing using the Auto Workers and the Steel Workers as examples of a tendency that had been lost and now had to be regained, and was in fact being recovered by the role played by ACORN. In leading to this conclusion I had written that “it was not uncommon…” for unions to have been built that way. Katie caught the fact that “not uncommon” had been translated as “strange.” Whoops, I had inadvertently tricked by translator with a cute turn of phrase where a double negative makes the expression affirmative. Sounds great in English, but is thoughtless in preparing for translation since it so easily could have been written simply, as being “common.” As it was, the written translation must be confusing for all three of these audiences since now the point is left hanging expressing that a community base for labor organizing is somehow strange and unusual. Indeed that might be the case still today, but hardly the point I was making!

I was being taught hard lessons in the basement of the Anglican Hall in Seoul! 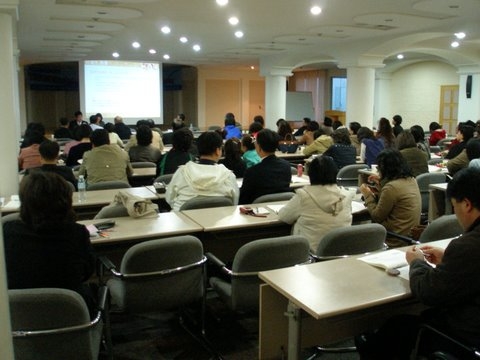 the attendees
local professor during his presentatioon 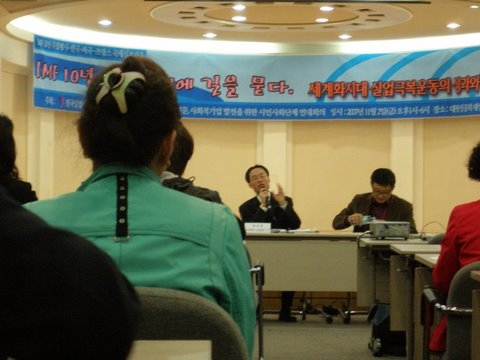