Seoul Frequently I’m an indifferent eater, and I avoid drinking especially anywhere around something as serious as work! The staff kids me for my “beers of the year.” My Korean comrade Na Hyodoo had questioned me closely about my unwillingness and restraint in this area, because it was soooo different from Korean cultural practice.

Having Jeffrey Stark, our University of Toronto anthropologist, with me for days at a time crisscrossing the miles of terrain both formal and informal in Korea, meant that I got a crash course in many parts of Koran culture. Ground zero is the fact that society is extremely hierarchical with both age and status receiving great deference. The oldest member of a group is the “older brother” and expected to be a mentor — and many times to pay! Having someone who was both a guest and a foreigner in these settings set people at edge and made them sometimes nearly suffocating in their attentiveness. I had to constantly assure people that I was fine! An example: Incheon International Airport is an hour away by bus from downtown Seoul, but the airport bus is amazingly well organized so that there is virtually no way you cannot find it — you walk out of the door, there is a small booth, and they point you to a series of markers and you stand in line for your bus which then comes almost every 15 minutes. Furthermore the YMCA has it’s own stop, so nothing can be easier on both sides of this trail. And at 9000 won (about $9 USD) this is easy work if you can get it! Believe me this is something I can handle. Nonetheless I had to constantly assure my host that this had not been a problem for me and that I totally understood that she could not schlep out and get me and accompany me in leaving….Coming from the organizing culture of the US where people hardly care if you live or die, it’s a culture shock!

After (and sometimes before each speech) we ate dinner with our hosts for the particular event. Frequently members of the class or key members of the audience joined as well in a neighboring restaurant. Korean food is quickly prepared and seems very healthy (at least to me — very little white death: sugar, flour, or salt! — no bread for example at any meal!) with a huge variety of small dishes usually. At the end of the Anglican IMF meeting we immediately dispatched ourselves to dinner not far away with maybe close to 20 people. Since this was going to be a final celebration, I knew we were in for something. All week they had been talking about the main dish we were going to eat, which involves cooking an entire chicken in a bowl with ginseng, and is thought to be especially healthy.

The drinking lubricates the hierarchy, and it is critical to the culture to the extent that in the resume’s of the candidates for President (election is in mid-December) it covers their capacity to handle their liquor according to Jeffrey. The main drink everywhere is something called Soju or Sojo. What keeps all Koreans from being alkies, given how ubiquitous it is in the culture, is the elaborate nature of the rules here, and the fact that all of it is handled in small, shot glasses thankfully for a non-drinker like myself! No one is allowed to pour their own drink for example, which cuts down some of the intake! I couldn’t tell but I think you are supposed to toast your neighbors at the table virtually every time you drink. Maybe this was not a requirement, but a common custom, that also cut down on the intake as well. You have to click the glasses in some order as well. Someone younger or junior has to click their glass beneath the lip of the older or more senior person. When first pouring you have to hold your arm as you extend it, but after you do that once, you can pour in a more regular manner. If someone if too far away for you to be able to pour their drink, you can tap the table at the time as a poor substitute. Many of the native Koreans were surprised to learn that from Jeffrey! I could go on, but once again, you would have had to have been there, I guess….

With the chicken in every pot (Huey Long meant nothing to the crowd, though I certainly shared the slogan!) the collective knocked off a half-dozen bottles of Soju as well as about the same number of bottles of something they called “100 year wine.” This was a yellowish bottle of sweet wine (Soju is a poor cousin to vodka perhaps fermented from potatoes — once again credit Jeffrey Stark for this insight!) and you guessed it, if you drink it you have a chance at living to 100. The initial shots were handed out to everyone at the table that was over 40 or so, and certainly to Mr. Yang (my slight senior) and myself!. The crowd exchanged pleasantries in the street and wished each other the best repeatedly and broke in half. In a round about way we made it back to the main street, and I could see the Samsung building a kilometer or up the way so I thought perhaps we were being group-marched back to the Y and there was a chance at an early night.

Wrong! Our crowd now perhaps 10-12 of the hardcore organizers, as well as my friends, Na, who had joined us for dinner, Fides Bagasso from the Philippines and Ok from the LOCOA staff I had also invited (with elaborate permission, believe me!). We turned into a narrow alley parallel to the main street that was well known for good, cheap and popular “regular” food that people clearly preferred. We went into a place with the classic Korean low tables where you scrunched up underneath and took off your shoes of course. There was something involving pouring a shot of Soju and then dumping it into a mug of beer, boilermaker style, that I just thought it wise to avoid. A bottle of French wine was produced that made the affair seem more elegant to our hosts. More food was ordered! More drinking. More talking.

The end of this event was a presentation of gifts. I got a Korean headband from one of their fights. Anyone who has ever seen a Korean (or Japanese) demonstration on CNN or BBC has seen the “ties” around the foreheads of the protesters. A walking picket sign of sorts that all of the participants wear on their foreheads with great color and style. I got a “struggle vest” that delighted me! I had seen these throughout the country as we met with unions and other organizations. Sometimes they had slogans on them. Sometime they were more like vests and other times like polartecs. Going into “struggle” a participant pins on ribbons and buttons for the particular action. These are great! They also gave me one of their demonstration vests for free education (Koreans pay something for all of their schools…which I don’t really understand?). These were real treats! I was honored. My hosts were holding my French sister’s gifts until Saturday to give her after her last meeting….smart!

When we finally left his great hole-in-the-wall place almost everyone walked us to the YMCA. It became clear in front of the Y that this was not really over. I could certainly call it a night, but they were clearly still going someplace else for yet more celebration! I said I would join them for a minute….they insisted in this super safe culture that I run up and store my gifts in my room along with my paperwork, which I then did.

Less than a block away the crowd almost at full strength still dove into a basement “bar” operation. Out came the beer now and fried squid rings (which were great! — the mass volumes of food perhaps keep people on their feet as well!). More conversation. More fun. More business.

I left them with several of the folks who had to catch last buses to Busan or Incheon or wherever. Some of them, including my French sister, hung in there for god knows how long. (Glad she represented!)

This was an interesting experience. A marathon of sorts really. We got to the Anglican church at 12:30 pm. The program began about 1:15 pm. We spoke a little after 3pm and after questions the event ended a little after 5:30 pm. By the time we broke down the hall and got to the first dinner location it was a little after 6 PM. I looked at the clock as I waited for the elevator at 11:45 PM and thought of what I had to do to leave on Saturday morning for the USA.

I am in awe and admiration of the organizers and the work in Korea. They are both very serious and committed to a level of comradeship and mutuality that is rare anywhere in the world. I am curious about the down-sides to some of this, but it was an amazing experience, and makes it easier to continue to commit to sharing our work in this country and training organizers to take the next steps in building something here.

I hope I repay all of this hospitality in sweat equity. Too late for me to become a drinker and party guy, so I will have to work harder to meet them half-way and contribute in ways I can handle more comfortably. 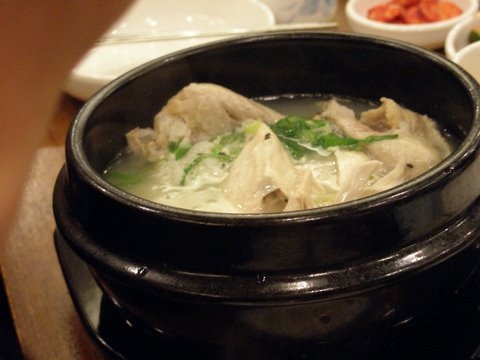 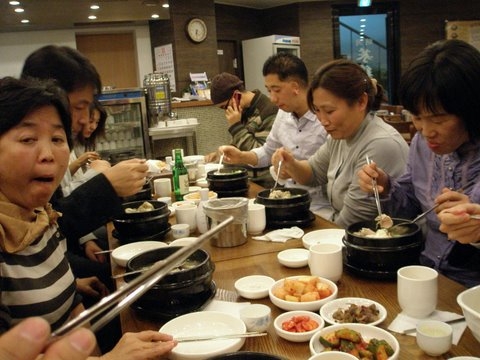 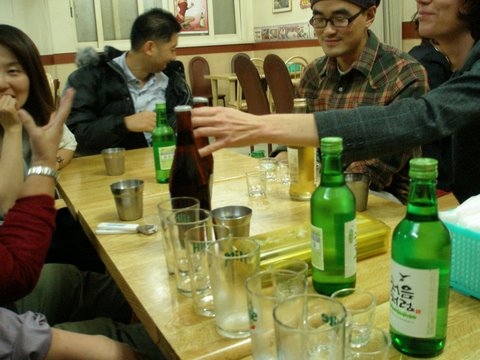 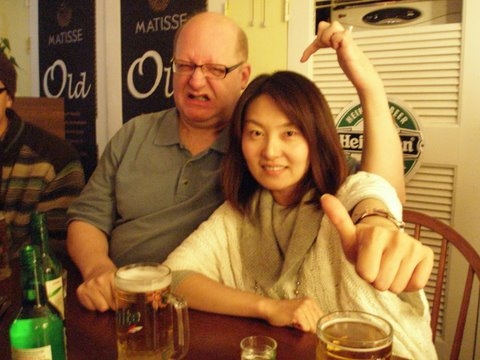