New Orleans     All last week we endured the media frenzy of Henry Paulson, current of the Treasury Department and formerly of Wall Street, and President Bush, currently in charge of Iraq, but presumably now looking for a job running the Stock Exchange, trying to claim that they were jawboning the industry to provide “relief” for homeowners facing foreclosures. The announcement and review of the terms indicate that this was a lot of talk about a very little bit of relief.

There are some obvious problems.

Everything is voluntary for the industry. We are still at square one on forging a consensus then.

The relief is available to precious few unfortunately. There have already been 850,000 foreclosures. The recent home ownership gains for minorities for example have already been wiped out. The estimates of how many might be helped by the Paulson-Bush plan vary. The low estimate is about 175,000 borrowers and the high hardly breaks 300,000 in the most optimistic projection. With an estimated 3,000,000 more homeowners facing the threat of foreclosures over the next 18 months, we clearly do not get there on this plan!

Talking to one representative of a big operation in this sector, he described the 95% DTI advice as probably qualifying most such borrowers for refinancing rather than relief because the numbers were so high. He and his partners then laughed uncontrollably. This was a joke to them.

This is a continuing tragedy for everyone who is facing the threat of foreclosure. Talking to ACORN’s leaders on a call about foreclosures last night, it was clear how much people get the fact that this is a crisis, there is no time to wait, action is necessary and must be decisive, the bar has to be continually raised, and our campaign must continue. It was also clear that where our leaders are in areas that are hard hit they are in a lot more hurry than elsewhere to see real movement and change.

Perhaps Paulson and Bush needed this kind of reality check as well? 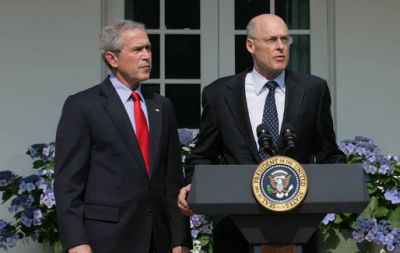