New Orleans     A report was issued by something called the Mercatus Center, which is based in Virginia on the campus of George Mason University. This outfit is doing a 5-year study of post-Katrina recovery efforts with a team of professors and researchers they have assembled. I suspect this is a study that starts with a pretty conservative bias in its work, but, hey, any port in the storm!

Their front page conclusion to date is to argue that the strength of community organizations and community leaders is the most critically determinative factor in recovery compared to virtually all others, including government. They have determined that the key tipping point on decisions to comeback and rebuild are the strength of community ties established through such organizations, rather than the size of the rebuilding financial grant. As much as we would like to agree on the first, it does strain the imagination to believe that money is not an equivalent factor, so we will have to see if Mercatus can actually back up this finding.

Report participants, including Steven Horwitz of St. Lawrence University, argued that FEMA needs to incorporate more participation from community organizations as well as the private sector. He argues that FEMA should “consider giving money directly to community organizations so that people with knowledge of local needs can make the key decisions regarding evacuation and rescue efforts.” Agreed! Of course Horwitz then also suggests that Home Depot, Loew’s, and Wal-Mart be put on the committees as well, and compared to a lot of what passes for local input maybe they would be better than the gang on these committees now, but who knows what happens once the foxes are in the chicken pen full-time.

This outfit may not have the clearest voice, but at least they are saying the right things about some of this, and this is a dialogue that needs to happen. 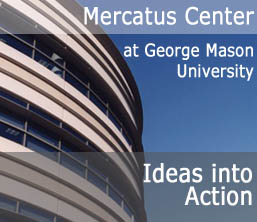