New Orleans     The dispute between the California Nurses Association, AFL-CIO, and the Service Employees International Union has bitter roots in California and unfortunately is spreading elsewhere in the country. Rose Ann DeMoro, the CNA chief has been an purist on many issues and with a broad brush has tried to paint SEIU as evil, undemocratic, top-down, and whatever else comes to her mind in order to advance the CNA interests to build a single craft union of nurses. She has close to 100,000 of them and given the dues that nurses pay, she has some money in the bank for what had been her self-declared war.
The stakes have gotten higher and CNA’s behavior more outlandish when 50 of their organizers were parachuted into Ohio more than a month ago to disrupt an SEIU election for 7000 hospital workers that had been years of struggle in the making. More recently CNA has inexcusably begun decertification efforts on SEIU nurse bargaining units in Las Vegas and California. Activities of this nature are so irresponsible, anti-worker, and rouge that CNA and its leadership must be condemned! Perhaps as sorrowfully in these times of trial for workers and their unions, this mess has been widely (if not gleefully!) reported in the Times, Journal, and virtually every other media source in the country at the worst possible time for everyone.
But having said that first let me also say that unfortunately this is a “teachable moment” about how tactics and anger can erode support in any campaign no matter how just. Reports are now everywhere that for some reason buses of SEIU members and staff from Ohio showed up at the Labor Notes Conference this last weekend in Detroit. And, then things got out of hand.
The best report I have seen thus far comes from David Moberg the seasoned labor reporter connected to In These Times. He sets the scene:
Saturday night fundraising banquet was about to start, a crowd of purple-clad SEIU staff and members gathered outside the Hyatt Regency in Dearborn. SEIU claimed there were
around 800. Other observers estimated as few as 150 to 200. But someone from inside the hotel let them through the locked doors,
and they rushed past hotel security to try to enter the banquet hall. CNA Executive Director Rose Ann DeMoro had been scheduled
to speak, but she had cancelled earlier in the day.

Bill Fletcher, who often can be counted on to throw gas on a fire, gilds the lily a bit, but seems to capture the essence of the problem in the following:

Bill Fletcher, former assistant to the president of SEIU, witnessed part of the standoff. “Nothing I saw leads me to
believe the intent [of the SEIU people] was to harm, but the intent was clearly to disrupt the gathering by almost any means necessary,” he says. “This was not just a protest.” He was
troubled to find that some protesters seemed to have no idea why they were involved in the action. And he argues that SEIU-which
other unions criticize for raiding their members, just as several health care unions criticize CNA for its raids on nurses-lost much of the support it may have had.

“I’m against raids, and I was kind of uneasy about what CNA was doing in Ohio,” says Fletcher, who also was assistant to AFL-CIO
President John Sweeney. “But whatever sympathy SEIU had was gone, evaporated like dew in the morning, and replaced by a disgust that this would have happened.”

Ouch! But, Fletcher has a point and in every campaign if as organizers we lose focus on either the target or the need to leverage the public and others to the moral strength of our position, we lose.

The first thing that was lost in Detroit was the pressure that John Sweeney was on to get CNA to do right. The incident allowed Sweeney to slip the noose.

SEIU leaders defended and celebrated the action as a labor victory, initially calling it peaceful. Sweeney himself weighed
in Tuesday with a harsh rebuke to the union he formerly led. “There is no justification-none-for the violent attack orchestrated by SEIU at the Labor Notes conference in Detroit,”
Sweeney’s press statement read.

Sweeney, who said that he had been trying to bring the two unions together to resolve the dispute, also decried SEIU’s call
for its local unions to withhold their solidarity charter dues that permit them to participate in central labor councils
despite having left the AFL-CIO.

My brothers and sisters at SEIU got lost in the moment as the following weak shot at spinning indicates.

SEIU in turn described the event as a “scuffle [that] occurred between protestors trying to enter [the banquet hall] and
conference organizers trying to keep them out.” SEIU claims that “protestors were being pushed, shoved, and even assaulted by
conference participants.”

Come on! These are union members going up against union members. Macho to macho! This was not going to be a tea party, and any organizer on those SEIU busses had to know that if they lost control of this “protest” or let the anger lead the action, then it was going to be a donnybrook. SEIU could have made this work, but it would have taken discipline, and it still was risky. They could have had a vigil outside the conference in “mourning” for the labor movement.

They could have rallied people about the outlandish tactics of DeMoro, instead of somehow managing to make her look good for the first time. And that’s not easy…look at these quotes Moberg captured indicate along with his depressing conclusion.

“Is raiding that bad?” asks DeMoro. “I don’t know. Should workers be able to get out? Basically, yes, if workers want out
of a union, they should be able to.” What about SEIU attempting to raid CNA? “They’re welcome to do so.”

CNA, which organizes only registered nurses into a craft or professional union, emphasizes combative member involvement in representing both nurses and patient rights. SEIU promotes an industrial union covering all health care workers, and it saw the Ohio agreement as a possible first step to large-scale organizing in Catholic hospitals nationwide. But some of its agreements with employers have sharply limited workers’ power and emphasized the union’s cooperation with management.

“This is so completely inevitable, absolutely predictable,” DeMoro says. “I saw Ohio as a template for where [SEIU was] going with organizing overall. They’ve given up on worker
involvement in unions. [SEIU President] Andy [Stern] started thinking workers shouldn’t be involved in contracts or representation. Ohio is the next step. Now you don’t even have
workers involved in selecting the union.”

The danger of the health care union war is that nurses may be turned off to joining any union, while energy and resources that
could be spent against management or for national health insurance will instead be directed toward combat with other
unions. But a resolution to the conflict doesn’t look to be coming soon.

We learned some lessons a couple of years ago about such tactics when we were surprised in Virginia Beach on an action at Liberty Tax Services when a scuffle broke out at the door of the company as ACORN tried to move into the building all of which was captured by television and obliterated the justice of our cause into making us look like hooligans. We ended up settling the campaign but it took years and lots of resources because we didn’t think the action through well enough and got mouse trapped and lost in mayhem.
SEIU organizers will all learn this as well no matter what best face we try to put on this Detroit disaster, but this drama will haunt us for years as we try to reposition ourselves again as the bright, shining lights of the labor movement rather than the new face of hooliganism just as the bosses and their consultants and lawyers have claimed we always were anyway.
This is a tactical tragedy. 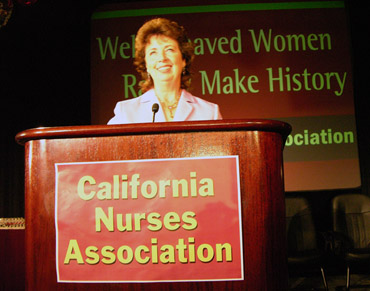