Frankfurt      Leaving India and reflecting on my most recent days in Mumbai, I was struck by some of the small, but poignant things that I found in some ways quietly moving, because they spoke to the “universals” of organizing and the work. I was struck by simple things.

Watching Cheryl Deutsch and Bilip Modha, the organizers behind the Hawkers meeting making sure they got the banner, helping put up the chairs at the end of the meeting, and earlier passing out more membership cards for the committee, I realize that I have been a part of a thousand times that are deeply embedded in the habits of our trade.

Sitting in the meeting of our Mumbai Joint Action Committee to make a plan for actions against the opening of Metro (the giant German retailers) cash and carry operation next week in Mumbai, and listening to the discipline of committing to the numbers: first, CITU guaranteed 50, the Navi hawkers committed to 25, and then the Navi chemists were in for 15, and others would have to check their numbers against these disciplined benchmarks. We were meeting on the 3rd floor of the building of the CPI (Community Party of India) which opens up its space to a wide variety of groups to provide capacity to the progressive forces of all stripes. The building and its use speak to having infrastructure, though nothing did that more than seeing the three giant, and much envied, offset presses on the first floor as we left later as they printed the CPI newspaper. The CITU offer to provide the leaflets for the May 8th action was made on the strength of their ability to walk across the hall and with a simple sentence get those presses to spit out the couple of thousand leaflets we would need.

The meeting space itself was a form of capacity. We had walked into a meeting of 20 or so people finishing up some plans for an Indian expression of solidarity for Palestinians. Mumbai’s “pedigreed left” (in Vinod’s branding) in Mumbai was there: Mahatma Gandhi’s grandson (who made the best case for the banner’s slogan — Homeless after 60 Years), the head of the Mumbai office of Focus of the Global South (organizer of the World Social Forum in Mumbai), and Comrade Reddy (General Secretary of the CPI and representing the youth wave since he was only in his mid-50’s).

There were pools of light in the large 3rd floor as our meeting broke up near 8PM. A small meeting was still going on in a side room behind the glass windows with Comrade Reddy. There were people working on the data base in a windowed computer area. Vinod and I tried to find the switch to turn off the section of fans and lights that had surrounded our meeting, but finally gave up and walked down the stairs to find the organizers, have a last meeting with them, and get me back in time for a 4 AM departure for the airport.

This same routine in different form and fashion was duplicated by hundreds of ACORN organizers in different time zones all over the world. I found the peace that ends with another meeting, another plan made, and another step taken simply in a different time zone, accent, and country a contribution of our own to a universality of struggle and search for social justice that runs deeper than the globalism that surrounds us so profoundly.

It seemed to me that it was time to go home now having walked with solid steps on grounds we all knew and shared so well. 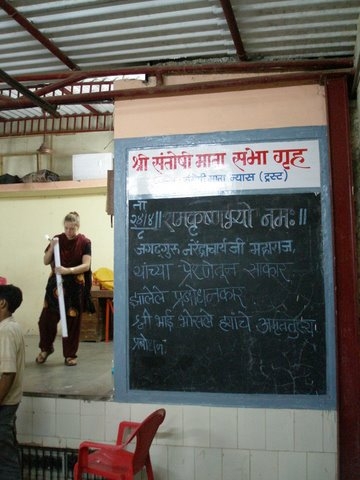 finishing the hawkers meeting…Cheryl picks up the banner, puts the chairs up 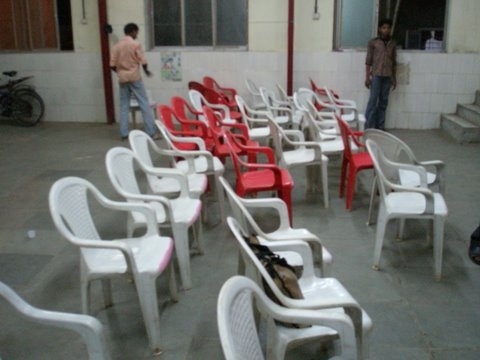 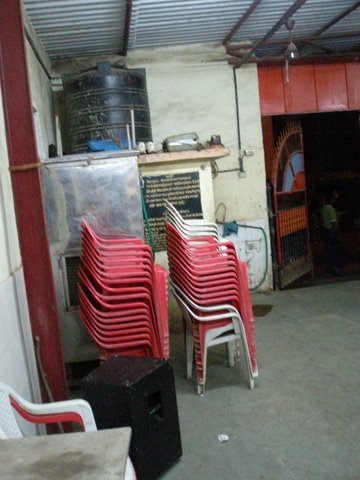