Detroit        Weather alternated between perfect and coolish.  A surprisingly hard shower turned into hail for almost a half-hour.  Red shirts were everywhere and largely good spirits abounded.  Friends greeted each other who had not seen each other since the last convention in Columbus.

Arquela Smith was there from Dallas with her great grandson.  She was 90 now, but it was time for another ACORN convention, so she was there again!

For years several sisters came from Philadelphia.  I miss not seeing them now.

Dan Russell, my old friend from Springfield College rode in with the Springfield ACORN crew.  It was good to have folks from Springfield in the house.  He introduced me to three generations named Ruth…mother, daughter, and granddaughter.  Both of our mothers had Ruth in their names.

On the first day, Maude Hurd, ACORN’s great president opened her last convention as presiding officer and in her keynote speech sounded the call for both ACORN’s commitment to building the dreams for our members and to regime change in the coming election.  The fight here was centered around ACORN’s struggle to stop foreclosures and Maude brought the point home hard in Detroit which is ground zero in the mortgage collapse.

Congresswoman Maxine Waters from Los Angeles returned to the convention revved up and ready to fight.  As always she and Maude reminisced about CRA testimony several years ago before her committee that found Maude, ex-President Elena Hanggi, and several other leaders pulled out of the committee room and into jail.  She was followed by the great Congressman John Conyers from Detroit, who though he is markedly subdued now compared to his fiery speeches of twenty years, still hit the notes that needed to be underlined.  Perhaps he was surprised that his call to the Convention for Hillary Clinton to be vice-president was greeted so indifferently?

The main speaker though was Reverend Jim Wallis, the head of Sojourners, a bestselling author and long time social activist.  He was at home with ACORN.  He would start the Bible verses and rows of ACORN members would finish them.  He walked the members down memory lane to the Civil Rights days and his times there and then over to South Africa with Archbishop Desmond Tutu.  His real message was his effort to build common cause with ACORN in the fight against poverty.

ACORN heard that message loud and clear and responded at the top of their lungs.  It was convention time again! 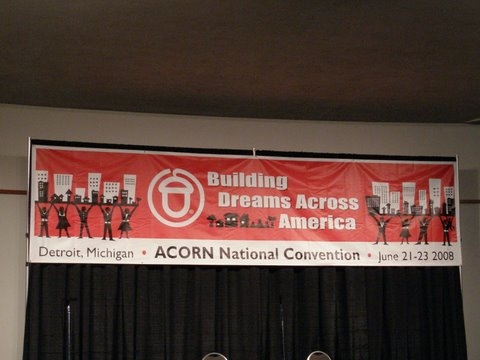 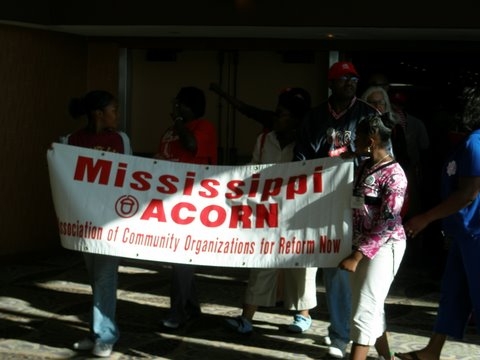 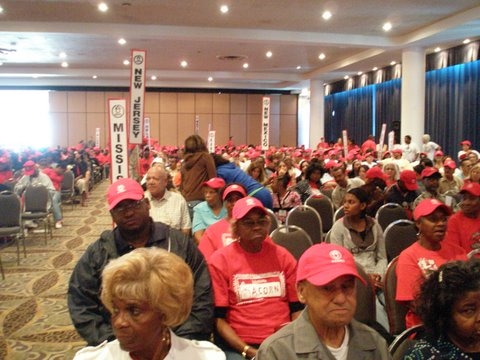 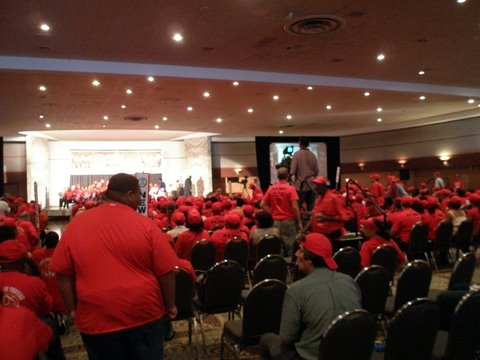