Detroit        In his speech before the find day of the ACORN Convention, former Senator John Edwards laid the gauntlet down on the “Half in 10” campaign to cut poverty in half in ten years working with ACORN and other grounds.

"This is not going to be easy," he told a crowd of nearly 2,000 people attending the national ACORN convention at Cobo Center. "But we’re ready because this election is about taking down walls so that we can finally see that one America."

"There are practical steps that all of us can take to cut the poverty rate in half and end poverty in America in 30 years," he said, noting that electing Obama would be a good first step.

Other steps would be to provide loans to Americans facing foreclosures; end the war in Iraq and redirect that money into the fight on poverty, and offer affordable health care to all Americans.

The ACORN International becaks (Indonesian bicycle rickshaws) were a bit hit with the members as well and became a new way of helping who needed a lift on the route.

The message was delivered, so let’s hope it was heard. 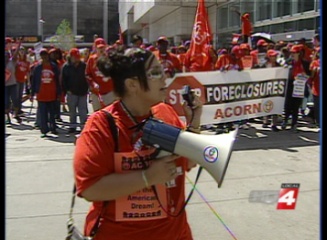