Mumbai           The Dharavi neighborhood is famous in Bombay at least as famous as a mega-slum can be with almost a million people living in a slum almost in the center of the city on what remains of all wetlands from the rancid remains of a river running to the Indian Ocean through the last, protected stands of mangroves in Mumbai.  Give the size of the slum and its location, there is almost no need to tell experienced organizers that there is a world of development pressure on the Bombay Municipal Corporation (BMC) from a host of developers to allow them to raze what is there now and put in upscale housing and malls within a hair of this huge city’s heart.
Vinod Shetty, ACORN India’s director, and I accompanied by a young guide who lives in Dharavi spent hours walking through the narrow alleys and catacombs of the slum for two simple reasons.  We met at the Mehim train station, walked on the bridge over the railway tracks, and found Dharavi all around us.
First we wanted to get a handle on where the workers we were organizing were living to we could understand the community organizing opportunities and challenges, and, secondly, we need to understand the end sourcing of the recycling industry for our ragpickers.  Perhaps surprising to outsiders is the fact that the teeming slum is a mask for a symbiotic set of small — and large — industries that produce the end products from recycling, tanning, and other smaller operations everywhere in Dharavi.  Another way of looking at Dharavi is that it is an industrial zone surrounded and concealed by substandard housing, rather than a the typical conception of a slum that simply provides inadequate housing for workers close to low skill or service jobs in the city core.
Technically, we were taking a look at the industry on a Dewali holiday.  There were no newspapers printed today.  Many elsewhere were off of work.  Needless to say we found the recycling industry bustling, making it hard to even imagine what it would be like at full capacity.  We would come around the corner of some narrow alley way and find a hearth at full temperature to heat down the plastics that had come on the backs of ragpickers.  We climbed to the roofs to see areas on top of the low buildings that were used for drying, then bagging.  Under the roofs were, stacked to the ceilings were the mini-warehouses waiting for the orders.  Repeat this process and name the items and it was here in Dharavi for processing:  cleaning, sorting, heating, processing, drying, bagging, and away.  We saw the process for paint cans, plastic jerry cans, cell phone batteries, plastic bottles, and, even rags.  It was really quite amazing to see the level of machinery constantly surprising us behind an open walkway or around the one corner or another.

Besides the major recycling process — the Dharavi operator association has 1200 members if that gives a sense of scale here — we walked through other parts of Dharavi where we hides being tanned from the skinning to the cutting to the lacquering and painting; we saw one section where dozens of kilns stood that made earthen pots of all sizes; we saw rooms full of sewing machines stitching wallets; we saw a eggs being jobbed out for sale everywhere; and, we felt if we had stayed longer, there was no limit to what else we might have uncovered behind the open doors of Dharavi.  We even walked upon a sizeable Dharavi factory maintained and run for decades by the American company, Johnson & Johnson, which utilizes goat innards to manufacture sutures.  We saw the goats, too!
Trucks of all sizes line every roadway bringing product in and out of the slum.  If this is a secret, it is certainly an open one.  It also goes without saying that the smells, fumes, and byproducts of these industrial operations are dangerous and are providing both life and death to many of the workers simultaneously.  Dharavi is a no shoes, no gloves, no masks, no nothing work zone.
All of the development plans are caught on the argument of whether to build apartments in high rises for the slum dwellers of Dharavi in the size of 300 square meters, which the developers want, or 400 square meters, as many residents and political parties have demanded.  There seems no plan for the informal work spaces that residents need to earn their living under either of those size limitations, and it goes without saying there is no plan to relocate these thousands of smaller manufacturing and processing facilities and the tens of thousands of jobs that they provide to reassemble them in the bowels of shopping malls and high rise luxury housing.
This is a battle royale shaping up for the future of many in Mumbai.  It almost seemed breathtaking for ACORN India and ACORN International to be able to be a part of this great struggle. 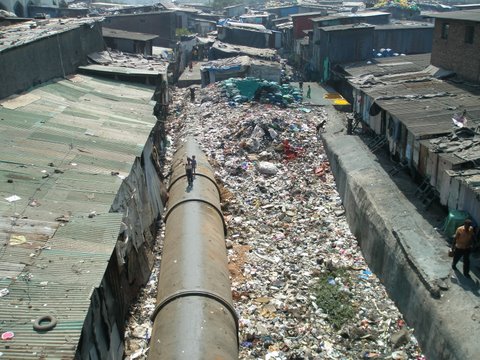