Picking at the Landfill
Mumbai           Perhaps predictably, there is a hierarchy in rag picking, like so many other professions.  The simple rule is easy to follow:  the closer you are to the source of the garbage, the better your yield, and therefore your income.  Like so many businesses, you do better, if you have the first crack.  A waste picker at the beginning of the chain can sort and process the most valuable parts of the garbage from homes or other establishments.  The end of the chain though is at the final dumping when the trucks raise their loads and let them fall in a sagging heap at the landfill.  Rag picking and sorting in the landfill is more like scavenging than anything else, so it represents the end of the line in this work employing more than 100,000 laborers, including countless children, in Bombay.  This being Indian, you also live as close as you can to your endless work, which means of course that an active slum rises within feet of the constantly smoldering landfill.
We drove all the way north from Juhu Beach where I was staying.  There had been three landfills in giant Mumbai, but now two had been closed, leaving only this last huge dump past Navi Mumbai in the northern outskirts of the city.  Even on this clear, but humid day, we drove into past shops on the entry road to the dump from the flat countryside to mountains of garbage.  In the older areas of the dump the smoke rose through greened mounds as the methane ignited below the surface even as grass had become to grow at the top of the heap here where no new garbage was being dumped.  Occasionally, we could see flames leaping ten feet high out of the mounds where there had only been a wisp of smoke a minute before, but we seemed to notice alone.  Cows and buffalo wandered between the smoke and the garbage enjoying the rare treat of fresh grass.
Farther the trucks came at what seemed to intervals hardly one minute apart, and dumped their loads almost into the waiting hands of ragpickers.  A kind of tractor would pull into the piles and try to level the mess for the next load.  Some of the pickers can remember when the landfill opened, and it had been dug below ground level in the beginning, but that was a while ago.
I would be surprised to look at the top of a mound of garbage one minute, and the next see a man or woman come through the smoke and garbage with a tarp on their head filled with whatever they had found, as they made their way towards the edge of the street.  Once there, children would sort out pieces of this and that whether rags or plastic or whatever had value, and lay it out to dry so it could be bundled on other trucks and taken for sale to recyclers as we had seen in Dharavi who prepared the next product.
As I walked and took pictures, smaller, barefoot children would often run to try and jump into the frame.  Even smaller children, half dressed or less, would often be toddling after them or held precariously on the hip of a child hardly older.  Parents were somewhere in the mounds, making a living so the family could survive.  For each load we were told they were lucky to get 10 or 15 rupees (roughly 50 rupees to a US dollar now, so let’s call it 20 cents or a quarter).  Most of the workers were newer migrants from Bihari or Uttar Pradesh, poorer states to the north, but many were also Bangladeshi and in that sense undocumented workers and families making do on the margins.
A municipal policeman would drive by on a motorcycle from time to time, but we were as invisible as anyone else.  That was simply his job.  Despite the smoke and the constant flies from place to place, it was surprising that the there was almost no smell.  This was dead garbage already resting in fire and decay.
I was overwhelmed by a million different thoughts, trying to wrap my head around the organizing problems this prevented at every level for the workers, for the families living in the shadow of the dump, and even for the city itself.  A population center the size of Mumbai, despite the amazing way these workers process virtually everything of value even to feeding the goats everywhere with what is still organic, produces an immense level of garbage still.
Where will it all go?  Supposedly this last site has already been bought by the giant Indian conglomerate, Reliance.  The rumor is that they will put a BPO (business processing operation) here outsourcing jobs from the West.  One staggers to think about the health impacts of building a high rise on this methane mass for the workers who will wear their ties and carry their lunches inside a new building with a smile at having a job there.
The ragpickers here scavenging for daily bread were constantly in motion.  This was just the way of their world.  The kids would come up and ask my name and then try it out in the English they knew.  Climbing into the cab of the truck to roll to our next meeting, I could hear “Wade”…this, and “Wade”…that behind me.
We had hard work ahead of us. 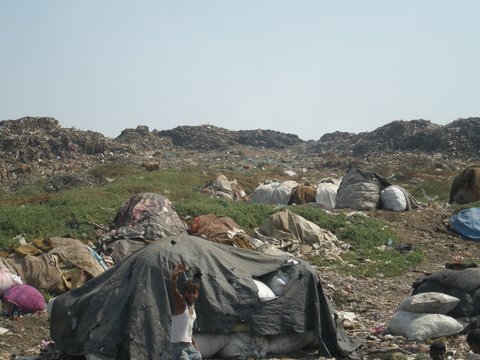 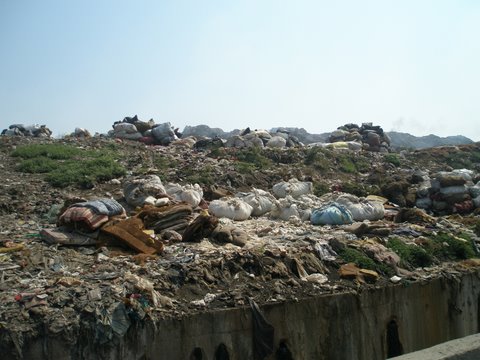 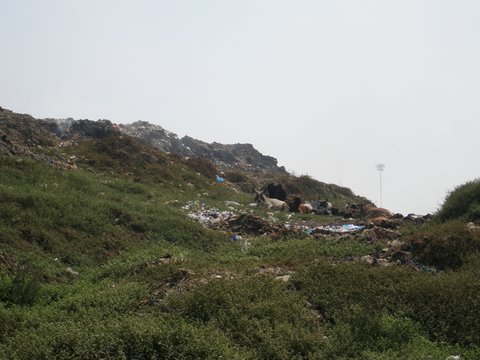