Bhuapur Ragpickers Committee
November 2, 2008
Delhi                In the afternoon we broke up our staff meeting to drive to far eastern section of Delhi.  In fact we were going a little past the boundary of the Municipal Corporation to the area of the landfill and the smaller (million plus) city of xxxxxx at Delhi fringe in the state of Uttar Pradesh.  There in our Bhuapur Committee had organized a meeting to hear what the plans were for the ragpickers’ union.
Getting out of the car at the street, we started walking into what seemed like the recycling and sorting area for all forms of refuse.  Looking more closely, I realized that was true but that other blue tarps standing between the tightly backed work areas and bales of plastic or scraps or rags were actually housing for these families of ragpickers.  This was a community at work, rather than a work site.  The high rises on the horizons all around Bhuapur were the source of all of this garbage, and this community of 5000 ragpickers was picking it up door-to-door from the residents and block by block from the street, picking some at what the road “tips” or curbs as we know them, letting some go to the nearby landfill, and bringing the rest here for sorting.  Work was life, and their lives were work.
A series of plastic tarps had been laid out to create a small clearing in the middle of the community and more than 200 of the ragpickers were squatting in an attentive and orderly fashion waiting for our arrival.  There was a leafless, scrub of a tree, but no shade.  Flies swarmed everywhere continuously, but no one seemed to notice.  I almost felt self-conscious when I would shoo one away from time to time.  Children would crawl into the meeting sometimes.  We broke briefly once so that they could yell at a couple of cows and steer them away from the meeting.
The speeches were brief and to the point from Shashi, Vinod, and Dharmendra as they caught people up to date and spoke plainly to the issues people felt.  As often as not, they were talking about community issues, rather than simply work issues.  There was no way to separate our labor organization from our community organization here in Bhuapur.  I spoke briefly of ACORN International’s commitment to them and our hopes at helping them organize for a living wage with decent livelihood and living conditions.
The workers had formed a committee with the organizers’ assistance at a planning meeting of 30 of them several weeks before.  The committee seemed solid and sat up front proudly with all of us.  There was a small building next to the clearing which they had designated as the center for the organization with banners for ACORN International everywhere.   The building stood out solidly next to the lean-tos and tarps everywhere.
The committee pressed the organizers after the meeting ended on two points.   First, they wanted any help that could be organized to get a teacher to come for the children.  Now there was nothing.  These children were simply younger workers.  Secondly, they wanted to continue to pursue the aggressive fight to prevent private companies from contracting to take over garbage collection and distribution.  They wanted to fight to protect their right to work and their right to access and process the garbage.  Ragpicking was their life and this was central.
Driving away we passed over to the landfill towering over the area.  In the late afternoon there were few trucks and fewer workers, but some continued to move among the dogs and garbage to try to find enough to make a couple of more rupees on the day. 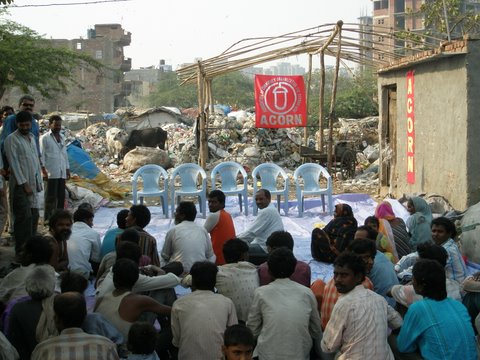 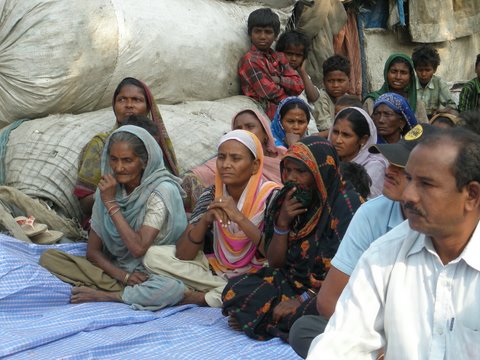 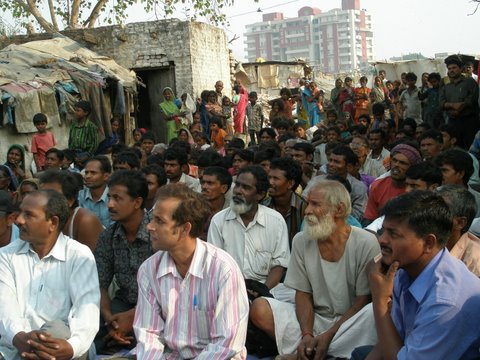