Attacking Alexi
November 22, 2008
New Orleans                      One of the most interesting and exciting people that our delegation with the Organizers’ Forum met when we traveled to Russia in 2007 was a rank-and-file union steward at the Ford plant in St. Petersburg named Alexei Etmanov, who after leading a wildcat strike had become a tireless organizer in area manufacturing plants.  Denis Petrov, my colleague and friend, working at Citizens Consulting, Inc. in New Orleans along with his wife, as Russian immigrants, had been invaluable in helping us make many of the connections given our language challenges.  He forwarded over an item to us recently because he thought he had recognized the name of one of the people we had visited in current news articles.
The reports were discouraging, because in a frightening way they indicated that Alexei seemed to be under attack now for his organizing.  I have pasted in the two articles.  Especially read the “editor’s note” at the end of the piece from Infoshop.  It is clear that our friend, Alexei, has become shockingly proficient with a rubber bullet firing pistol, but that knowledge is disturbing to me since it only indicates that future attackers will be both better prepared and unfortunately, better armed.
Union chief at strike-hit St. Petersburg Ford plant attacked
Russian News Agency — Novosti
ST.PETERSBURG, November 14 (RIA Novosti) – The trade union chief at a Ford factory near St. Petersburg said on Friday he was attacked for the second time this month by a group of unidentified men.
Alexei Etmanov said the latest attack on him occurred early on Friday as he was returning home after a night shift. "I was going upstairs, when suddenly the light switched on and I saw a shadow."
Etmanov said he used a pistol firing rubber bullets against the attacker, who was later apprehended by trade union members and police. "Most likely, it was one of the three men who attacked me on November 7," he said.
Earlier this month, Etmanov was beaten by a group of men but managed to escape by firing rubber bullets at them. Etmanov said that after the incident he received a telephone call ordering him to put the activities of trade union on hold.
Workers at the factory have prepared 600 suits against the plant’s management over what they say is 9 million rubles ($330,000) in night shift wage arrears. The plant’s management filed a 4.5 million ruble ($164,000) suit to compensate for losses from a strike in November 2007.
Some 1,000 workers at the factory halted production on November 20 last year demanding a 30% pay rise. The strike lasted nearly a month and ended when management agreed with the union to increase wages by up to 21%. Welcome to Infoshop News Saturday, November 22 2008 @ 04:24 AM CST

Russian Union Leader Alexei Etmanov Attacked and Threatened with Death
Wednesday, November 12 2008 @ 08:14 PM CST
Contributed by: WorkerFreedom Views: 174
On the night of November 8, Alexei Etmanov, the chair of the trade union committee at the Ford-Vsevolozhsk plant, returned home from the second shift. He parked his car in a lot and headed for his house. On Heroes Street three men jumped in his path and without uttering a word attacked Alexei. They were armed with knuckledusters.

On the night of November 8, Alexei Etmanov, the chair of the trade union committee at the Ford-Vsevolozhsk plant, returned home from the second shift. He parked his car in a lot and headed for his house. On Heroes Street three men jumped in his path and without uttering a word attacked Alexei. They were armed with knuckledusters.

During the tussle, Alexei managed to pull a stun weapon from his pocket and get off a shot. The cloak-and-dagger types beat a hot retreat.

Etmanov told a police investigator that in his opinion the assailants were ordinary “yobs.” However, he turned out to be wrong.

The following day, Etmanov’s deputy, Vladimir Lesik got a call on his mobile phone. The caller warned him that the nighttime incident had nothing to do with robbery or mugging.

“You got a mild chewing-out. But if you keep getting in our way, you’ll part with your life,” the anonymous caller declared.

The combative trade union at Ford-Vsevolozhsk gets in a lot of people’s way–both employers and dealers. And, by establishing the Inter-Regional Union of Auto Industry Workers (MPRA), the young workers of Vsevolozhsk have also gotten in the way of employers in Taganrog and Togliatti, as well as those trade union organizations that the authorities use like an “engine whistle” to let off the steam of popular rage.

It is a matter for the police to find out which of these forces attacked a labor leader with knuckledusters.

For our part, we would like to remind our sons of Lenin’s statement that a revolution is worth its salt only when it knows how to defend itself.

Trade union activists are in the process of preparing an appeal to the police to open a criminal investigation.

This is not the first time that labor activists have been attacked in Russia. We have written many times that the bosses are trying to intimidate workers and crush the seedlings of the evolving class struggle. Threats and violence against labor movement activists have become an ordinary affair in our country. In this situation, all communist and labor organizations should band together and oppose the terror of discrete members of the bourgeoisie with class solidarity. All incidents of such pressure on workers should be as widely reported as possible, and the protest campaign against the current practice of conflict resolution should be as noisy as possible.

Along with the Saint Petersburg and Leningrad Oblast Committee for Solidarity Actions (KSD), as well as socialist and trade union organizations, the Marxist Group Workers Action (MGRD) has begun a campaign of protest against the actions of the administration of the Taganrog Auto Plant (TagAZ), which is part of the MPRA that Alexei Etmanov co-chairs. (It cannot be ruled out that the attack on Etmanov and the attacks on and threats made to union leaders at TagAZ are links in the same chain.) We call on all socialist and labor activists to join in our campaign–to distribute information about the illegal actions of employers, participate in pickets planned both for Petersburg and other cities, to send protest letters to the e-mail addresses of the bosses, and so forth. You can find updates on our campaign on our website. If you are able to help us in any way, please write to us at: red@marksizm.info 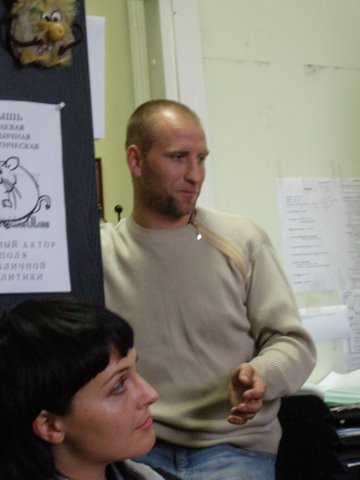