New Orleans       Ken Lewis, the CEO and Chairman of Bank America has somehow joined Vikram Pandit of Citi as about the only old bulls of banking still left sitting after the implosion within the financial services industry.  It is almost unbelievable that they are still there.  Pandit has shed and shuffled board members, including bringing in the former head of Time-Warner to flak catch for him.  In biting off Merrill Lynch and absorbing John Thain and his “issues” at the same time, Lewis finally had a lot of the mess catch up with him, but is still trying to dance step his way out of real accountability.

SEIU and others have correctly called for him to step down so that a new day can begin at Bank of America.   It seems inevitable that Lewis must go and now seems a good time for it.
Unfortunately, as Charlotte Observer reporter Christina Rexrode observers in a skillfully garnered quote, there is no such thing as shareholder “democracy,” and the “ballot stuffing” may prevail in the votes being counted now on the question of Lewis’ ouster.  These pieces of her story tell the story better than any other that I have seen:

Angry shareholders want Lewis ousted this week, but the rules make it unlikely he will be removed.

“You’ve had this awful plummet in share price, and, in the middle of that, a lackluster acquisition of Merrill Lynch,” said William Atwood, director of the Illinois fund. “And if you’re not going to make changes now, in what circumstances would you make changes?”

But of those investors, even the largest — TIAA-CREF — holds only 0.56 percent of the bank’s 6.4 billion shares. The rest hold far less.

Another disadvantage for opponents is the issue of shares held by brokers. If an individual holds shares through a brokerage and doesn’t tell the broker how to vote, then voting power generally transfers to the broker 10 days before the shareholder meeting. Brokers almost always vote in the company’s favor.

“Many people consider that legalized ballot stuffing,” said Davis, the corporate governance expert. (The SEC is accepting comments on whether this rule should be amended. Go to www.sec.gov/rules/sro/nyse.<wbr></wbr>shtml and look for the proposal about Rule 452.)

CtW Investment Group, representing a coalition of unions with Bank of America pension investments, estimates the broker vote will make up 22 percent of shares cast. That means Lewis and other directors need only about 36 percent of all remaining shares voted to win re-election.

“I see a very big shareholder vote against (Lewis),” said Michael Garland, CtW’s director of value strategies. “But I think it’s likely he will get (the necessary) 50 percent plus 1 with the broker vote.”

Jon Finger, of the Houston-based investment firm spending $75,000 on a campaign to shake up the board, said Lewis is more likely to win re-election than Sloan.

“Some institutional investors,” he said, “may be concerned about maintaining stability at the company.”

Unlike a political election, Bank of America knows the results of the voting so far. Investors can change their votes up until the meeting. Abstentions do not count either way. That means if there are 100 shares, and 70 are not voted, a director needs 16 votes to be elected.

The bank isn’t disclosing interim results. “We won’t speculate on the results or what we would do if any vote goes against us,” said spokesman Scott Silvestri.

Corporate-governance experts say the bank is likely trying to bargain with institutional investors who have cast their votes against it.

“They can twist and cajole,” Reda said. “They can say, ‘OK, Lewis will agree to leave the company at the end of the year if you change your vote.’ And one minute before the shareholder meeting starts, somebody can fax in a change to their vote and swing the election.”

The shareholder groups and the company would probably prefer to work out their differences behind closed doors, Reda added. The public fighting “tarnishes the bank’s reputation, and as a shareholder what do you want that for?”

If Lewis loses his seat on the board, he would still be CEO. But experts agree that he’d almost certainly resign that post, or risk shareholder outrage.

Even if Lewis and his directors win re-election, it doesn’t mean they’re in the clear. Shareholders still sound a pretty loud message if they garner significant, but not majority, opposition against a director.

“I could be wrong, but I think all the directors will be re-elected,” said Ray Groth, co-founder of Duke University’s Directors’ Education Institute. “But if one gets even 30 to 40 percent against him, they’re going to sit up and say, ‘Boy, maybe we need a few fresh faces on the board.'”

“To be honest, the likelihood of winning when you’ve got so many shares and such broad shareholdings — it’s going to be difficult to unseat anybody,” Cernich said. Staff writers Rick Rothacker and Kerry Hall contributed. 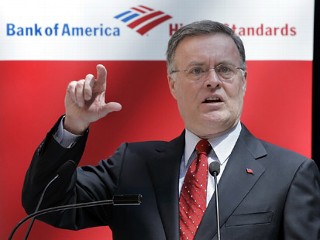