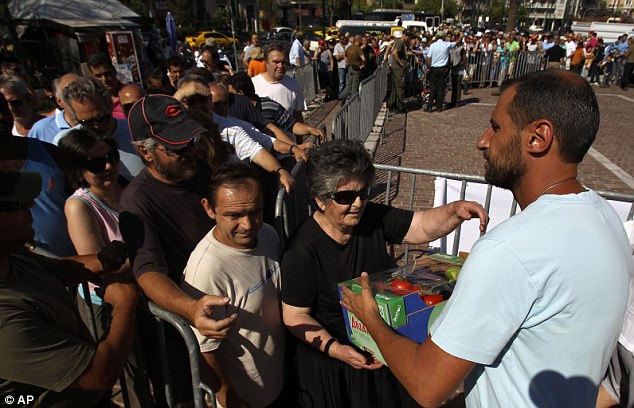 in line for donations in Athens by Crete farmers

Thessaloniki   The point is so obvious that it almost seems trivial.  Of course, Europe is different from the United States and every country within the European Union is also different from the others in history, culture, and often language.  No visitor fails to remark about the feeling in Europe of walking in ancient footsteps. Walking by a Greek column that is not a replica but an artifact is as common as remnants of construction during this Roman emperor or another.

Yet, the differences I notice are so much more than that the longer I stay and the more I travel.  If the wealth of an England or France seems eye to eye with the United States, Greece seems more like Mexico or even Paraguay.  Here people grudgingly say that the economy is slightly improving, but still talk of “the crisis” in Greece as the daily occurrence that they still feel everywhere.  University professors’ shop at the co-op store, not just because of a political persuasion but also because with their salaries have been cut to shreds, it is what they can afford.  Students who once enjoyed free education are now having to cobble together money to stay in school.  A sign in the men’s washroom, written in English, said perhaps too much about the situation, as the letters shouted “We Need Toilet Paper!”

The social welfare system is an entitlement for the unemployed in a way that US workers would find unimaginable.  Talking by Skype last week to a young man in Frankfurt, Germany about organizing a tenants’ union there, it was not a surprise that he was on public assistance while he tried to pull these pieces together.  For students the same is true and reduces the panic of joblessness and opens the door to opportunity to find a place whether in Greece or Scotland or France.

The political diversity of multi-party experience may seem fractured, but is actually invigorating.  Casual introductions that include the fact that so-and-so was a former Communist city councilman or that this one or that were key activists in the anarchist community or that this tavern owner or landlord or even neighborhood were well-known as anarchist strongholds.  In the United States such a comment would seem extraordinary, possibly subversive, and the subject of a special feature on Fox News, but in Greece it is so commonplace that it hardly bears mentioning.  Politics of almost all persuasions seems mainstream rather than marginal.  In a multi-party politics rather than a two-party system one has to cultivate a certain tolerance because it is impossible to predict where the party slightly left or right might end up your coalition partner in government or opposition.  The choices can both make or break politicians and parties, raising some up, and destroying others.

The nuances are almost impossible for a stranger visiting from afar, as I am, to navigate without constant guides who prove their worth by the paths they point both away from trouble and to the company of friends.  Being accused of having an “American perspective” is an insult and a caution.  Listening and watching for the clues is constant, because the lessons are everywhere and the learning curve is steep.  To assume something is the same in Europe as in America is a guarantee of falling over the cliff.