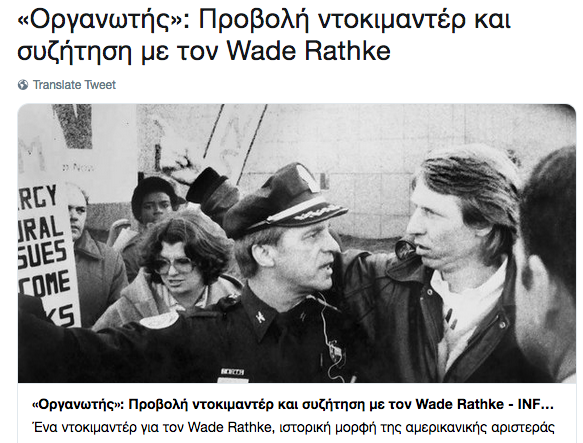 Thessaloniki    The twenty people watching “The Organizer” documentary screening in the classroom at the Aristotle University in Thessaloniki, Greece, were all either PhD candidates in political science or professors.  They began with a good, open-minded attitude and were friendly and tolerant as we worked to get the pieces together at the last minute.  We had experienced our usual snafus at the airport of missing each other in the waiting area for several hours, so by the time I taxied to the university with help from a mutual friend in Brussels transcribing the location for me from the flyer, we hardly rendezvoused at the stated start time.

Though the script had been translated into Greek, the technical transfer of captions into the documentary didn’t really get done, so everyone had to make their way through the film in English.  The professor was convinced this would not be a huge issue, and perhaps it was not at least for some.  One woman before the meeting said she was actually from Bennington, Vermont though she had been in Greece for years.  Another, surprisingly, had spent a year in high school in Shreveport, Louisiana, and had traveled in Texas, and she thought it likely in Arkansas as well.

Nonetheless, the Q&A section that I live for was difficult.  No small part of it was likely on me.  Having been up for almost 36 hours straight, I was likely less patient than usual and certainly not at the top of my game.

The political science students were earnest.  They wanted to believe that there might have been a magic bullet that could have saved ACORN when it was under attack in the United States eight and nine years ago.

One asked whether we were familiar with other kinds of currency systems that might have allowed ACORN to avoid the “capitalist” system and cited various small-scale examples of experiments with alternative cash-credit programs.  In answering I said I was familiar with some of the trials, and even nodded knowingly to the woman from Vermont that I thought some of them were in that state, but that, frankly, that had been outside the scope of an organization like ACORN, regardless of its size.

This was a sophisticated crew so there were no questions about social media, but there was a detailed question about anarchism and the structure of ACORN, which I weathered.  There was another lengthy question that seemed to hope that the problem was that ACORN was an NGO and wanted a detailed list of how we distinguished ourselves, that I was happy to provide though left the questioner unconvinced from what I could tell.

Then there were a number of questions that firmly believed that if ACORN leaders and staff had a more committed and traditional ideological framework then the organization might have survived even though they had been “duped by Clinton and Obama,” as the questioner argued.  I made the case for the organization’s own internal ideology, but could tell I had not convinced the crowd, perhaps because the very demise of ACORN in the United States likely proved the weakness of my argument.  I was probably simply lucky that the students did not press home that point to my embarrassment, and finally left so I could find my way to my sleeping pad and get some rest to fight the wars another day.