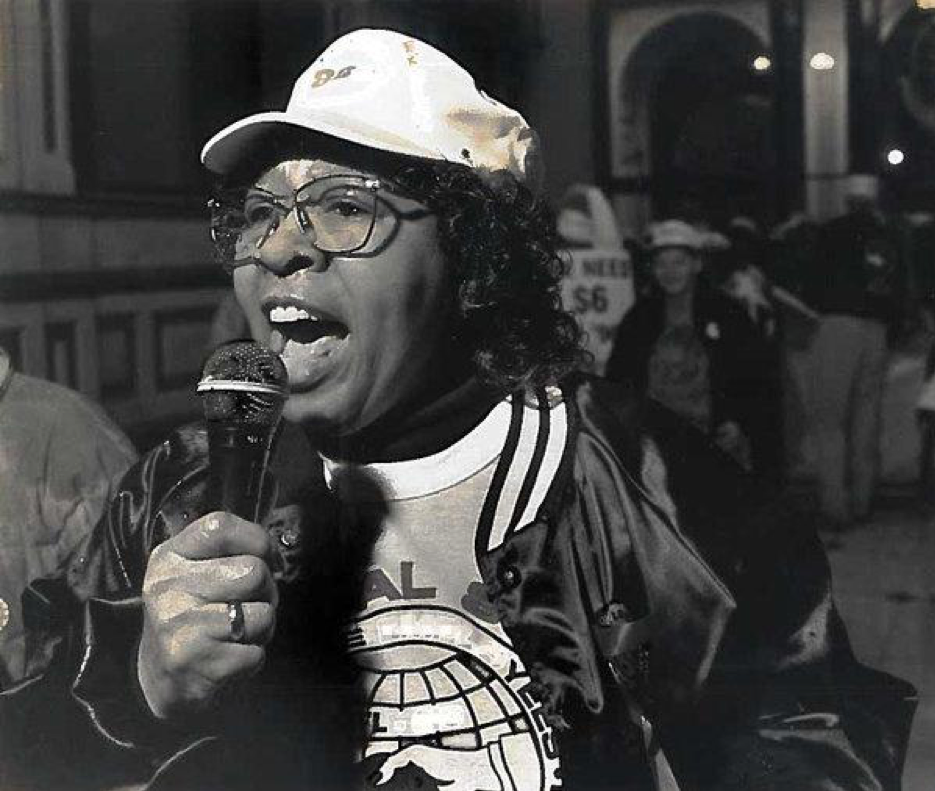 Helen Miller, president of Local 880 of the S.E.I.U., led a march of hundreds of home care workers on the State Capitol in Springfield, Ill., in 2005. Mrs. Miller spent two decades fighting for recognition for those workers.

New Orleans       Helen Miller was a great leader in the United Labor Unions and then SEIU Local 880 as well as ACORN both in Chicago and as member of the national board of ACORN for many, many years.  She was also a mentor and inspiration to us all.  When she retired, she moved back to Louisville, Mississippi, her old hometown.  When we weren’t talking about organizational business, we often talked about the similarities and differences between Louisville and my mother’s hometown of Drew, Mississippi, a couple of hours away in the Delta.  I knew her well, and she will be greatly missed by all of us who followed her and fought beside her.  She was honored with an obituary in the New York Times by Richard Sandomir, which reads as follows:

Helen Miller, who took care of the sick and the elderly for nearly 40 years in Chicago while championing her fellow home care workers, fighting for greater pay and benefits as a union leader and speaking eloquently about the dignity of their work, died on March 5 in Louisville, Miss., where she was born. She was 82. Mrs. Miller believed that helping the sick, elderly and disabled was a critical service that the state of Illinois undervalued by paying thousands of workers poverty-level wages and offering no benefits.

“I took care of some people for 10 or 15 years, trying to give them the same kind of care I would give my own mother,” she said in a document published in 2003 by the Service Employees International Union when Mrs. Miller was president of Local 880 in Illinois. “And it affects you. When you lose them, it hurts the same as if they were a family member.”

Her activism began in earnest in the 1980s when she and her fellow workers were still categorized as independent contractors; while their local was affiliated with the S.E.I.U., it did not have the fundamental right of unions to collectively bargain on behalf of its members. That would not come for many years — one of the many battles Mrs. Miller helped to lead.

One of Local 880’s earliest fights was to bring all of its workers’ pay up to the prevailing minimum wage of $3.35 an hour; some of their time was deemed by the state as “supervisory pay,” which brought them only $1 an hour. In 1987, when she was a vice president of the local, Mrs. Miller testified emotionally to the Illinois General Assembly in Springfield, asking lawmakers to consider how poorly she and her fellow workers were paid.

“It was the first time she had ever testified, and she was really intimidated,” Keith Kelleher, a head organizer during Mrs. Miller’s time at Local 880, recalled in a telephone interview. “She told me, ‘I saw all those fancy people in their fancy suits and dresses and I was just a home-care worker.’ But she told them, ‘Don’t listen with your heads, listen with your hearts. Even if it is legal to pay us $1 an hour, we deserve a living wage.’ ”

The legislature soon after raised the workers’ pay to $3.50 an hour (the equivalent of $7.65 today) and eliminated the $1 supervisory pay. 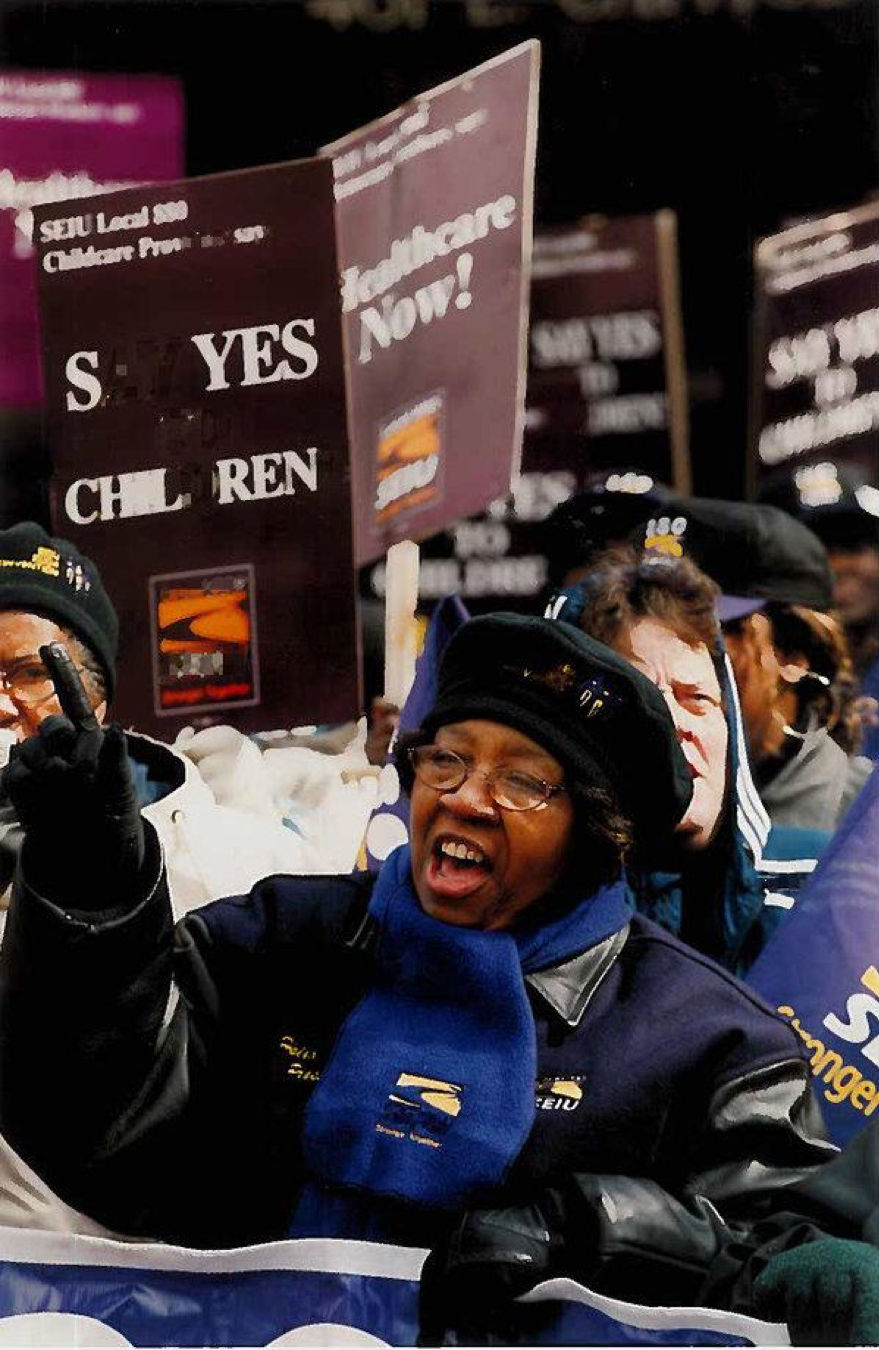 Thanks to Mrs. Miller’s efforts, home care workers in Illinois saw their wages rise and were allowed to bargain collectively. (CreditDavid Kamba)

Helen Ruth Ashford was born on May 26, 1936, to Buster and Clara Ashford, who managed their farm. Helen attended an all-black high school in segregated Louisville, then moved to Chicago after graduating, finding jobs in industrial laundries and marrying Collin Miller, a construction worker. After about 15 years of laundry work, she became a home-care worker.

Mrs. Miller continued to work with her home-care clients, taking buses to care for them, even as she became increasingly active in the union.

She organized home care workers in other cities and led rallies and protests in Springfield, Ill., and Chicago. Sometimes, she led union members in the gospel song “Victory Is Mine,” other times declaring that they were like Moses telling the Pharaoh, “Let my people go,” Kelleher recalled.

While speaking in 1995 at a White House Conference on Aging, she told the delegates about the home-care workers’ ongoing struggle for pay and respect.

“I love my job,” she said. “But please listen to me. We are never listened to. We make minimum wage without a single benefit, and yet we are the people who keep your mother, your father, your sisters, brothers, uncles and aunts out of nursing homes.”

She added: “We aren’t the greedy. We are the needy.”

After serving as the local’s treasurer and vice president, she was elected its president in 1999, serving for eight years until her retirement.

She also helped voter registration drives in the 1990s directed by Project Vote, which was led by Barack Obama before he was elected an Illinois state senator.

The union’s hard work paid off. Wages rose, fitfully, and in 2003, Illinois passed legislation that allowed the local to bargain collectively for its members. That right led home-care workers to negotiate for health insurance and take advantage of a state-funded education and training program that is now named for Mrs. Miller.

Mr. Kelleher said that during his visit to her last month, Mrs. Miller still sounded like an agitated union leader.

“There she was, with stage 4 stomach cancer,” he said, “and as I walk in the door she starts saying, ‘Keith Kelleher, Local 880, I’m fired up! I can’t take it no more!’ That was one of our chants when we were going up against the state or a private company. And she’s still saying it on her deathbed.”