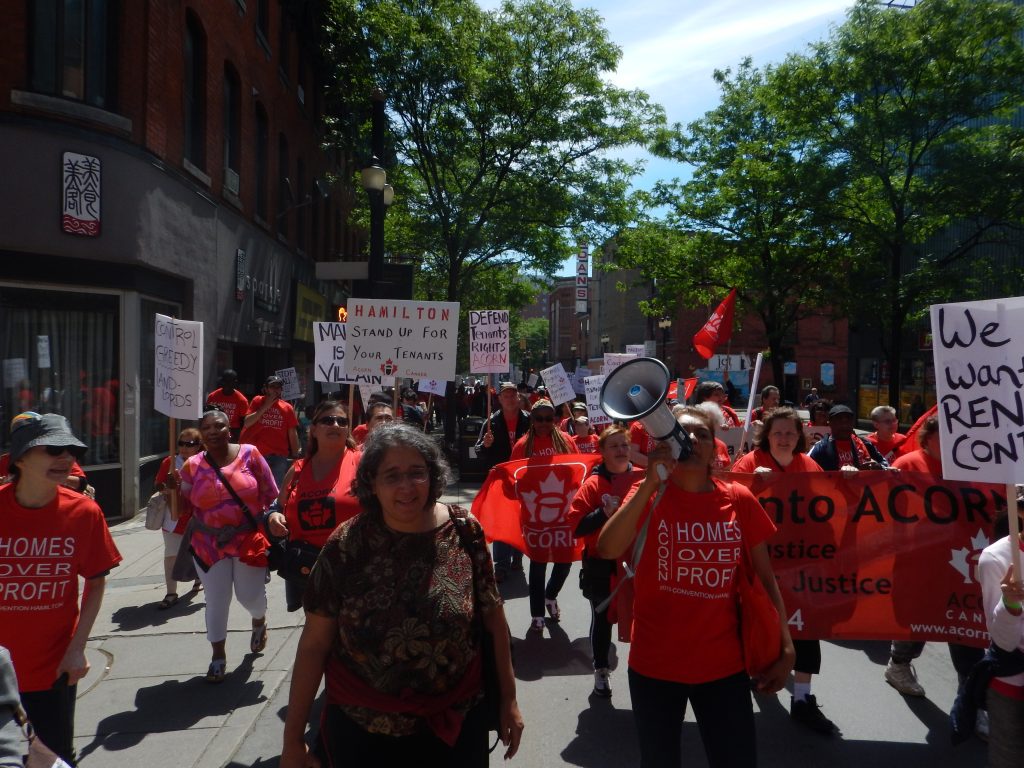 New Orleans      Landing in New Orleans at 1:30 AM, the calendar alert said it was ACORN’s anniversary, our 49th birthday.  The real celebration though had already happened the day before in Hamilton, Ontario, as ACORN Canada’s Convention had featured a final day of marches and multiple actions on a gorgeous day in every way. 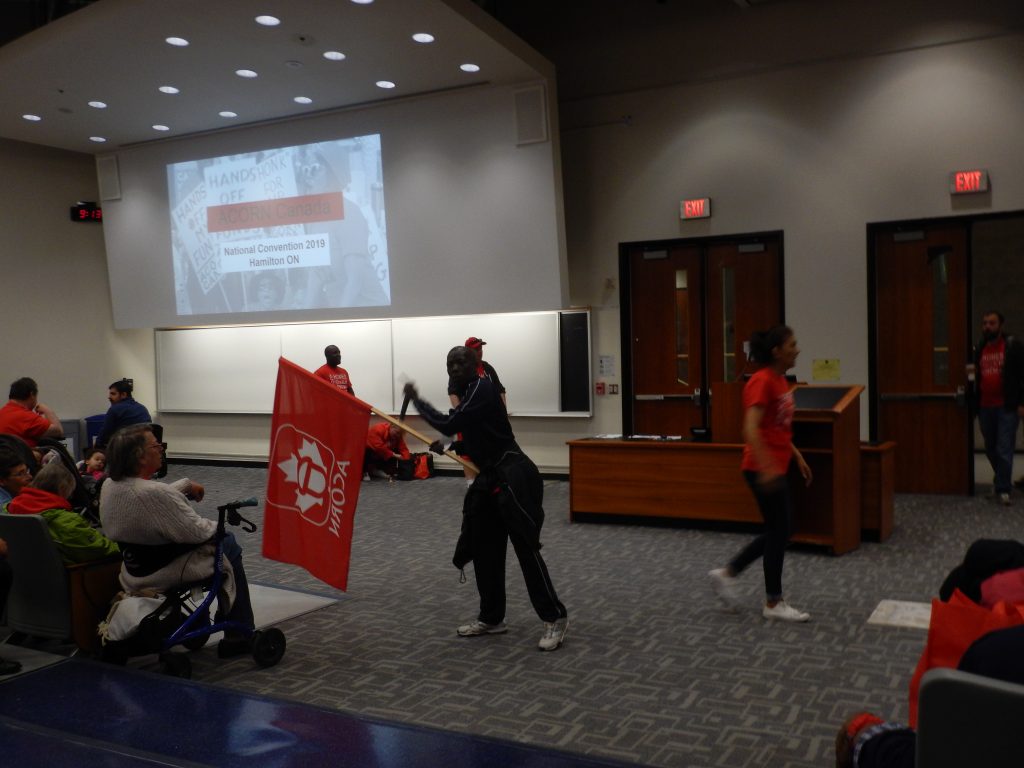 The crowd shook off their early morning wakeup and packing and rocked the halls of McMaster University as the leaders led the chants before the buses loaded up to take everyone to the rally site at a local park near downtown Hamilton.  This was going to be a day of not one-two punches against landlord renovictions in the city, but almost a one-two-three-four swing of roundhouses for tenant rights and against rapacious gentrification not only in Hamilton but across the country.  As the members were assembling to march, an advance team of several dozen was already at work putting banners on various Malleum properties along the downtown corridor.  Malleum has been a Hamilton-based property owner that has exploited rising rents and evictions on the pretense of renovations to evict tenants. 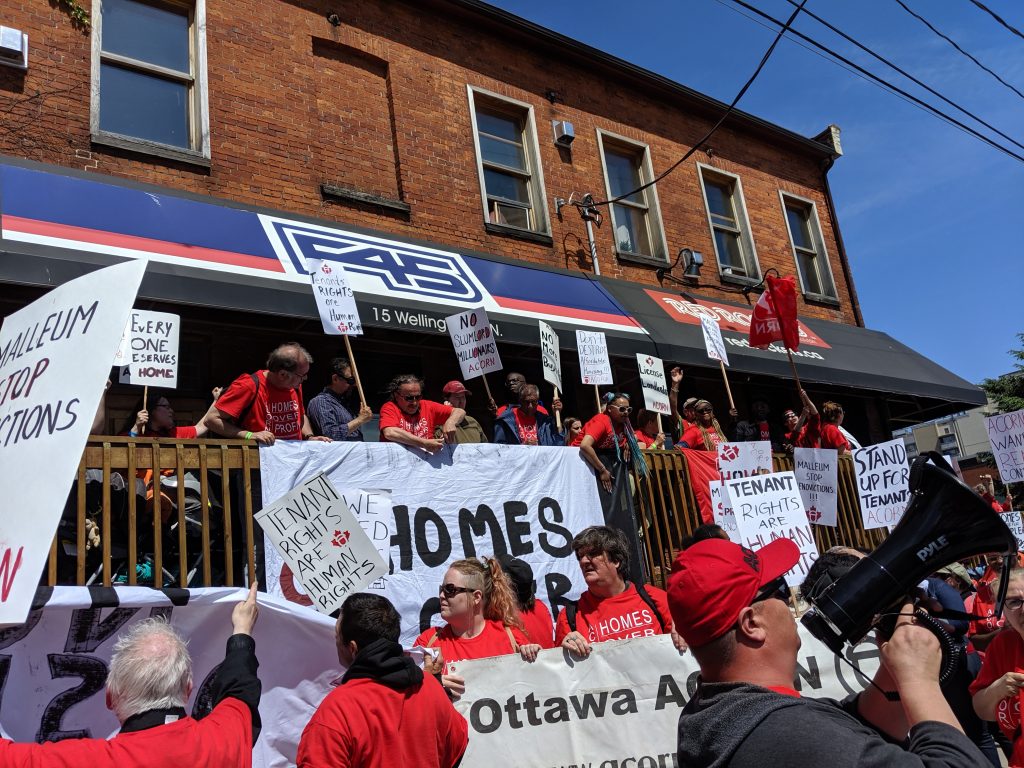 The first stop on the march of course was the headquarters of Malleum itself which was on lockdown as members streamed up the steps and accessible entry points.  Others hung protest banners over the balcony as members let their voices roar about the “war on the poor.”  The next stop as the march snaked through the streets towards the center of town was yet another Malleum property in development.  A second punch delivered. 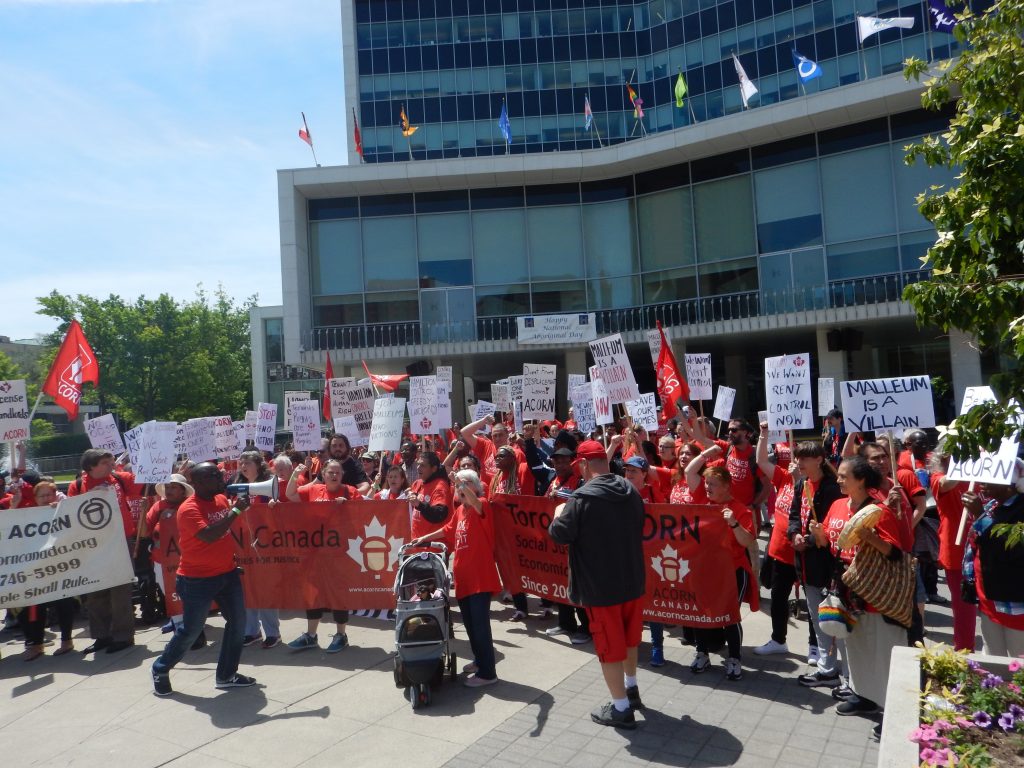 Most days this would be a good day’s work by the hundreds of members from around Canada who assembled to make their points heard across the county.  Not today!  The march stretched several blocks in length now and had attracted an extensive police escort as we took the street and left the sidewalk behind.  It should not have been a surprise to bystanders or our escorts once the chants changed to RBC, the Royal Bank of Canada, as a predatory lender, that another upper cut was coming in hard as a haymaker.  When we hit the building, organizers opened the doors and all of the members came streaming into the mall entry at the ground level, then down the stairs and around the bend, as building security grabbed their radios and hit call buttons, the ACORN members marched into the bank itself, filling up the space.  The demand was straightforward:  stop lending to predatory landlords evicting tenants in rent gouging schemes!  There’s no more hiding the hand, while the Malleum’s throw the rocks at tenants the banks are enabling. 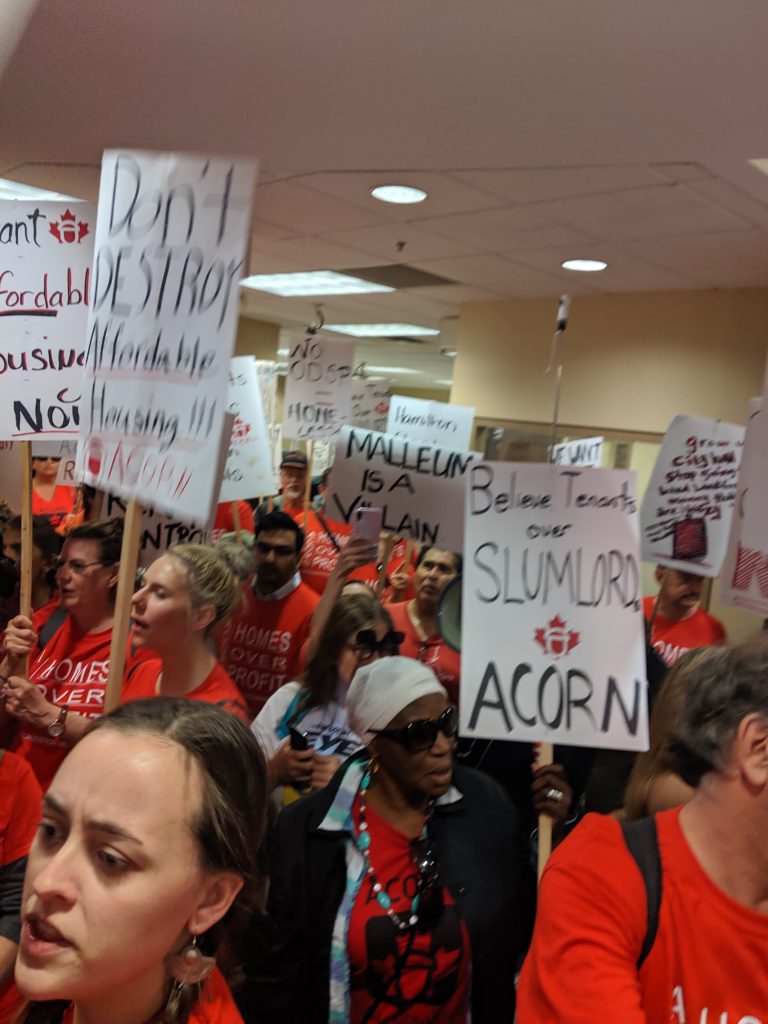 Not through yet, the march ended in a rally in front of City Hall demanding more protection from city bylaws for tenants in these ongoing battles.  The previous day members had door knocked in three wards initiating phone calls to city councilors and generating hundreds of signatures on petitions for support of rent limits and tenant protections.  One of the councilors came down from city hall to address the members briefly in response.

ACORN at 49, still kicking and swinging at the enemies of low-and-moderate income families.  That’s the way to celebrate any birthday.  For icing on the cake, the busloads of members from Ottawa detoured through Toronto to the headquarters of Timbercreek, a REIT that has resisted our demands, winning a meeting.

How sweet it is! 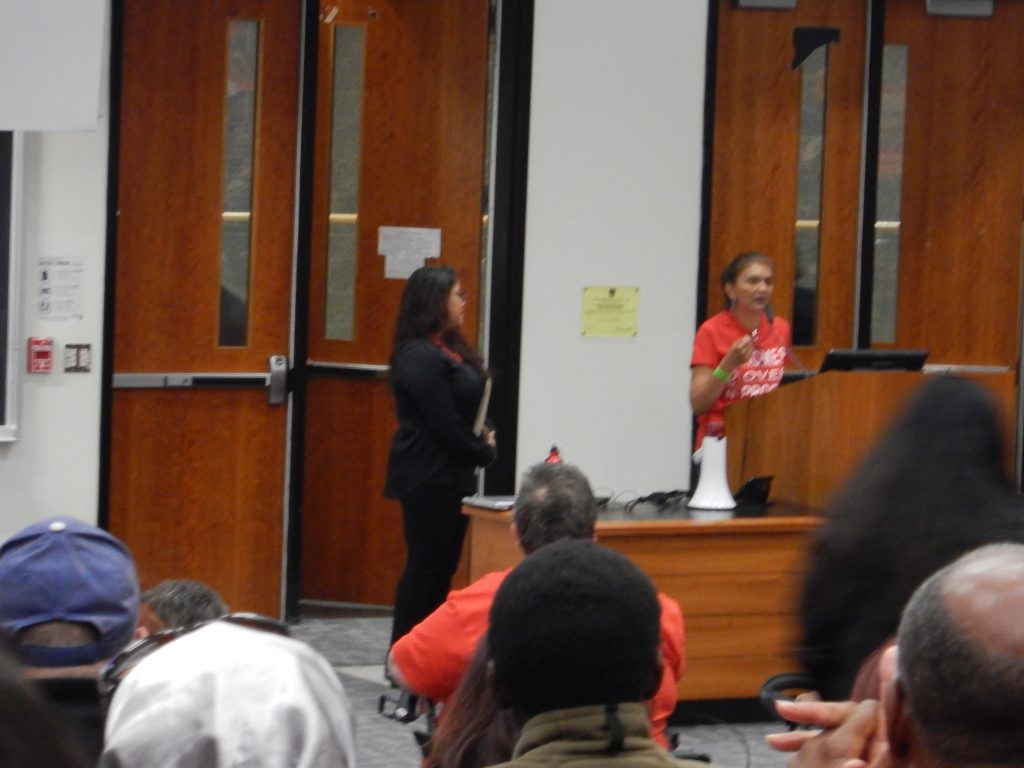 Hamilton     The ACORN Canada biennial convention is many things to many people, especially ACORN members, but it is also a measuring stick of the increasing power and influence of the organization.  There were more members in attendance.  There were more cities represented.  Even the fact that the convention was held in Hamilton where the organization has been resurgent in recent years.

Listening to some of the guest speakers was an excellent barometer.  After fifteen years, ACORN has clearly become an essential part of the progressive agenda.

The first day included a rousing call to action by a newly elected city councilor in Hamilton, Narinder Nann, whose district includes several of the local ACORN groups.  It is also ground zero for pressure on tenants from developers and evictions.  Rent has soared to over $1100 per unit in recent years.

Anthony Marco, president of the Hamilton District Labour Council was also rousing, and his speech could have been given by an ACORN leader.  He talked about the privileges that came with his position and the fact that he had made a living wage as a teacher and had a pension when so many didn’t.  He had a great line about the ridiculousness of candidates that talk saving the middle class, rather than acknowledging that we were working class people in a rich country and needed to do better for its people. 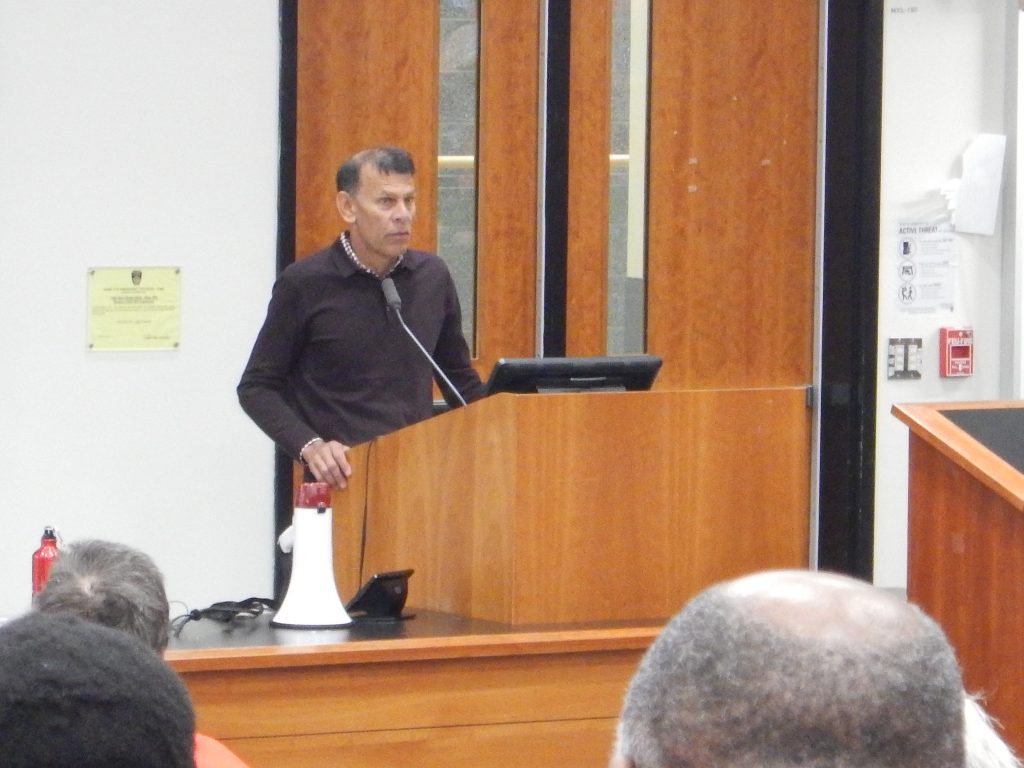 The head of the Canadian Labor Congress, Hassan Yussuff, spoke at length.  Along with the other speakers, he recognized the fact that ACORN was a vital part of any coalition with progressive goals, he underlined that by raising up key parts of the labor program that were shared with ACORN.  Affordable housing was one, but so were issues that in many countries organized labor would not have highlighted.

He spoke of the need to raise welfare benefits by 30%.  He used his own mother as an example and the fact that she was almost 95, but her pension wasn’t enough to live on.  He made a point of the issue for unemployed having the right to appeal their denial of benefits that had been taken away from them under other governments.

Listening to all of these speakers it was clear that they were not simply pandering to the ACORN crowd but had embraced our issues as their own.  To hear the head of the national labor council talk about predatory and payday lending, long an issue that has been a standard bearer for ACORN’s work in Canada was a clear sign of the organization’s centrality in the progressive ranks.

It turned out that NDP, the New Democratic Party, the left amalgamation in Canada was having their national convention in Hamilton at the same time ACORN was there. Jagmeet Singh, the head of the NDP, came by to say hello as members were registering for the convention at McMaster University.  Years ago, when he was a member of Parliament, he had introduced our bill on remittances.