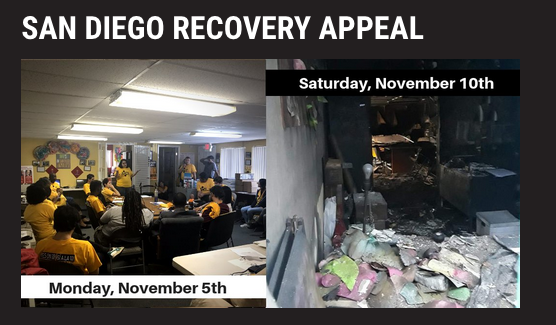 New Orleans      Fires all over California have been front-page news.  The town of Paradise became the opposite for many with the death count still rising.    Homes have been obliterated by raging flames, sparing no one including singers and celebrities in Southern California.  Trump has been raging and spouting his flaming and blaming rhetoric in order to avoid coming to grips with the fire this time from climate change.

One fire should have been on front pages and wasn’t.  I started getting messages in the middle of a Saturday night in San Pedro Sula and emailing back and forth trying to find details from friends and comrades around California during the weekend.  The news was terrible, but the reports were nonexistent.  The internet was silent, yet the message was clear:  an office of ACCE, the Alliance of Californians for Community Empowerment, the former California ACORN, had been destroyed by arsonists over the weekend.  It took a while to track down the details, but this was the Chula Vista office in San Diego County, halfway between San Diego and the Mexican border.  Fortunately, there were no injuries, but the office was literally a meltdown.

The best account of the details was finally available in an article by Doug Porter in the San Diego Free Press.  Police were unequivocal that the fire was arson.  There had seemed little doubt that it was in retaliation to the organization’s work.  A pile of ACCE t-shirts were  burned on the grass in front of the office.  Porter, and many others, speculate that the outburst was triggered by the well-publicized leadership that ACCE recently played in bringing an amendment to the statewide ballot that would have expanded rent control options around state.  The measure was opposed in a wildly expensive campaign by the real estate interests and some state mayors beholding to them, as well as governor-elect Gavin Newsom, despite the rental crisis for lower income and working families.  The measure was defeated by almost 2 to 1.  Perhaps more immediately the anger might have been provoked by Proposition W on the National City ballot, a city cheek-to-jowl with Chula Vista and largely staffed and supported by that office, that would have limited rent increases to the same level as the Consumer Price Index and capped annual hikes at no more than 5%.  “W” lost narrowly.

No matter, this was an attempt at organizational assassination.  Spokespeople for the organization stood tall and argued sternly that their commitment to the work would continue.  The silence from others who should be standing against this attack and in support of ACCE and community organizing was as tragic.

Police have now arrested a 28-year old homeless man who was in a dispute with the property’s management, discounting some of the earlier more political arguments, even though homelessness is itself a political issue that also ensnares community organizations like ACCE.

In the wake of the arrest, the organization has released the following statement:

“Given the information that we had and the political moment that we are in, many of us feared that the attack was politically motivated.  We are relieved to hear that this wasn’t the case.  We note with regret that the arsonist was an unhoused person. The sad irony is that ACCE fights for housing rights. No one should have to suffer from acts of violence like this one. And no one should be subject to the challenges that the most vulnerable sections of our society face as a result of the housing crisis.”

This doesn’t settle the matter.  The harm is done and continues.   ACCE is raising funds to re-open their office at: https://www.acceaction.org/donate.  The bricks-and-sticks don’t matter, the work must continue.  The silence must be met by the roar of peoples’ protest, if these random and targeted acts of violence are ever to be stopped. Oakland    Running up and down California from south to north and back and forth to do Q&A after trial screenings with the documentary, “The Organizer,” and coupling that with my new book, Nuts & Bolts:  The ACORN Fundamentals of Organizing, I have been trying to determine how we might use the film as an organizing tool.  Oakland was going to be the big test of whether this worked.  Little Rock had been great, but we were the “home team” there.  In California we would be the “away” team, a long way away, so how would it work.

Francis Calpotura of TIGRA and In-Advance jumped at the opportunity to see if there was a way to use the film, the book, and even my being in town to bring all the pieces together, jump over some of the fences between organizations and organizers and promote community organizer training sessions being put together by In-Advance at the same time.  It would be a leap, and Francis was game to make the jump without a net.

Starting a couple of months ago, he and his team found an old funky theater everyone called the Parkside, but whose current name is the New Parkway in downtown Oakland.  Then they began working their old networks from the Center for Third World Organizing (CTWO), the Applied Research Center (ARC) now called Race Forward, and Minority Action Program (MAP) graduates.  They reached out to allies and friends, including the Alliance for California Community Empowerment (ACCE), the former California ACORN.  I did my part as well.  A good piece by Jay Youngdahl previewing the film and ACORN’s history came out in the East Bay Express.

We were on new, unsettled ground.  We were organizers.  What did we know about film promotion.  Every couple of weeks, I would reach out for Francis to see how it was going.  Surprisingly, he was always upbeat.  Half the tickets were sold two months ahead of time.  Every week it seemed like we had a chance at filling up the 150 odd seats.  Old timers, former interns and volunteers, funders, and friends were all responding.  A radio network friend stepped up with an idea to do a small reception before the event.

Comes the night of the screening, and the place is hopping.  It’s sold out!  The theater hustles food to the audience, and they are beaming.  People laugh, hoot, and applaud at the right times.  The Q&A is serious business.  People want to know more about organizing.  They want to DO organizing.  They want to know “lessons learned” and what I “would do differently this time.”  Gary Delgado sits next to me and Brittany Carter fresh from training is the MC, and we’re taking all comers.

Organizers from unions, research centers, housing agencies, tenant groups, and community organizations were all sitting together, talking with each other, and mingling on common ground around the film.  Books flew off the shelves like hotcakes.  New ACCE and old ACORN come together with stories of people, the past, and future that they share.  People were signing up for training sessions with In-Advance.

Wow!  We may not know exactly what we are doing to make this film an organizing tool, but people are responding.   They are hungry for a way to find common ground and make things happen.  The film becomes an excuse to reach out, fill the void, and gird for the coming battles.

There’s something to all of this, and we need to figure out a way to get the word out and pass it around.