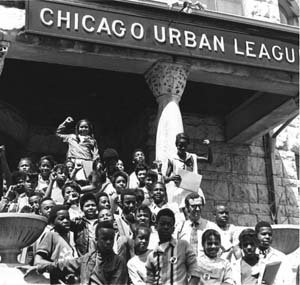 Nairobi        What would you do in a plane for seventeen hours between New Orleans, Washington, Zurich, and finally Nairobi?  Try to sleep, surely.  I tried that.  Watch a movie or two?  Ok, but that can be a climb.  Read, yes, absolutely.  Among other books I read on these flights was one about block clubs in Chicago.  The author, historian Amanda Seligman, had come up to me when I visited at the University of Wisconsin-Milwaukee, given me her card, and written the name of her recently published book on the back, Block Clubs in Chicago:  How Neighbors Shape the City.  I read it on my Kindle with interest.  I’m sure we’ll talk about block clubs more sometime in the future, but a couple of things piqued my interest.

Seligman’s book introduced me to the role of the Urban League in forming block clubs in Chicago, as well as other cities in the 1950s and early 1960s under various grants from donors, some of them meddling, who were dedicated to “racial uplift.”  Interestingly to me, she covered some of the organizing problems the League’s team had in making contacts on the block in order to build the clubs.

I had a nagging thought the whole time I read these sections?  They used flyers.  They mailed to contacts.  They door knocked.  But they had trouble building a list on the blocks.  Why did they not do what ACORN did and use R. L. Polk’s famous city directories that annually listed all addresses, owners, residents, occupations, and other information?  In building ACORN, Polk’s was mother’s milk to our organizers in building lists.  Every library had a copy.  Even for an annual subscription that used to run up to $600, it was often the first purchase in an ACORN office after the mimeograph machine.  This would have made their organizing so much more effective and easier.  Landing in Nairobi, I could hardly wait to find out the answer.  Sure enough, Polk’s began publishing its Chicago numerical directory in 1928-29 according to the Chicago Historical Society, so they were firmly established there and in 700 cities, counties, and countries.  So, it was available.  Was it simply not accurate in majority African-American neighborhoods or was it unknown to the organizers?  I also wondered if former New Orleans Mayor and longtime director of the national Urban League, Marc Morial, has any idea of the League’s role in community organizing of a fashion, “back in the day?”

Here’s the other question that fascinated me from Seligman’s research.  She found that up until relatively recently the Chicago Police Department employed more than twenty community organizers in a community policing program.  She made the point several times in the book, that the CPD in effect had the largest community organizing program in the city with the most organizers on their payroll.  Given the more recent problems between the Chicago police and the community, I had to ask, why with such a supposed commitment to community organizing and community policing, did they have such a horrific record in actually dealing with the community, especially the nonwhite community?  What happened there?  How did this go so terribly wrong?  Was it just the police or a defect in the organizing?

There are some people who play games on planes.  Others that take enough of whatever to knock themselves out.  There are people who work math problems in their head, so I have heard.  For me, these are among the kinds of questions that take over my mind in the space left between the roar of a plane’s engines. Picture featured in the December 1968 edition of the Jesuit Bulletin.

That’s only partially because sometimes the conversation would toggle back and forth to the work the Contract Buyers’ League did on Chicago’s West and South Sides decades ago from 1967 to 1972 or so, as strategies and tactics that would address the current, horrid, predatory comeback of contract-for-deed purchases were compared to the old campaign in a day long and continuing conversation between CBL veteran organizers and leaders, contemporary activists, and concerned community and clergy. It is also because we were literally sitting among the remaining survivors of the ghettoization and depopulation of North Lawndale and Austin as we met in beautifully paneled rooms in one rectory in Lawndale and slept in the former rooms of long reassigned priests in the empty floors of another rectory in Austin managed by one priest now, where eight had once lived.

Real estate manipulation, financial exploitation, and banking and institutional abandonment and racism built these 21st Century neighborhoods, even as we examined the great battles 50 years ago that were heroic without being a turning point and sat among the beautiful architectural and institutional ruins of that time. Contract-for-deed purchases are a way that a seller buys distressed property and then exploits a buyer, a family, almost invariably low-and-moderate income and too often minority, by flipping the property without making repairs while extracting predatory payments at huge premiums almost hoping for a default since there is no equity and a quick eviction process, since there was no actual property transfer, allowing the seller to sell again to another victim or another greedy seller, and keep the cycle going again.

The Contract Buyers League was a campaign, spearheaded by Jack Macnamara, a former Jesuit seminarian then, who sat with us today, and a steady stream of almost eighty college students who did stints in summers and school semesters off-and-on for years as volunteers to staff the research, hit the doors, and help the members put together the weekly Wednesday meetings and constant diet of pickets, actions, and events. Around the table were some of those former students, including by old friends and comrades-in-arms from ACORN, the SEIU, and AFL-CIO Mike Gallagher from Boston and Mark Splain from the Bay Area as well as Jim Devaney, a former volunteer from Cincinnati. A former Black Panther from those days and other community leaders now tried to puzzle out how, with the reemergence of contract-for-deed activity now in the wake of the foreclosure crisis and home lending desert for lower income and working families, we might be able to refashion a Contract Buyers campaign that could work and win now.

It goes without saying that today is different than 50 years ago. Rather than being concentrated in neighborhoods like Lawndale and Austin in Chicago and other cities with large minority populations then, today the victims are spread throughout the metropolitan area. We looked at a sample list of contract buyers acquired by two vulture hedge fund operators and there were few in Chicago itself compared to working class suburbs and developments like Homewood, Hoffman Estates, and Orland Hills. How would we get the density that put hundreds in a room on a weekly basis 50 years ago? Estimates are as high as 7 million families who are under contract-for-deed agreements now nationally, but putting them together wouldn’t be easy. We were all veteran door knockers, but we talked about how to use data files, voter lists, robo-dialers, social media, and other tools to flush out the victims and leverage the public policy and political space to create change.

There’s more work to be done in coming days, but two things kept returning us to the task of today. One was hearing our new friends from these communities where we were meeting talking about how their father’s and grandmothers had bought and raised their families in contract houses. Another woman speculated that the mystery of how her sister had lost her house might have been through a contract-for-deed rip-off, and she left at the end of the day to call her and finally ask. And, then there were the stories of the actions, lawsuits, and even some victories of 50 years ago to continue to remind us that we could only really lose, if we refused to fight this plague once again.