Columbus        An analyst for the Federal Reserve Bank in St. Louis on a panel with us at the Benjamin Hooks Institute at the University of Memphis listened to our remarks about the devastating impact of hedge funds and land installment contract companies in Memphis, and asked me if I had seen the study by the Samuel Dubois Cook Center on Social Equity at Duke University entitled, “The Plunder of Black Wealth in Chicago:  New Findings on the Lasting Toll of Predatory Housing Contracts.”  I hadn’t then, but I have now, and it’s a punch in the gut and a slap against the head for anyone who needs a wakeup about the devastating impact of these predatory rip-offs more than fifty years later which are making a comeback now.

Before I knock you out of your socks too, let me brace you a bit so that you’re sitting down when it comes.  This report is not a rhetorical polemic.  It is based on the Center and its collaborators going through 50,000 land records in Chicago in minute detail including court records and the whole shebang.  The report authors are careful to point out that there conclusions, even after this Herculean effort, are conservative.  In short, what I’m going to share is no back of the envelope baloney to make you hoot and holler with ACORN’s Home Savers’ Campaign for more reform, but hard, cold facts that cannot be contested, but must be addressed.

Here’s what the found in a nutshell:

And, don’t forget, these were installment contracts where a missed payment could – and often did – lead to eviction, so that many of these families, paying a premium and being fleeced from start to finish, never ended up with the wealth that home ownership might have brought them even as they paid the price!  Oh, and this is just the numbers on Chicago, multiply that in urban areas across the Midwest and anywhere in the South and the rest of the country until the FHA stopped redlining in the mid-1970s.

Any doubts about the impact and injustice left or the need still to make families whole to start to close the wealth gap between black and white families in the United States?

I hope not, but here’s one more Gold Seal of approval supporting the truth of these numbers:  one of the collaborators was Jack Macnamara.  They list his name as being connected with Loyola University in Chicago, but that’s window dressing.  Macnamara was the lead organizer of the Contract Buyers’ League in Chicago which turned Chicago upside down around this issue in the late 60s and early 70s.

If Jack says these numbers are right, that’s enough for me.  You can put them on a picket sign and go to the bank with them!

New Orleans        First, the disclaimers.  When a story about an event and a political and activist organization fifty years earlier makes a full page in the New York Times, we must all realize that this is not real news, but heavily processed information through the perspective of the present.  The message is one intended for us now for reasons of theirs, not necessarily ours.  Additionally, when we are talking about the drive for social change and struggles for power in the face of institutional and political opposition, time is erosion, blunting some of the sharpness of action in the fog of nostalgia and the clouds of memory.

Nonetheless, I was heartened to hear that there was a full-page story on the Young Lords, who were well-known in the late 60’s, as I was first beginning my career as an organizer, for the work they were doing in the largely Puerto Rican communities in New York City.  My friend and comrade, Charles Koppelman, sent me a link to the story, assuming that I had already read it, but I was sick as a dog in San Pedro Sula, and didn’t see it until I made it back home and began reading my stack of missed papers.  The story was a great one, “Puerto Rican Activists and the 1969 Garbage Offensive.”

…it was another radical group of Puerto Ricans who finally gave them a sense of how to organize themselves. In Chicago, a former street gang called the Young Lords had recast itself in the mold of the Panthers, with tactics both militant and community-based. The Lords set up a dental clinic and a day care center; their outlook was both global and local. They demanded independence for Puerto Rico and an end to the Vietnam War, and fought for equity in resource allocation, demonstrating at urban renewal meetings. 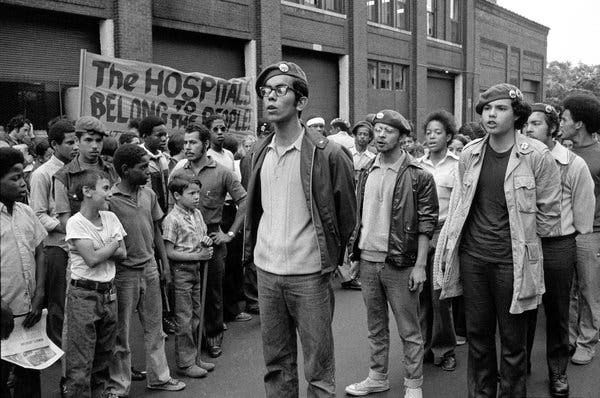 Outside Lincoln Hospital in the South Bronx, members of the Young Lords protesting the neglect of the health care needs of the Latino and African-American communities. Sept. 3, 1970.Credit…John Sotomayor/The New York Times

When they heard of what the Lords were up to in Chicago, [Hiram] Maristany and a few others got in the car, drove to the Midwest, secured permission to start a New York chapter and turned immediately back around to begin organizing.

The first thing they did was hit the streets to ask their neighbors what was needed. Expecting lofty talk of revolution and systemic change, the Lords instead found that the community’s needs were very straightforward. “This place is filthy, man. It stinks. There’s garbage all over,” was the complaint Maristany heard. Sanitation pickups were irregular, and piles of trash accumulated on street corners, fouling the air and presenting a significant health risk. Waste bins were nowhere to be found.

A small contingent of Young Lords went to the local Department of Sanitation office to ask for better service. “We were naïve,” Maristany says. “It’s not a mistake, the way they operate. They provide service to the powerful, the people with political clout, not to us!” They asked for brooms and trash bags so they could do the cleanup themselves. “They threw us out!”

In a 1995 article in The Village Voice, Pablo Guzmán, a founding member of the New York Young Lords, recalled the tenor of the situation. “All we had been trying to do after sweeping up the streets on previous Sundays was talk with Sanitation about once-a-week pickups and nonexistent trash cans, and about how to decently treat people asking for help instead of blowing them off,” he wrote.

As Maristany tells it, the group eventually returned to the sanitation depot and took the cleanup equipment.

“We thought Sanitation would come take the trash away once we’d bagged it all up for them,” he says. “We had bags and bags and bags of trash. We said, ‘You going to come clean this trash up now or what?’ They refused.”

The Young Lords and a handful of community members began dragging rusted refrigerators, old cars, mattresses and busted furniture off the corners and strewing them across Third Avenue near 110th Street. The Garbage Offensive had begun.

It’s worth adding that they beat then Mayor John Lindsey and won regular garbage pickups.  It’s worth reading the story.  It’s not a great organizing story, but it’s a great story of a small, committed group of activists who were, importantly, willing to listen, and because of that could select an issue that mattered to the entire community and gave them real support and a platform for change.

A side note on my original disclaimer that even so we need to take some of this with a grain of salt, even though it is former participants doing the talking.  The subhead on the print addition was: “Hoping for a revolution, the Young Lords found that the needs of their community were more immediate.”  The subhead in the on-line version was “Fifty years ago, the Young Lords evolved from a street gang to a political force.”   History is written by the big winners, so that their message remains, even when it has to do with us winning a battle here and there.