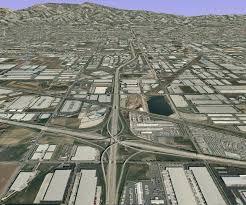 San Francisco     The Inland Empire is largely Riverside and San Bernardino Counties in southern California east of Los Angeles.  Warehouses and distribution centers are the kings of this empire, workers and communities are too often the serfs and poor villagers.  In the last decade since the Great Recession new work in this section brought in 84,000 jobs, nearly a quarter of the region’s employment, averaging a little more than $15 per hour for a workforce population where 45% have no more than a high school education.  Amazon with a dozen warehouses in the area now is the largest Inland employer.

A community fight has now become public over a proposal to build a $200 million air cargo facility that claims it would eventually create 3800 jobs and deliver $6.5 million in revenue for a public airport on the repurposed site of a former Air Force base.  What’s the rub?  Community organizations such as Inland Congregations United for Change, part of the Faith in Action network (formerly PICO), want the guarantee of a community benefit agreement. Unions, like the Teamsters who represent many warehouse workers, want organizing neutrality to prevent wage erosion for their members.  Many elected officials want transparency on the incentive deals and negotiations for the highly secretive companies, including Amazon notorious for its additional headquarters search and its efforts to extract billions in tax breaks from New York City, and Google which has done the same for its server farms in scores of secretive deals around the country.

An article in the San Francisco Chronicle made it clear that despite all of the claims by the economic development and local officials, the community and unions are not opposing the project, but they are clear that they want real guarantees on job quality and community benefits, none of which are being assured them at this point.  State legislators have proposed bills on a variety of these matters.  One measure that has passed the state Assembly and is pending before the Senate would require any warehouse receiving more than $100,000 from local governments to at least be transparent about the number of jobs, wages, and other employment plans.  Another also moving forward would mandate public hearings annually on such incentive deals and whether or not they really deliver and, importantly, demand clawbacks if the job development and similar commitments are not fulfilled.  Similar bills were vetoed by former government Jerry Brown, but may have a better chance now in the changing environment on tax giveaways without any accountability.

Another issue, similar to the one where ACORN and our Walmart organizing project worked with the Teamsters and others in trying to win accountability in Merced, California when a huge Walmart distribution center was being built, is the environmental impact of thousands of diesel trucks coming through and polluting lower income neighborhoods, and in that case students at the new university location in Merced.  Similar concerns are being raised here about “diesel death traps,” and part of the controversy has been the quiet around the environmental impact statement done and released without any local attention in order to avoid public participation.

These fights are breaking out all over the country exploding the economic development hype about “low road” projects without community and worker benefit agreements.  Add the Inland Empire to any list of these battlegrounds, since warehouse and distribution centers are now front and center in the dispute.

New Orleans  Big news in New Orleans, a city that decidedly does NOT specialize in irony, surrounds the Mayor of the Katrina years, C. Ray Nagin and whether or not in addition to being incompetent, which is widely acknowledged, he was also corrupt.  The irony comes into play because speculation in the U.S. Attorney’s office, fully reported in the Times-Picayune, is the chances of his conviction on charges likely to be filed at the end of January may turn on his adamant refusal to agree to a “community benefits agreement.”  This is all too, too rich!

Community benefit agreements (CBAs) have become an important part of community organizing in recent years as a strategy to force so-called economic development projects, which are often merely tax giveaways to corporations and the favored few, to actually deliver benefits to residents of the neighborhood and city where they are locating.  In the Nagin-New Orleans case, this situation arose around locating a Home Depot megastore on a pretty bombed out section of Claiborne Avenue in the uptown part of the city.  This was not big time news of a deeply seated community-based struggle as so many of fights are, but largely a political maneuver by a local city councilwoman, often a pain in the Mayor and many other sides, who wanted to hang a community benefits trophy on her wall, which suits me just fine for whatever the reasons, since New Orleans folks would actually get more.  The paper reported in excruciating detail, since all the parties have had to give “secret” testimony to the grand jury and the US Attorney’s office is an information sieve, that the word from Mayor Nagin had come down that in no uncertain terms, he was opposed to the CBA.  In fact there is now a voice mail recording of a call to the Atlanta-based CEO from Mayor Nagin offering to help squelch any community opposition to green light the project.  All of the behind the scenes players folded their tents quickly, since there was no deep community campaign to make the process transparent or forceful, Home Depot got their site and a tax break, and it was business as usual in New Orleans, as it would have been for most cities around the country.

Except for the fact, and the irony is now becoming clearer, that Nagin and his family ended up soon after with a contract to supply stone to Home Depot.  The US Attorney’s case though is anything but airtight, despite having turned several potential witnesses against Nagin.  They now feel if they go to a jury their best chance at a conviction may rest on moving the jury that Nagin’s opposition to the CBA, when it would have meant higher wages and local jobs in the community, will persuade them that there must have been a corrupt motive to Nagin’s opposition to the CBA.

Let that word spread the land!  It is not a matter that Nagin and 95% of all big city majors are so desperate for big box stores that they will give their right arms for any to come around (see all of the Walmart giveaways everyday!), but it is a prima facie case of corruption if they don’t agree to a community benefits agreement!

If Nagin goes down, this could mean 1000’s of community benefit agreements are now suddenly possible!  Clearly they benefit the citizens, so why wouldn’t mayors all agree with the community and negotiate for more?  Nagin may go to jail, but his contribution in fighting against community benefits, could be a huge shift away from neoliberal corporatism in American’s cities!