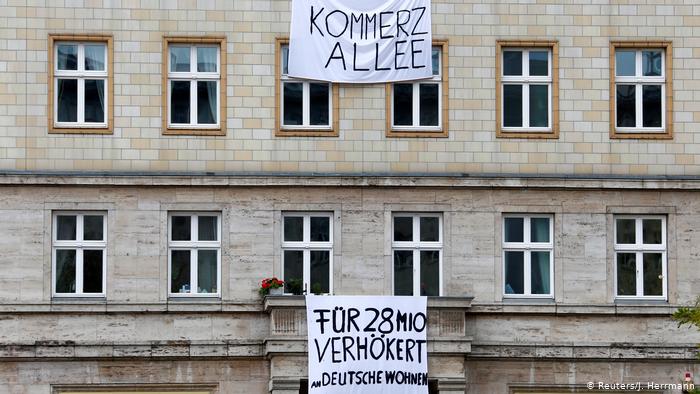 (Reuters/J. Herrmann)
“Commerce alley” and “hawked for $28 million” by property giants: Berlin’s rising rents have many very afraid of affording their rent or losing their homes

Chicago    When affordable housing is in the headlines, it’s a safe bet that it is not prompted by a concern for low-and-moderate income families, but maybe we can take a lemon and make it lemonade, as activists are doing in many cities.

Berlin, Germany, might be the sharp point of the spear.  There tenant advocates are collecting signatures for a ballot proposal that would force the city to expropriate all private, for profit landlords that own more than 3000 apartments.  According to reports, the Berlin mayor has also proposed buying around 50,000 apartments from private owners and his party wants to freeze rents over the next five years.  Germany has a unique system of contracting with private landlords to provide housing for lower income families on extensive multi-year contracts rather than building more public housing as sort of a different twist on Section 8 housing subsidies in the United States.  Nonetheless, taking such units over totally would be huge.  Large landlord combines, as we found in Frankfurt several months ago, are often beneficiaries of so-called public-private partnerships which contract with these rental conglomerates in Germany to build and then manage the units making their size and operations increasing controversial.

The lack of a national housing program or much of a local one complicates the response in the United States.  An easily observed irony that is depleting the construction of affordable housing in many cities is the double standard allowed for AirBnb in commercial rental complexes as opposed to neighborhoods, making some condo and luxury apartment construction projects mini-hotels when they are not able to price their units to sell on the market, the AirBnb loopholes balance their books and fuel more of the same faux market-rate development.  This is easily observed in New Orleans and many other cities.

Meanwhile in Germany the effort to collect 170,000 signatures is ongoing.  The ballot initiative would not be binding, but would state public interest clearly, and that is worrying builders and others.  Perhaps this is the kind of message we need to send everywhere in order to finally force some real attention to the issue and programs that deliver mass solutions for affordable and decent housing.