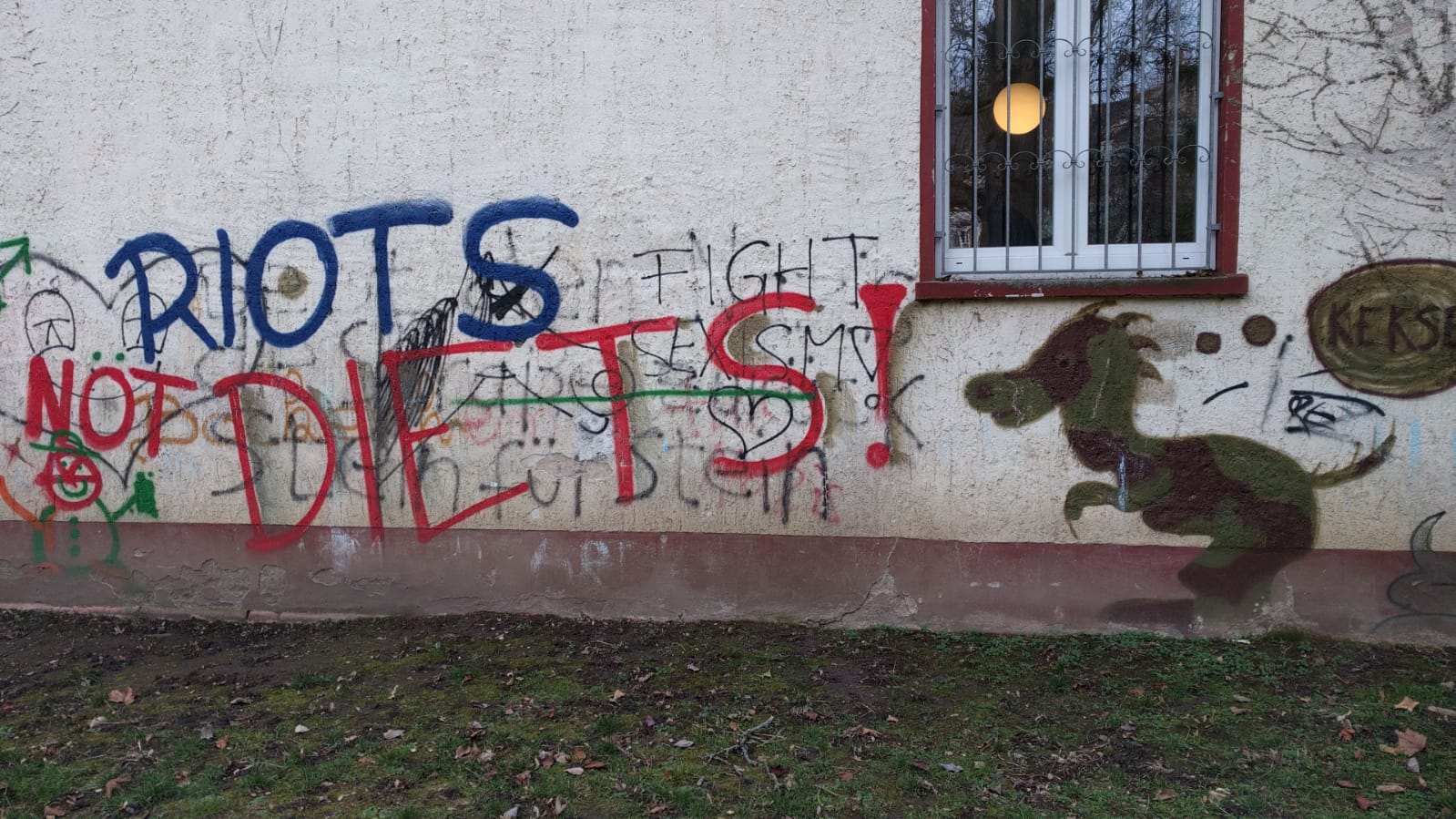 Frankfurt     The organizing workshop for more than a half-dozen activists from Frankfurt, Munster, and Bremen was all about the basics in the morning and early afternoon. What is ACORN, and what do we do?  How does the ACORN Model work and what are its elements?  What is the structure of a doorknocking rap or home visit, then some role-playing in teams to become more comfortable, underling the point that practice makes perfect?  All of that was invaluable to the team and engaged them fully.

At one of the breaks one of the folks asked me how many times I had done this workshop?  I didn’t have a quick answer.  They asked if it was thousands?  Certainly not.  Maybe a couple of hundred?  Every time seems different and unique to the people trying to learn, so they don’t fit the memory in the same way.   And, of course there are all of the times other ACORN organizers, leaders, and trainers did the same basic workshop with their own spins and inflections, just as I do mine, which must be thousands.  It was great to hear Robert Maruschke, the community organizing specialist in Germany now working for the left party, Die Linke, tell me that he uses a quote from the ACORN Model about the need for a plan in all of his workshops and training sessions, also helping keep that 46-year old document relevant today with a hard-thumping heartbeat!

After the role-playing and a brief break, then it got more interesting for me as we moved into a long stretch dedicated to various questions they had and some that they had been debating for a while.  Given that English is a mandatory subject in German schools and many of those in the room had also gone to university, they spoke beautifully, so I was surprised when one of the early questions asked me to define the word, “rap,” because many for a long time had thought I was saying “wrap.”  That was the easiest one that came my way, thanks to a generation of rap singers and the worldwide phenomena of that distinctive American-bred musical expression.  Others mentioned weird translations in the documentary, “The Organizer,” where power was often translated as electricity, tipping off because giving a tip, among other moments of hilarity they had discovered.

I got on a tangent as we talked about campaigns.  In several of the cities where they had begun to engage tenants, they had ended up tangling horns with the German housing giant, Vonovia, Germany’s largest residential property company.  These efforts are small and isolated, but at one-point Vonovia had whined publicly about pressure from tenants and others about its work, and threatened to stop investing in housing in Germany and move its developments to Sweden, where they claimed they would be more appreciated.  I gave them examples of bootstrapping very local campaigns nationally, from the early 1970s ACORN campaign to downsize Entergy’s White Bluff coal-fired energy plant by engaging their top investors at Harvard, Princeton, and Yale.  Why not reach out to housing and tenant allies in Sweden and have them loudly proclaim that Vonovia was unwelcome there unless it did a better job in Germany?  The same tactic could be used in having organizations in cities declare Amazon as unwelcome based on its bullying in New York City as it tries to extort more tax exemptions.

What’s exciting about tactics in big and small campaigns, is the opportunity to bootstrap them wherever needed to turn up the pressure on the target.  It’s always fun to find myself in a conversation that veers in that direction.

Frankfurt         Spending some time walking around Rodelheim, a working-class neighborhood in Frankfurt, with tenant activists was an on the ground master’s course in tenant rights and landlord power in Germany.  The area is not gentrified exactly, but it is easy to see new developments coming in that could tip the scales dramatically.

Having just looked at renovictions and demovictions in British Columbia, I was full of questions as we walked passed numbers renovation projects in 4 and 5 story apartment buildings.  75% of Germans are tenants, so in areas like Rodelheim a single-family house is an unknown quantity and even the smallest houses are two and four family operations.  Demovictions, where properties are demolished and tenants evicted are rare here, I was told.  When we saw something coming up from the ground as new construction, it was after an old building had essentially collapsed and become inhabitable.

Renovictions were more commons, but there was a very different, very German twist.  The rehabs were ostensibly being done on older post-war buildings to make them greener and more environmentally sound, essentially creating an air zone to insulate the buildings better along with other upgrades.

Tenants were not exactly evicted.  In fact, tenants have permanent security of tenure in Germany.  There are no leases.  Once a tenant is in the flat, they can stay forever except for certain conditions like repeated nonpayment or engaging in criminal activity on the property.  The tenant almost gains an entitlement to the apartment.  Landlords, through their real estate owners’ association, have managed to take advantage of these tenants’ right in a costly way.  The modernization law allows them the option, which most gleefully exercise, of passing on the cost of the renovations with an increase in the rent to pay for the work over a period of years.  Every three years, landlords already have the right to exercise an option to raise the rent by up to 15%.  They can add on this modernization charte as well.  Because of this law within ten years most tenants will have collectively paid for the renovations.  Within twenty years, as these excess payments accumulate, the landlord will do even better since they can simply bank those increased rents.

The building where I’m staying in a spare room is a good example.  There are renovations ongoing on the outside cladding as well as on the elevators and so forth.  Some 40%, if I heard right, of the tenants have already left in anticipation of being assessed the increased cost of the renovations.  They were not evicted, but they read the writing, literally, on their walls.

The tenants have not been able to stop the rent increases that are coming, even though this big tower block is owned by a scientific foundation.  They have won noise abatement breaks in the construction of a half hour early in the day and in the afternoon and an hour around midday.  That is an unusual, but significant victory that may prevent the noise from chasing some tenants away, although the renovation pass-through to the tenants may be more effective in gentrifying the building.