Wikipedia calls Milam an author and activist, which is true as far as it goes, but in many circles, he was seen almost as the father of community radio, and in that sense we all are indebted to him and pay the debts on a daily basis.  The Wikipedia entry credits Milam with founding fourteen listener-supported stations “from the early 60’s to the late 70’s,” but I’m sure that vastly understates the number of stations his advocacy and assistance spurred onto the airwaves.

I knew Lorenzo then, so I know what I’m talking about.  The first ACORN organizers who opened our offices in late 1975 in Dallas and Fort Worth were Meg Campbell and Steve Holt.  Lorenzo’s “experiment,” as he called it, of starting a noncommercial station, KCHU in Dallas at top dollar, rather than the usual chicken scratch of bailing wire, duct tape, and used equipment, was also new.  ACORN had a weekly show on the air.  Meg and Steve kept lobbying me to meet Lorenzo the next time I was in Dallas.  He was having trouble herding the cats, a common problem in those wild times with an all-volunteer crew.  He had been impressed with how well organized they were and had gingerly broached with them the possibly of helping run the station.  I finally agreed to meet him after we won the lifeline utility rates election in Little Rock, but that I realized might be a fluke when we watched Middle South Utilities (now Entergy) drop hundreds of thousands in radio and TV ads against us in the last two weeks of  the campaign.  Maybe if we could organize our own radio stations, we could create a voice for our people.

Lorenzo was a tireless promoter of the potential and power of community, noncommercial radio.  He wanted to know where else ACORN worked. We were interested in a Little Rock station, so he had his engineer and buddy, Jeremy Lansman, do some research that uncovered the potential for a 100,000-watt station there.  He pointed the way, and we ran with it, until we were finally on the air in 1984 with KABF, now 36 years ago.  Reading that he passed away in Oaxaca, Mexico, only weeks before his 87th birthday, I now realize that he must have been in his mid-40s when we met.

Before KABF was on the air, he realized we were organizing in Tampa-St. Pete.  He told me there was a guy with a construction permit close to expiring.  Perhaps, we could take over the CP, get an extension, and save the license.  Dewey Armstrong, then head organizer in Florida, and I drove from Miami late one night and found the guy on the beach in St. Pete waiting for his girlfriend to finish a shift at a diner.  He agreed to let us run the license, and within several years we put WMNF on the air.

Lorenzo’s plan for us to take over the KCHU fell apart in a vote by DJs, and the station went dark.  More than six months later, Terry Andrews, the regional organizer for ACORN Dallas, and I bogarted our seats on the board into a majority of our appointees, and put the station back on the air as KNON, still booming now.  By that time Lorenzo had washed his hands of the stations, but I knew he knew.

After more than thirty years with only sporadic contact, once when he was living along the beach in San Diego and we were organizing there, and he was moving to Tijuana, I was able to get his coordinates when speaking to a community broadcasting annual meeting in Portland a couple of years ago.  I tracked him down via email, and offered him a report on Dallas, Tampa, Little Rock, New Orleans and other stations in Africa.  He replied in a brief but inimitable, elegant, and courteous manner.  Several weeks later in response to my having asked what he was up to, a boxed set of his RALPH books showed up in my mail.  RALPH stands for Review of Arts, Literature, Philosophy, and the Humanities.

Typical, Lorenzo.  The stories that could – and should – be told are endless.  He was both special and, truly, one of a kind.  He pointed out the path, and then stepped aside.  You sunk or swam.  Either way, we could only thank him by staying on the air as the “voice of the people,” and keeping the dream alive.  Lorenzo Milam has been missed, but his mission endures.  We join many others in both remembering and making sure that it stays evergreen.

Little Rock      JT Tarpley approached us out of the blue three years ago with a wild and crazy idea.  He wanted to make a documentary about KABF, our 100,000-watt noncommercial radio station broadcasting throughout central Arkansas.  This was during the time of troubles in the wake of the mind-blowing election of Donald Trump to the presidency turning so many people’s world upside down.  Tarpley’s notion was that he would tell the story of the resistance, if you will, through the lens of a foundational community institution, KABF.

How in the world would he manage that?  We didn’t know, but of course we said, yes, what did we have to lose?  It was a documentary after all.  Many are called, and few are completed, so what’s to worry.  The ACORN documentary, “The Organizer” drug on for eight years.  JT swore his would be different.  He was going to do it on a shoestring, and he was going to do it quickly.  Famous last words.

We heard from him last year.  Would a couple of us be willing to take a look at what he had been doing the last two years?  Ok, sure.  He then told me it was 180 minutes long.  Holy-moly!  We’ll watch some of it, but….  So, Toney Orr, KABF’s board chairmen, and John Cain, the program director, and me sat down with him and watched a bit on a busy day.  Our advice?  What did we know?  He had some interesting stuff, but it was just too long.  JT said he wanted to keep it all.  Ok, good luck. 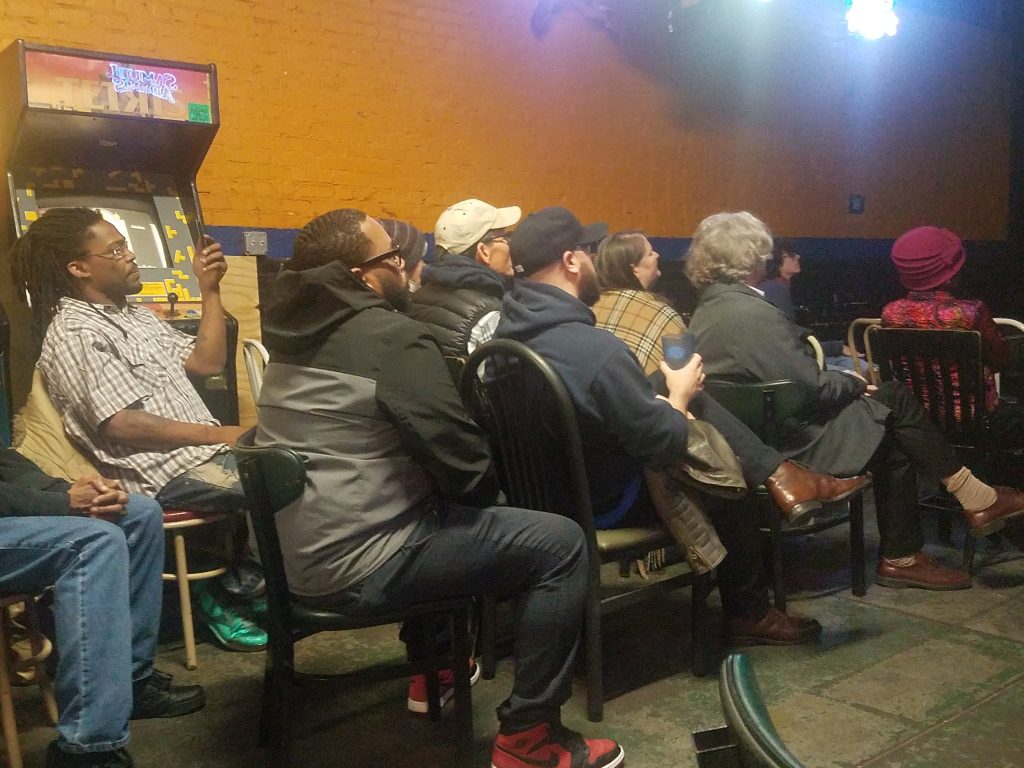 A week ago, he reached out.  The documentary now had a name: “88.3 FM – The Voice of the People.”  It was down to 100 minutes, and darned close to finished.  He wanted to know when I was next in Little Rock to see if we could do a “sneak preview” screening for KABF hosts and friends.  What the heck, sure, that was going to be a hella-day anyway with stops in Greenville and Drew, Mississippi, but I could be there by 630 PM in Vino’s back room.

We had a good, solid crowd of thirty or more, mostly KABF hosts.  And, lo and behold, I’ll be honest, to my surprise, it was a great documentary on the station!  Good camera work.  Parts of it were actually funny, which captures the true heart of KABF.  The diversity of the programming – and its hosts – old and young, black, white and Latino, came through clearly.  Ok, it was still too long.  Some pieces were ten minutes that should have been two, like the King march.  Too many speeches without enough connection to the main themes in the women’s march and the school closings, but, hey, that’s just a matter of tightening everything down.

Props to JT Tarpley for a crazy idea and for making it happen.  I’m biased, but my verdict as a now experienced documentary veteran, is that once this is at a festival near you, or anywhere you can get your hands on it, grab a copy or a chair and enjoy.  Then, throw a couple of dollars towards Tarpley so he can get it finished and always remember to show some love to KABF and become a member and jump for your wallet during pledge drives.