Tunis     The Organizer’s Forum delegation, coming from Canada, the United States, Italy, France, Kenya, and Cameroon, began the morning, appropriately, with a briefing on the developments in Tunisia since the Arab Spring.  A large Organizers’ Forum delegation had visited Egypt within the first year of the revolution, but we were disappointed to see the revolution slipping through the peoples’ fingers, so now we had open ears and skeptical minds, filled with hope.

The leaders of the Jasmine Foundation began our day with a briefing that was outstanding in providing context for these developments.  The co-founders, Dr. Tasnim Chirchi, and Intissar Kheriji, who are also our partners in building community organizations in Tunisia, gave us an encouraging through frank appraisal. 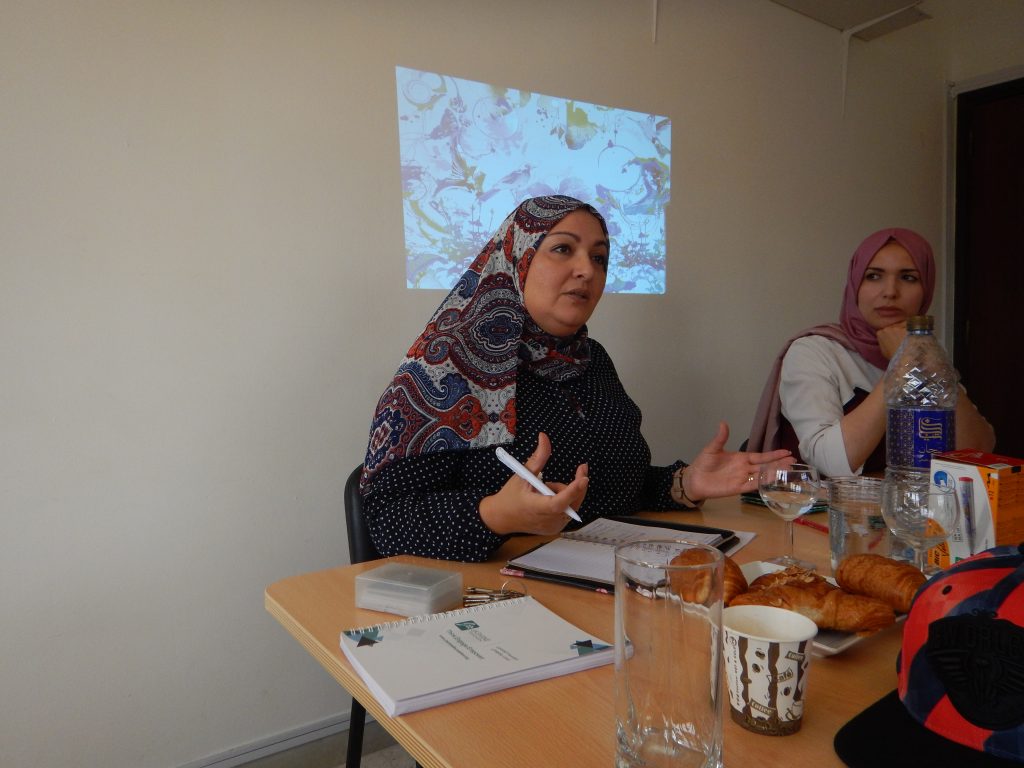 After so many years of watching the contentious interpretations of the Constitution in the United States, it was almost exhilarating to hear our colleagues report on the process of writing the constitution in Tunisia.   Reacting to the fall of the dictatorship there was huge emphasis on participatory democracy and weighing the voices of all sectors of the society, including the rural areas of the country that had triggered the revolution, but were often marginalized in practice.  The commitment to inclusion was carried out as well in insistence of equal representation of women for example in the Parliament. 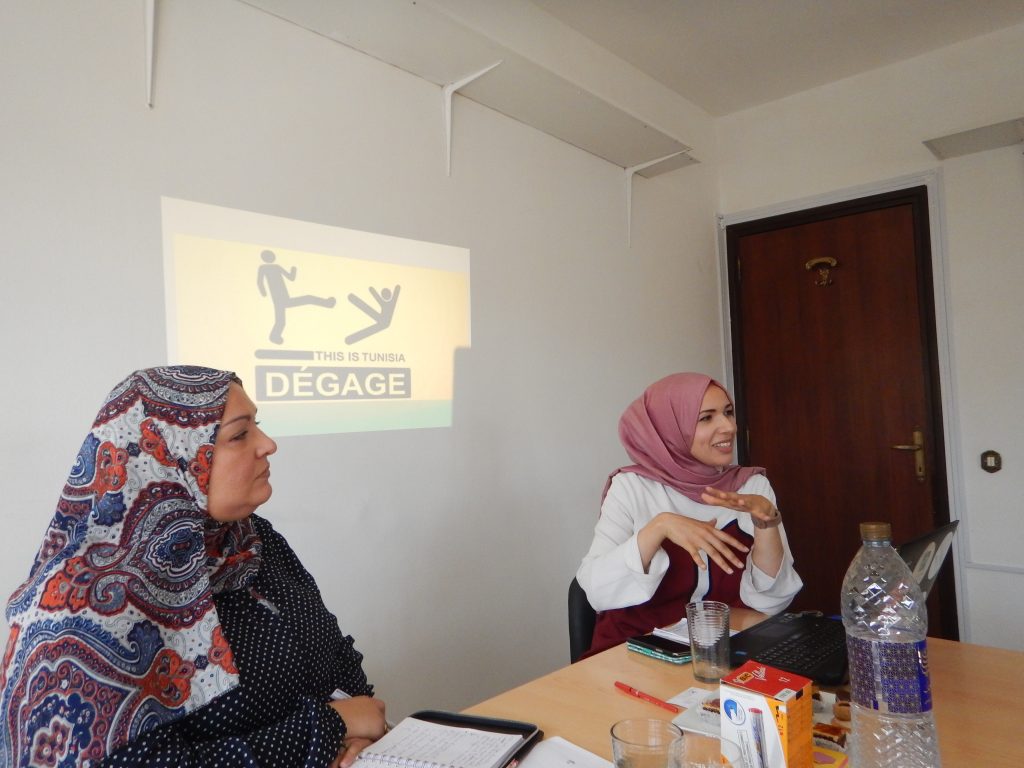 Devolution was critical to the process since until 2011 so much of government under the dictatorship was strictly top-down from the central government.  The constitution gave new powers to local municipalities and opened the way to municipal elections for the first time.  Similarly, where there had been one party rule for so long, the new constitution also created an internal checks-and-balance system that prevented any one party from dominating the parliament, essentially forcing there to be coalition governments.  The first legislative elections were dominated by an Islamic party, but they were moderated in coalition.  The second was won by a more progressive party, but they also were forced into a coalition.

We could see some of the impacts of these changes on the streets of Tunis.  The first night we arrived the debates were being televised on a huge screen along the central boulevard at full volume.  Our friends reported that more than three million watched the debates.  There are twenty-six candidates for the office despite the fact that it is less powerful that the prime minister, and those had been winnowed from an initial list of ninety-eight.  There are many differences of opinion expressed, including some that openly campaign for a rollback of the Revolution so that things could be as they are.  Our speakers argued that was an example of the openness in society now, because even the reactionaries were forced to declare themselves in public. 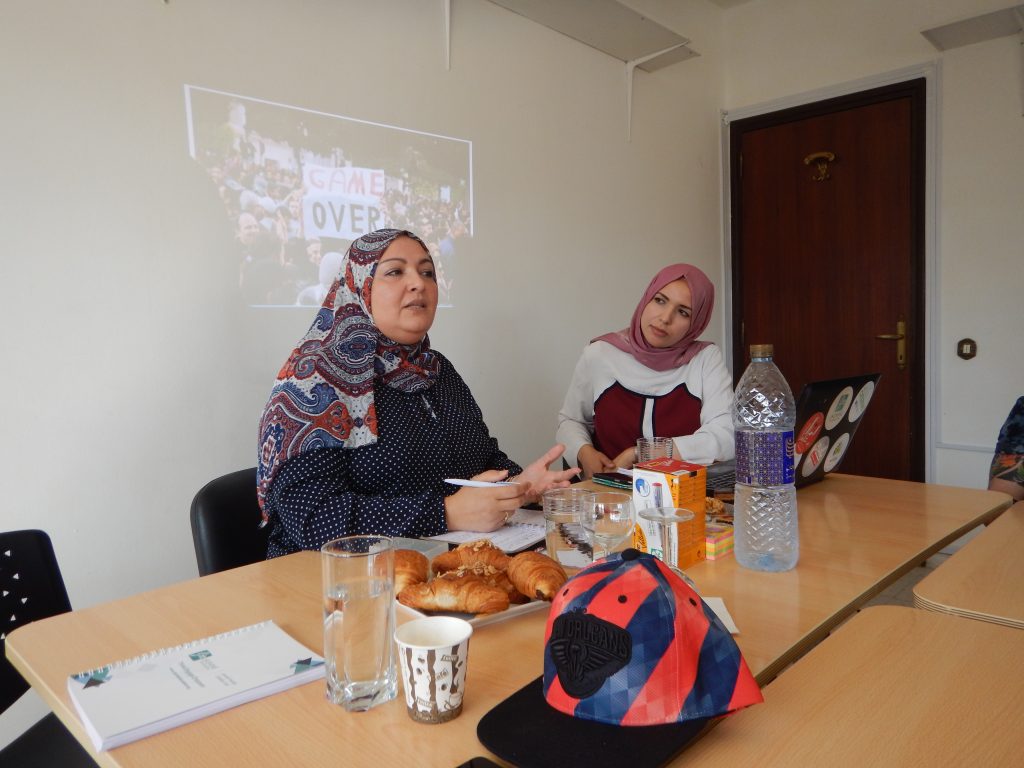 Of course, they noted that implementation was not as robust as the process of writing the constitution post-revolution.  As always, there is much work to be done, but nongovernmental organizations have soared to 25,000 in the wake of the revolution from only a couple of hundred before 2011, so there are plenty of organizations playing the role of watchdog.

We’re crossing our fingers and rooting for all of the warriors for democracy! Casablanca   The Organizers Forum delegation learned a lot about the problem of workers and their organizations when we met with an organizing director from the UMT, the Moroccan Workers Union or Union Morocaine de Travail as well as several activists with the UMT at ST Electronics. The UMT is the largest union in Morocco with about 300,000 members and has not been afraid to try to organize some of the workers in industries that have off-sourced to Morocco like call centers and micro-electronics, but even in the stories of victories, it was clear to all of us that this has not been an easy road.

Members of our delegation through our partner ReAct had worked on some of the call center organizing drives and supported campaigns linking plants in France, Italy, and Malaysia with the ST Electronics plant in Morocco, so we were especially interested in these discussions and could celebrate some of the progress where they had participated. Nonetheless, Ayoub Saoud from the UMT was frank with us in describing the difficulties, especially in the call centers. The UMT estimated that there are now 70,000 workers in this sector, many of them young and women. Turnover is high at 80%, making it difficult to stabilize the union as well. Much of the Moroccan labor code involving unions seemed to match and be based on the French rules for unions for both good and evil. A vote of 35% can give a union the right to force bargaining with the employer. Other voting percentages allow the union to be able to elect delegates. In the organizing campaigns in call centers the UMT has been able to elect 120 delegates from what we were told with 20,000 workers at different times voting for the union. At the same time when we asked what the UMT membership was in call centers, we couldn’t believe our ears and asked repeatedly for clarification when Saoud reported that they only had 100 dues-paying members in call centers. The simple math would indicate that even some of their elected union delegates are not even paying dues. It is hard to imagine that these organizing drives can be sustainable, and it also became evident in the discussion that call center work was already deserting both Morocco and Tunisia for even cheaper locations in Madagascar and Senegal. ST Electronics has a huge 7000-worker plant in Grenoble, France, where ACORN’s affiliate Alliance Citoyenne was founded and where ReAct began its work when ST Electronics threatened the CMT local that it would downsize the plant. Two activists and leaders from the plant joined us and told the inspiring story of their organizing efforts in the company and the company’s retaliation when they fired a dozen leaders. The firing promoted a strike. A short video produced by ReAct’s Emma Saunders showed the workers routing the company’s security workers and their dogs. The workers were able to win recognition and reinstatement, and a number of improvements in their wages and working conditions.

We rose in applause and ended on a high note, but at the same time we all recognized that unions are beleaguered in Morocco with little support and massive challenges among formal workers, and a job still to be done with informal workers that dominate the economy.