Baton Rouge     Two advance men showed up on Thursday to start vetting locations and activities for President Clinton’s visit to Baton Rouge to help spur participation for eligible families in the earned income tax credit (EITC) program, announce the grant of $250,000 to the ACORN Tax Access Centers and applaud their work in the ten Katrina evacuee cities where the mobile units and ATAC was working.  Marie Hurt of Louisiana ACORN was on point, and Jeff Karlson, national director of the ACORN Tax and Benefit Access Centers, were tearing their hair as the locations bounced from Baker to Baton Rouge to here and there from this time to that.  But, finally the plan shaped up and it appeared that President Clinton was going to arrive at the Scotlandville Middle School for a series of events mid-Sunday afternoon.  There would be a small rally in the gym.  There would be a brief meeting with the ACORN people before the announcement.

Clinton sent word that he wanted to be introduced by ACORN’s founder, so there was no escaping the call.  He knew me from back in the day, so if he was calling my number, it had to be answered.  Plane reservations from New York City were changed, and shortly after noon I was rolling towards Baton Rouge.

Driving towards the airport exit near Scotlandville my cell rang with a directions adjustment and the report that Clinton was going to be early.  I said if there was anything I knew about anything, Clinton was not going to be early!   On time, maybe; early, never!  He had been in Little Rock the day before and reports from Zach Polett, ACORN’s Political Director, indicated that everything had gone extremely well there.  This was not hard work, but it was good work.

The Scotlandville location was minutes from the airport, but its real value was that it was in the heart of a historic African-American area in Baton Rouge and it had been opened up to school 700 students in the fall who were New Orleans evacuees.  I waited with East Baton Rouge Superintendent of Schools and the principal of the evacuee school.  The superintendent and I talked about Local 100’s BRASE unit and the number of times she had met with our support workers in the hall at Greenwell Springs.

President Clinton finally pulled up.  He nodded through the closed window while taking off his glasses from something he had been reading.  He stepped out of the van and said, “Hi, Wade,” as if it were 35 years ago and he was walking into my office in Little Rock, but then he said, “well finally you have some grey hair!”  We joked.  He followed all of us into a separate room and shook hands with Frenzella Johnson, Lanny Roy, and other Louisiana ACORN leaders, along with Jeff Karlson.  He leaned against the wall in the anteroom.  Perhaps his back was hurting.  He rocked back and forth.  He looked healthy, but carried himself older.  We chatted about the program and how much both ACORN and the Clinton Foundation were excited about the program.

He was then ushered into a classroom by the advance of the Secret Service in order to meet Congressman Richard Baker (R-La) briefly.  After ten minutes he walked back and turned his head behind him saying he couldn’t promise anything but he would see what he could do.  Baker walked past us minutes later to go out the back way out of sight of the press and the gathering crowd.

Clinton grilled me about the merits of the Blanco versus Baker plan as we walked towards the gym.  We promised to get him a synopsis within 24 hours.  He was still engaged in every issue, and as the door opened to the gym and we walked up to the auditorium stage, the lights went on.

The Superintendent opened the rally with short remarks about the school and standing up for the evacuees, and then introduced me to introduce President Clinton.

I thanked everyone and said that I didn’t get the opportunity to introduce a President of the United States very often, and in this case it was a little confusing.  This is a former president of the United States and one has to accord respect to that office, but I’ve known this guy for 35 years and can still remember having to say, “Bill, get your feet off my desk!” when he would come over to visit.  Back then he was working for the McGovern campaign in Texas and was trying to convince me to take a leave from ACORN and work on the campaign on voter registration in the south.  I turned him down then — Clinton then cracked that I did the right thing, and the crowd laughed with all of us — I said that back then he and I both knew the right thing to do, but it’s taken us 35 years of hard work to do the right thing — I worked from the bottom and he worked from the very top, and now we were very happy to be meeting in the middle to work here on getting money to low income workers and especially Katrina evacuees.

I said a couple of other short sentences about the grant being important and then turned it over to the Bill Clinton, former President of the United States.

Bill was graceful.  He made the point that it was nice to see friends that went back 35 years and that there were things we could remember that no one else could even imagine.  He made a point about the youth of the crowd.  He then said something very moving about his regard for ACORN and its signal place in the country fighting for social change.  I hope someone caught it on tape.  I wouldn’t want to paraphrase it with any justice.

In a second Clinton switched gears and became President again and went over chapter and verse of the EITC program, the 2 million children it had brought out of poverty during his 8-years, and the challenge to get the 25% eligible families into the program.   The camera lights were hot in the auditorium as I stood next to him.  He was animated and we were all young and fighting again.

As he finished, I asked him to recognize the ACORN people in the crowd.  He asked them to stand for applause and then in a masterful press stroke, he told them to hold their signs up and point the phone # towards the camera to call for tax help.

We shook hands and I walked off the stage.  I looked back as people crowded all around him to shake his hand and have pictures taken with him.  He made his way through the scrum of cameras and well-wishers.

I promised his staff we would get back to him ASAP, and I lobbied for him to come to visit the neighborhoods in New Orleans with us when he and ol’ George Bush came down for the Tulane commencement.

The ACORN Mobile Action Center was parked in the front driveway of the school as I walked to my truck and answered questions about the back filings of EITC money that you could get.  Then I turned the key and drove back to New Orleans through the Baton Rouge traffic. 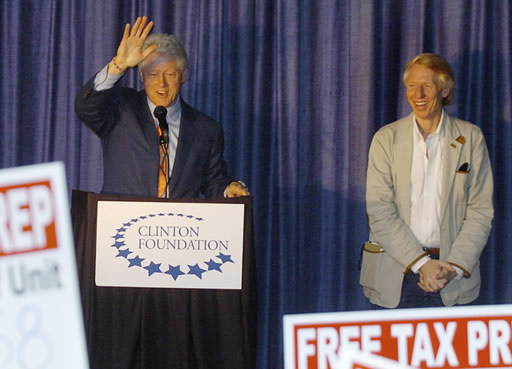