Vancouver     It is hard to reconcile all of the bits and pieces of information that seem to prove little more than the fact that the world is hurtling in different directions.  Take these clues as indications:

And, so does the Times, when it’s one of their own or when they are paying attention to the goings and comings of the close to 9 million millionaires in their fan base.

And, finally, from the sports pages a line that ran in all of the papers commenting on the Miami Heat’s victory over the Dallas Mavericks, “Where there’s a wade, there’s a will.”

Love that one and believe it with all my heart! 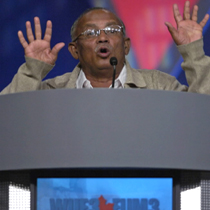 Jockin Arputham, head of Slum Dwellers International based in Mumbai