Atlanta       All of us against all of them, full body no holds barred throw down in Chicago.  ACORN, labor, some churches in front with Brennan Center in back against Wal-Mart, Home Depot, and other big boxes with Mayor Daley in back.  Round by round a bruiser.  Madeline Talbott, Chicago ACORN head organizer, told me the day before we would win if the vote was late in day, because every morning they knocked us on our butts, but we usually recovered and were back ahead by midday.

The vote was late in the afternoon and was a veto proof victory: 34-15.  We administered a butt whipping in the windy city!

More on this later, but read Eric Eckholm’s front page piece in the Times for now:

After months of fevered lobbying and bitter debate, the Chicago City Council passed a groundbreaking ordinance yesterday requiring “big box” stores, like Wal-Mart and Home Depot, to pay a minimum wage of $10 an hour by 2010, along with at least $3 an hour worth of benefits.

The ordinance, imposing the requirement on stores that occupy more than 90,000 square feet and are part of companies grossing more than $1 billion annually, would be the first in the country to single out large retailers for wage rules.

A gallery packed with supporters of the bill broke into cheers as the measure passed, by a vote of 35 to 14, after four hours of intense speeches and debate.

“This is a great day for the working men and women of Chicago,” said Alderman Joseph A. Moore, the measure’s chief sponsor. Mr. Moore said he had had inquiries about the ordinance from officials in several other cities.

An Illinois retailers’ group said it would challenge the measure in court, and Mayor Richard M. Daley, who opposed the measure, has not said whether he will veto it.

Wal-Mart’s response to the Council’s action was swift and blunt.

“It’s sad — this puts politics ahead of working men and women,” John Simley, a Wal-Mart spokesman, said in a telephone interview. “It means that Chicago is closed to business.”

Wal-Mart will still open its nearly completed branch on Chicago’s West Side in September — the company’s first store in the city — but any future plans “will likely change,” Mr. Simley said.

In arguing that Wal-Mart and other companies can easily afford to meet the new standards, proponents of the measure pointed to Costco, which says it already pays at least $10 an hour plus benefits to starting workers around the country.

In existing stores in the Chicago area, Wal-Mart pays entry-level wages of about $7.25 an hour but its average pay is $11 an hour, a company spokesman told The Chicago Tribune. The company has not revealed details of its benefits.

With this ordinance, Chicago has opened a contentious front in the growing national movement, led by labor and poverty groups, to raise the incomes of bottom-rung workers through local minimum wage and “living wage” legislation. Some economists say such measures will stifle development and deprive consumers of access to cheap goods, but many poverty experts say that local efforts elsewhere to raise wages have not choked off growth and that the expanding, low-paying retail sector can be safely pressed to raise pay.

“We’re very confident that retailers want and need to be in Chicago, and the question for the city is what kinds of jobs they will bring,” said Annette Bernhardt of the Brennan Center for Justice at the New York University Law School, which helped draft the Chicago bill and has done economic studies of its likely impact.

The Illinois Retail Merchants Association condemned the measure as likely to hamper job creation and a form of illegal discrimination, and said it would challenge it in court.

Mayor Daley said earlier that the ordinance could impede growth and tax revenues. He did not say yesterday whether he would veto it, but he would have to persuade two aldermen to switch their votes to avoid an override.

Some politicians and residents in neighborhoods where new Wal-Mart, Target or Home Depot stores are planned also spoke out against the measure, fearing a loss of jobs, and leaders of black churches dueled over the benefits and risks.

The bill was the object of a fierce lobbying battle over recent months, with unions and community groups flooding aldermen with petitions, post cards and telephone calls and retailers doing the same.

In a meeting with several black aldermen, Target officials warned that passage of the measure could cause the company to cancel or delay three stores planned for the city’s South Side, the aldermen told reporters.

Yet the proposal had strong appeal, especially in the city’s lower-income black and Hispanic wards.

“The working people were overwhelmingly in favor of this law, and this was conveyed to the aldermen,” said Madeline Talbott, chief organizer for Acorn, a community group that campaigned for the bill.

Alderman George Cardenas, who voted for the ordinance, said: “We had to make a stand. This is good for people and good for the country.”

The bill comes at a time when many large retailers are increasing their presence in large cities.

The drive to raise state and city minimum wages has grown out of frustration with Congress, which has left the federal minimum wage at $5.15 an hour since 1997. At least 22 states have enacted somewhat higher minimum wage laws.

San Francisco; Albuquerque; Santa Fe, N.M.; and Washington have across-the-board minimum wage ordinances for all but the smallest businesses. Those in San Francisco and Santa Fe have set levels near that in the Chicago bill without driving out retailers, Ms. Bernhardt said.

Smaller retailers would remain subject to the state minimum wage of $6.50 an hour.

A legal brief prepared recently for the Illinois Retail Merchants Association said the bill would violate equal protection guarantees in the Constitution, but a legal analysis by the Brennan Center at New York University said there was ample precedent for selective imposition of minimum wages by size of business.

The bill would affect 35 stores already in Chicago, including branches of Kmart, Target, Toys “R” Us and stores like Sears and Lowes. Support for the idea started taking off two years ago when Wal-Mart said it would open its first store in the city in 2006, in the poor Austin ward on the West Side. 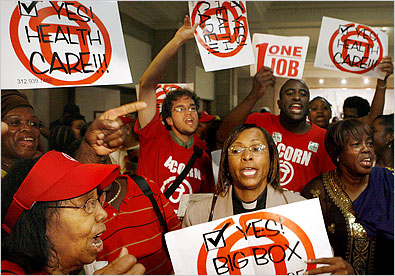