Pearl River     I’m fifteen feet above dirt looking out the window at the water that has risen up from the bayou a few miles from the Pearl River dividing Louisiana and Mississippi.  It has filled the bioswale, anchored by cypress trees off of the road, and covered the pathway where gravel was just laid days ago.  All of the trees bordering the property seem to be standing in water now.  A breeze is swaying the pines back and forth.  As bayou rises, I know it will fall, but when and how is a mystery to me.

We’re out of the danger zone on any map of Hurricane Laura’s progress, hundreds of miles east of landfall below Lake Charles, Louisiana, but not exactly out of harm’s way.  Tornado warnings extend through New Orleans, so we discussed the pros and cons between a bathroom with windows and a hall closet.

We have no complaints, because we know people well in Lake Charles, and our hearts are going out to them.  We’re sheltering a blended family of five in New Orleans now, a second cousin of mi companera.  Her first cousin evacuated to Arkansas, but late in the afternoon this gang made it to the city in a pickup and small sedan.

ACORN has had a group in the north end of Lake Charles for almost 45 years.  The neighborhood is largely African-America, and has long been our poster child for a member-leader run group over all of these years.   We know if their homes are devastated, they will be hard-pressed to rebuild, and many will be forced to move.  Organizers shed tears sometimes, too.

The Times used frighteningly effective metaphors for the danger to Lake Charles, a city of 80,000 near the Texas border at the Sabine River.  In one instance they spoke of the lake as simply a “part of the Gulf of Mexico,” 30 miles away.  A scientist referring to the oil and gas canals dug in the coast area spoke of them as a “hose” into the city, if hit directly.  The storm seems to be one of the most powerful to hit the US coast in history.

We hang on to every tidbit of news, as if a life raft.  A report that the storm surge may have only been eleven feet at the Calcasieu pass, rather than the predicted 15-20 feet, passes for good news. The slight veer to the east and the fact that Laura arrived after high tide had receded became other pieces we could grab and hold onto.  No measuring gauges at the wildlife area to the west of the city likely caught the surge, and somehow that seems like good fortune.

Two days before the 15th anniversary of Katrina, and we still struggle to learn the lessons of climate change and storm intensity.  We know in our hearts and minds how hard it has been to protect New Orleans, but we worry about whether anyone will care to protect the smaller cities like Lake Charles, Beaumont, Port Arthur, Orange, and more that line the coast from Florida to Texas.

Meanwhile I’ll keep watching the bayou ebb and flow, and despite knowing better, hope that this time will make a difference, even if too little, and too late for many. 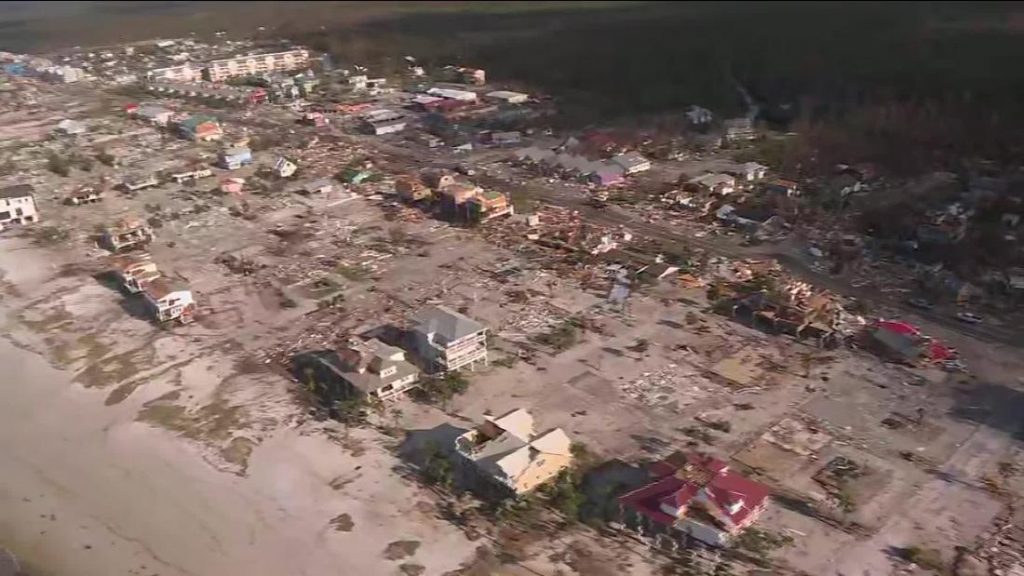 Newark     Whether Trump is on the air talking about meeting with Kanye or some other distraction, the scrolls across CNN in the airport are in capital letters:  WIDESPREAD, CATASTROPHIC DAMAGE ACROSS FLORIDA PANHANDLE.  The eyebrow above the headline says simply:  Hurricane Michael.

The reports indicated that this was the worse storm to hit the Florida panhandle stretching from the Alabama border and Pensacola over towards Panama City in more than 160 years since records have been kept.  The damage from the storm surge was expected to be huge.  Early reports indicated it was at 5 feet over high tide even before landfall.  Water had risen in Lake Ponchartrain on the northern border of New Orleans several feet above normal and city services were suspended in far east New Orleans at a great distance west of the storm.  The forward edge of the front being pushed by Michael meant bumpy skies flying into and landing in Newark airport in New Jersey far to the north.  Rain and wind have meant a steady stream of announcements on delayed flights.

Michael is only one recent storm.  The death count is now over 2000 people on Sulawesi, one of the larger islands in the Indonesian chain after a fierce tsunami there.  Earlier the Philippines had also been hammered.  Puerto Rico is still a long way from recovery.  Usually in the US, the hurricane season is effectively over by October, but there is no such thing as “usually” anymore.

The recent United Nations report warned that we can expect more wildfires, worst hurricanes, and sea rising by 2040 unless something changes drastically.  2040 is only a bit more than 20 years from now, relatively speaking less than the blink of an eye in geological and atmospheric terms.

What does it take for Hurricane Michael to give a clue to the White House and the climate-resistance cabal of the Congressional Republican Taliban?  If even Exxon is trying to get ahead of the wave, how can the immediacy of the crisis and the fear of its impact not be sweeping away everything in its way?

Meanwhile recent news indicates that FEMA, the one federal agency that should know better since they are the paymaster and mop-up crew for all of the mess that climate change brings, reportedly is paying hundreds of millions to allow rebuilding in low lying and previously storm damaged areas.  One incredible example was the construction of a prison in an area where there were frequently mandated evacuations on the justification that “the sheriff wanted it.”

The new mayor in New Orleans is facing a fight over a proposal that some part of the tax revenues currently promoting tourism, the convention center and the stadium be used to upgrade the water and sewerage system.  The system needs hundreds of million in repairs potentially, and the city’s Water Plan, that includes rain gardens and bioswales, would likely cost over $6 billion. Yet, the hospitality industry in that city feels entitled to the tax revenue subsidizing private business and consumers, so the proposal may be doomed politically. As if there would be tourism in New Orleans without drastic expenditures on climate change and infrastructure upgrades?

One example of many on the refusal of government and corporate elites continuing to need a weatherman to see which way the wind of climate change is blowing, even when it is hurricane force and devastating everything in its path.