New Orleans       Governor Jennifer Granholm made some important history for lower wage workers in Michigan by signing a bill to raise the minimum wage in that state.  The Republican controlled legislature had gotten the message — loud and clear — that a signature drive being conducted by ACORN and labor allies was likely to be successful to take the issue to the ballot this November, so they tried to jump in front of the moving train.

Frankly, we are still debating whether or not to continue to push the signature drive and solidify the victory at a higher level with an escalator.  Part of the problem though lies in resources and capacity, so we may just take the “win” and add another state on the 2006 list.

There are still issues that deal with hospitality workers and inflation, but the AP article below gives a good sense of all of this:

If Shannon Faust sticks with her job at a Lansing day care center,
she’ll get a raise in October.

Faust is one of tens of thousands of Michigan workers who stand to earn
higher hourly pay after Gov. Jennifer Granholm signed legislation
Tuesday boosting the minimum wage for the first time in nine years.

“It’s about time this happened,” said Faust, who worked on the campaign
to raise the minimum wage with a group called Michigan ACORN. “It will
be significant for a lot of people.”

Faust, 33, is a single parent and a full-time college student on track
to graduate this year. She says she has struggled to make ends meet on
the $6.75 an hour she now earns.

Granholm called the new law a “tremendous victory for all working
families” and said it should help Michigan’s economy, giving low-income
workers more money to spend.

But some in the business community say the rise in the low-end wage will
lead to higher costs that could get passed onto customers through higher
prices.

Workers at The Peanut Shop in downtown Lansing already start at about $7
an hour. But Tammy Melser, one of the snack shop’s owners, says that
businesses required to raise their wages also may raise prices in response.

“How else will they make up the money?” she said.

The Republican-dominated state Legislature passed the wage increase this
month after it became evident that a petition drive to put the issue
before voters this November was headed toward success.

The Michigan Needs a Raise coalition including labor unions, the
Michigan Democratic Party and other groups such as Michigan ACORN has
dropped the ballot campaign and is declaring victory in the minimum wage
fight.

But the coalition and Democrats, including Granholm, say more should be
done to help Michigan’s low-income workers.

The bill signed by Granholm does not address restaurant workers or
others who rely on tips. Democrats also would like to tie future minimum
wage increases to the inflation rate, which is not addressed in the new law.

“We’ve still got a lot of work to do,” said Democratic Sen. Ray Basham
of Taylor, who sponsored the minimum wage bill.

The ballot proposal would have raised the wage to $6.85 an hour in
January. Future increases would have been tied to the inflation rate. It
also would have put the minimum wage increase in the state constitution,
making it harder to change.

The inflationary increases and the constitutional provision concerned
some Republicans, who decided it would be better to pass their version
of a minimum wage hike now than to see the coalition’s version pass in
November. 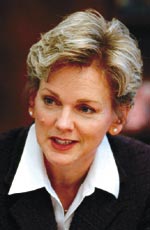